Super Tuesday not only for the elections but for the bears as well. Out of hibernation they come in force delivering the first 1% down day of the year and a 200+ point plunge in the DOW. Nice!

It was a calm orderly day that looked and felt like a lot more turbulence was to come at any time. I guess all the PPT could muster is a hold of the level and they gave up early on a BTFD gap close (which was never even threatened). STB pretty much nailed it this morning looking for 1341 support on the minis. For those that missed it, you may want to go and read it, because nothing has really changed and it covers the crisis in good detail.

I did think there would be an opportunity for a scalp pop off that support, but very surprisingly the bulls could not muster anything other than holding support today. If you did not see my SPX Cash Downside Targets post earlier, you may want to look at it. Of course the chartbook is always there. 1333, 22, 18 and 01 are the next support points on the minis. 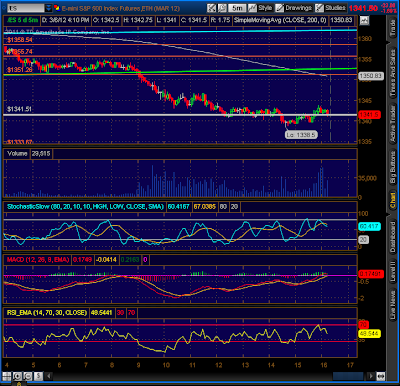 It is all about Greece. As Zero Hedge tweeted today, how long till the PSI deal gets yet another extension? The lack of rumors and news today was very surprising. I believe everyone is in shock right now with the reality that the glory days may be ending (till QE3 comes around). Right now the markets are obviously very nervous (as they should) with Thursday coming and things looking very very dire for Greece.

So it boils down to this, it really is this simple, do the rumors start flying, do they extend the PSI deal or does the SHTF? That's it. I said we'd all see the move and it would be clear as the nose on your face. I preached patience and now we've reached the moment and the gap today was your sign. I still caution the shorts and highly recommend that you have a plan and sell stops in place. They have a nasty habit of squeezing the first shorts to the party launching improbable bull trap ramps the leave everyone shaking their heads. Keep or scale into the shorts, but be very careful and always wear your protection.

What will they do to combat as dire a situation as we have seen since the 2008 LEH crisis. This is no big secret. Everyone has seen it coming. Are they prepared? Do they have a solution? Wait a minute, didn't they have like over 3 years to ensure that this would never happen again? Ah, no big deal, same MO, extend the dates and promise to throw trillions of cash at it. Sadly, I think everyone is tired of that game and cash is not as viable an option as it used to be. This thing called inflation is the monster in the closet and he's opened the door and entering the room. Without intervention, it is about to get really nasty.

SPX Daily - The chart has been screaming top for weeks and the double divergence (and my fav NYMO) last week finally gave you the clue the move was here. The daily BB's are sick narrow indicating volatility is coming in a big way. 1340 support still needs to be beat and that and the lower BB have price here. 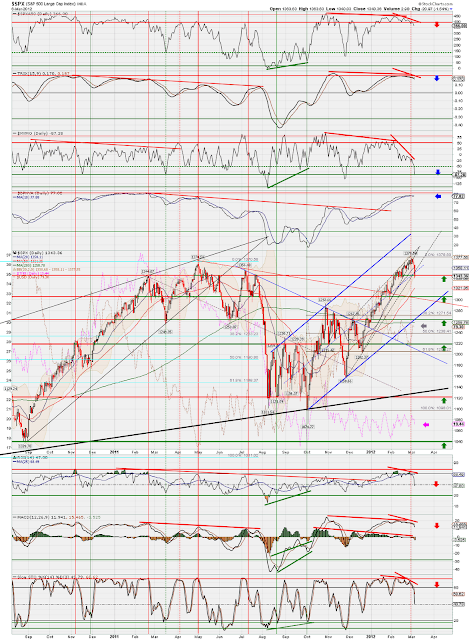 No, I have not called a top yet, although it appears very safe to do so. Kinda insane huh? Why not? Everything I mentioned above, the rumor train, their ability to extend deadlines infinitely, the stealth easing, the PPT, the improbable ramps, freakin you name it, we're dealing with rigged markets here. You can't be sure about anything other than intervention to protect the bulls. Today rocked it and the news appears to have the table set for a major major major move, but can they turn the tide one last time? I've seen it before and I'll hold my tongue a bit longer.

Odds for a top being set ~ 90%. And I still fear the Fed LMAO - no, I do not need to have my head examined. I get reality and that is this shit is rigged as hell and designed to punish the shorts to maximum pleasure. I'll say it again, we're on the cliff's razor edge right here, just like in 2008, but we all see it this time. Can they stop it?

Super Tuesday - get out and vote for Ron Paul please.

Today STB kicked off the 3rd annual Shanky's NCAA Tournament Challenge. Sign up at this link. It is fun and always good for bragging rights.

While looking thru past March posts checking to see when I started my tournament challenge I saw this rant from 2010 - you may enjoy it. It involves of all things the Greek crisis. Just to let you newcomers know how long I have been banging the drum (and there is another year before that - LOL)  .... ""Europe's rescue plan for Greece is now bank at square one. The reason the plan failed is there never really was a plan to begin with, just bazooka talk." Hate to say I've been telling you this all along. You would have thought differently from whay world leaders and the MSM have told you. I'm telling you that you can not believe one thing they say." Shanky's Technical Analysis and Market Commentary: March 2010  RC must have been sick that day but Inc and Skysurfer commented on  it.