It's awful quiet out there right now. Bernank's testimony today may bring some fireworks. A few budget releases in the EU may as well. Economic data for housing has been massaged by a professional, so you know how reliable that happy data will be. EOQ statement prints are looking lovely at this point, and SPY max pain is all the way down at 139 (AAPL is 540). We all know the markets are primed for a fall, but as long as there is no catalyst and the Fed is running the liquidity pumps at full force, there is no reason for a fall as greed will drive valuations even further into unreasonable territory.

The movement in the dollar is also doing its part for the bullish cause (the weaker the better). We all know that the lower the dollar and the lower rates are the cheaper our massive debt is. See the video in The Simple Problems Of Too Much US Debt | ZeroHedge.

Dollar - /DX - Yellow channel support off of the $72 2011 lows resides just below near $78. Upper resistance is around $81. This $3 range should dominate for a while. 200dma is below at $77.68 and strong support at $76.68 is below that. If the EU calms down one should expect the dollar to continue to weaken, but if Portugal, Spain, Italy, Greece falter or if Iran war fears spike, so will the dollar. 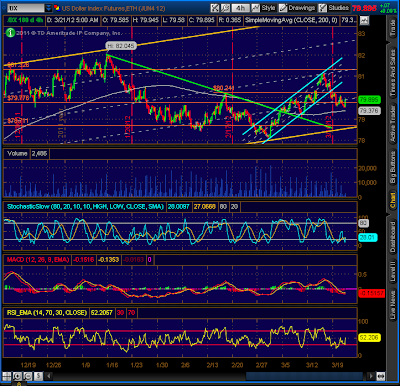 TNX - Care to see what has happened to TNX over the past 14 years on a performance basis? IMO TNX likes to be in parody with SPX, so we'll get one of two things - either SPX corrects to TNX or rates explode and the system collapses on the burden of debt servicing.

Oil - IMO the most manipulated commodity (other than gold) on the planet. Pick your target to blame; MENA fears, the surging economy (LOL), those pesky speculators or the dollar. IT is what it is. I know that I paid over $3.75 at the pump this morning and that's not good for the already struggling consumer.

Crude - /CL - is taking out blue diagonal resistance that runs from the 147 '08 high over the '10 114 high. In other words, it is trying to break out. The only other option is that it is overthrowing a massive triangle and could be setting up a collapse in the future (second chart). 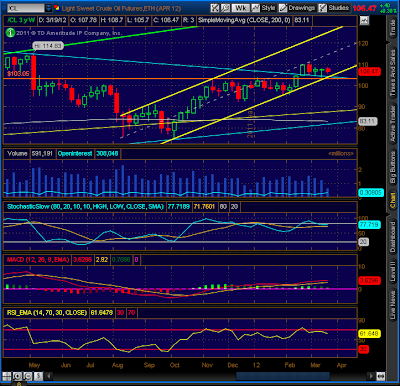 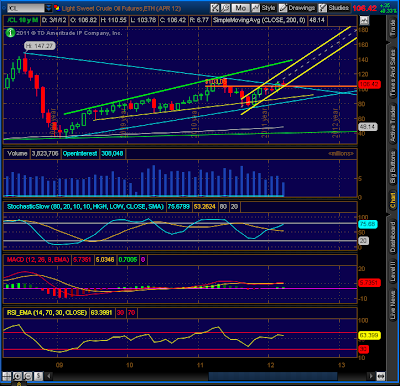 Minis - Yesterday I said there was a Shanky point at 1404 late in the evening (see gray oval) and if that got hit I may call a top. Well, nailed it and the markets have reversed so far. The purple diagonal backtest that has been happening for the past week may have run its course. If so, that may mean the worst is over for the bears. There is still one resistance diagonal left above. the pink one (not pictured) that resides near 1422 is the last thing I have that could be in play to the upside.

I'm thinking the market may want to breathe (a top possibly, but not quite ready to go there). the HnS I was talking about yesterday may be in play here as (hopefully for the bears) the right shoulder may be rolling over. 1393 is the key neckline support and the HnS targets 1378 support nicely. 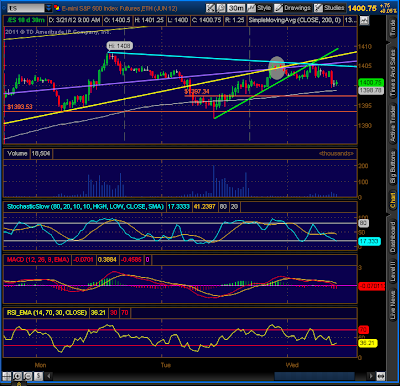