Experiment? Orderly default? One at a time please so we can manage the flow? I agree that at times I can take some of the conspiracy stuff a bit far, but on the other hand that exact line of thinking has served STB very well over the past three years on the blog. This ISDA trigger event has gotten me thinking, what if? We all know that the banksters control every event. We all know they are not going to call a personal foul on their own team.

So, what is behind the ruling of a default? I can only speculate that the big 6 banks are either protected or stand to make a substantial sum of money from this ruling. There must be something behind the reasoning other than actually following a "rule". Are they trying to get Greece out of the way before Portugal and Spain (and the rest including the USA) come knocking on the default door? Is this their attempt at controlling contagion or systemic failure across the system?

Bottom line is we've entered a brave new world where LEH or worse type triggers have been switched to ON with the advent of the CDS triggers. Bottom line is we've been living in a time where you should have been afraid. Now it is time to be very afraid. The Fed and other CB's can't print their way out of every problem. The reinflation trade has managed to stabilize things but at an expense or cost that can not be sustained going forward. At some point liquidity will have to be pulled from the system instead of injected. I believe we've reached that point.

The Fed will be switching into the final phase of economic and financial destruction. This is the time when they try and withdraw the failed stimulus and control inflation at the same time. It is raw insanity to continue QEing till infinity. So how can you withdraw stimulus/easing and keep the entitlement state alive? That's just it, you can't. They have failed. The central planning state is now in full blown crisis mode.

This brings us to the FOMC meeting tomorrow and the issue to QE or not. I contend that they will not. They can't at this time and will hold the final ace in the rigged boot to stop the next slide. They will have to be forced out of desperation to launch the final QE. It will be used to stop the next slide in the markets and a last attempt to hold the markets up into the election. As I have been contending for quite some time now, the markets can either fail at any moment or they will manage to sustain some sort of overvalued situation into the elections and then all hell breaks loose.

When QE is no longer an option there is only one place to go for funds where they don't have to create more money, your back pocket. They will be coming for your retirement and pension assets as the last gasp effort to save the system. Sadly that will just be the final fleecing of America by the TBTF banks as they suck up the last of the assets and leave everyone in the poor house.

Minis 60m - Last week and off the 1341 lows (as I always do when any turn continues) I immediately started looking for the backtest. I simply mentioned the three diagonals or any of the numerous s/r points they market structure created. It appears that 1368 is a line that the bills can not cross (without some sort of serious QE rumor or announcement). If the markets are to turn here a move to 1341 should be rather violent. 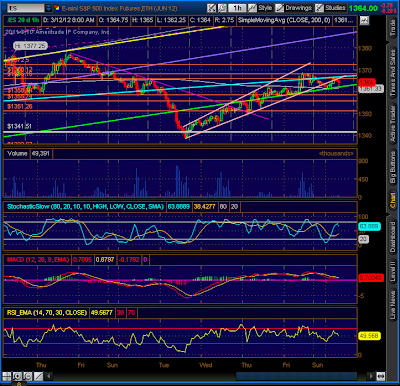 SPX 60m - My initial target areas of 1295 and 1265 where support and fib confluence are concentrated remain. The makings of a really pretty double top to conclude the run (on a nice bull trap) are all set. 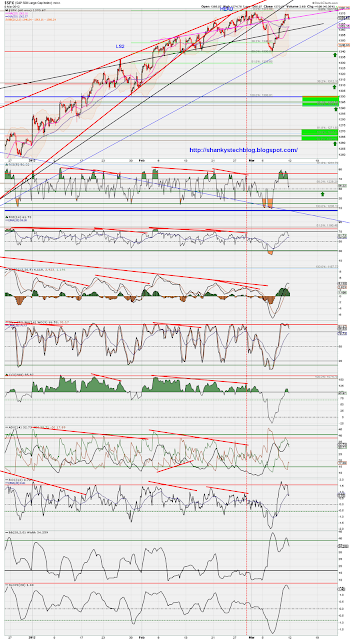 The Fed, patience and form folks are all I have preached all year. The bears keep making larger and larger runs at the bulls. One of the days Alice the move is gonna stick, and POW, the bulls are gonna take one right in the kisser they will not be able to recover from. We're definitely at a point where major downside generating events are very possible. Let's get thru the FOMC meeting tomorrow and then see if sparks start flying.

I'll do a major chart post tomorrow covering everything. We all know what the charts say and when has been a huge question from many readers. We're close. We just have to wait on the Fed to give us the green light.