Anyone else out there tired of all of this BS? Seriously, the constant rumor of QE (or  actual stealth QE), rumor driven, LTROed, cash pumped, BLS BS, recovery crap that has this market in the stratosphere where we all know it does not belong? I sure am. I know a lot of you are as well.

I don't know what the proverbial bottom line is anymore. They keep changing the friggin rules. Seriously, can there ever be too much debt? You have to wonder (not really, just sayin). How much is too much? The world was gonna end when we first crossed the unthinkable $12 trillion in debt. Now here we are a few short years closing in on $16 trillion and the markets are where? What are the growth projections for debt over the next 5 years?

Has government done one damn thing to stop the debt crisis? Have they done one thing to ensure that the crash of '08 can not happen again? HEll NO! The bankster serving, crony, elitist, capitalist BS system is more entrenched now that they were 4 friggin years ago. Lies upon lies are fed to the sheeple. As long as we are fed and kept in our pens, they will keep on stealing and we'll just ignore them rolling on the blind faith that what they do is always in our best interest.

We're all so flippin stupid it is unbelievable. I have not ranted on just how ignorant Americans are in some time. A bunch of ignorant, greedy ass, self centered, self absorbed, needy, entitled fucks is what we are. How stupid are we? Well, for starters we elected Barry as president. We did not replace crooks like Barney and Pelosi in congress when we had a chance. We allow the government to be ruled by special interest groups. We allow the government to progressively grow their police state stealing our liberty and freedoms more and more each day. This friggin nanny state is out of control and we allow it. It is BS.

I tell you what, you better forget about the markets and focus on the bigger picture. They have you looking at the markets in the left hand while they are building the sickest fascist state this planet has ever seen in the right hand behind their back. It is our fault. The bunch of lazy entitled scum we have become. All they have to do is supply us with enough iDevices and GMO foods to keep us fat and distracted.

Sooner than later we'll all wake up from our self induced comas and find that everything is not as it used to be. You are becoming nothing more than a debt serf that feeds the system. Cameras on every corner, police in the schools, laws on top of laws on top of laws the nanny state is coming down hard.

Right now they are protecting the markets because that is all they have left. The illusion that wealth and prosperity are still alive and well is nothing more. I've been building a post on the pension system that is about to implode. Social Security is DOA. How the heck are we gonna survive and prosper if all out hard earned savings are destroyed (stolen - the money has to go somewhere)? We won't.

They will come for your 401k and IRA's one day. If you think that is BS, guess what, they have already discussed it several time in Congress. They are going to steal them from you to support the system because the Fed can no longer print to support their treasury buying, yield controlling binge. That is their last resort. That will fail of course because they have not done one fucking thing to fix the internal corrupt bullshit system that they control and get rich off of.

The math is simple. Like first grade math. It all implodes unless they do something really drastic. In either case, they pretend and extend till it implodes or they go all out drastic measures to fix it (not gonna happen), the pain and suffering to come will be immense. We have only one option, sadly the lazy ignorant sheeple we are will have this forced upon us, that is to take back our government. We have this election and this our only to get it right as a nation (before our last option, a revolution). We'll fail of course as we did in '08 and place all the crony bastards back into their lofty spots of "leadership".

Good luck America, you have seven months to wake up and take your nation back. The odds of that happening, not good. I'll keep doing my part here and on the street trying to wake people up. You need to as well. We need to communicate now more than ever. WTH up people. It is now or never. This market does not matter one bit in the big picture. Look at the other hand, don't get caught up in the illusion.

Minis 5m - Here is a chart, for what it is worth. Purple resistance at 1394. Yellow double support at 1388. Old top at 1377. Then there is a wad of support in the 1370 area. Form and patience folks. When the crony BS elite f*#ks decide the market can fall, that is when it will, not till then or till something forces their hand. 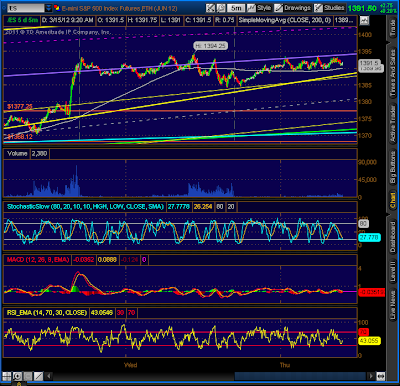