The birthers have been given their greatest gift, proof from law enforcement that Obummer's junk ain't right. I saw Sheriff Joe Arpaio's complete press conference. Bottom line is Obama, "could not pass a background check to be an employee of the Maricopa county Sheriff's Office."

The birth certificate and selective service documents are "forgeries". OK, this is not coming from fringe conspiracy nuts or the internet crowd. This is coming from a real sheriff. A real law enforcement investigation. They system is now challenging the system. Obummer can not just come out and bury it but they will. You know they will. The controlled MSM will not cover it. This is an election year and Soros et al will have orders out to bury this one.

Sheriff Joe's big problem is to whom does he turn the investigation over to at this point? This is truly an us against the world scenario. Sheriff Joe is obviously, you could see him personally struggle with the question, concerned with that as Obummer controls all things federal and military. He's leaning to a congressional investigation.

Folks, a sheriff's office, that is really serious abut this, has proof that would stand up in court that crimes were committed. the forgeries were the only evidence presented. there is more, a lot more that they are holding back. This can not be "papered" over any longer. Obummer will need to produce real original documents or he more than likely will not be on the ballot of AZ and more than likely several other states.

STB is saddened by the death of Andrew Breitbart. We wish his family the best. AB was an awesome journalist that we read often. Did you know that according to what I heard on the Alex Jones Radio Show AB's last interview may have been with Sheriff Joe? STB finds that more than interesting.

Another interesting fact about AB's death revolves around the government as well, "Breitbart’s untimely death has shocked the media world and left some to question whether or not damning footage of Obama in his youth, which Breitbart announced he had obtained only last month, will still be released." Will Damning Obama Footage Still Be Released After Breitbart’s Death? Alex Jones

So, going after Obummer will not be all that easy will it. If you think the government is not out of control and that you are safe in your cozy little homes, I suggest you watch and read this post - Two 30-second MTV ads warn Americans what NDAA authorizes under ‘law’ - Washington's Blog

In other news, an oil pipeline blew up in Saudi Arabia today. False Flag event to entice war or an honest to goodness accident. So far it is just an "accident", but some are claiming differently. Of course crude spiked to $110 (that's up $6 from yesterday's lows). http://www.zerohedge.com/ has full coverage.

In other news that disturbed me today, you need to watch this from Washington's Blog. It will leave you seriously questioning the safety and reliability of the system. Must-Watch Video On Unsafe American Nuclear Plants

In the markets, topping the Zero Hedge blog you'll find Next Leg Of The Ponzi Revealed - Central Banks To Begin Buying US Stocks Outright Starting Today | ZeroHedge. This represents raw unbridled insanity. You really need to read this post if you have not seen it. I guess with China fleeing US treasuries (China Dumps $100+ Billion In USTs In December Per Revised TIC Data; UK Is Now Russia's Shadow Buyer | ZeroHedge) all is well.

The Irish folk get it (I wonder if this is our commenter Paddy on the mike?). You have to watch this vid from Denninger ROFL! Ireland Is Getting It On Bailouts! in [Market-Ticker]. Someone finally puts a bankster in his place and asks the question that no one can answer. The last three minutes are sadly priceless as we all get the silent treatment as there is no answer to the question.

So, we have oil pipelines blowing up and oil spiking to $110 and the president with proven fraudulent credentials, Goldman Lowers Q1 GDP For Second Time In One Day and several other nefarious issues arise yet the markets closes on the highs just under 1377. Simply amazing.

Minis - purple to yellow like clockwork. Not much more I can say. This is raw insanity. More on the market in the morning. Till then i reiterate patience and form and the Fed. 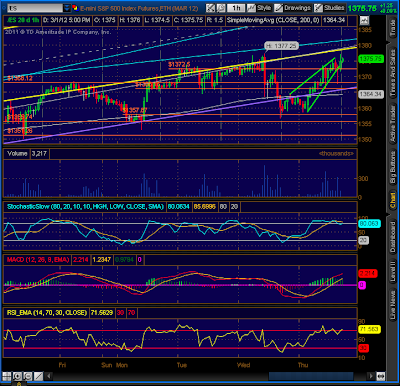