This is all I have to say today -

"And of all major inflection points, perhaps none is more critical than the just released data from today's H.6 statement, which showed that in the trailing 4 week period ended December 31, a record $220 billion was put into savings accounts (obviously a blatant misnomer in a time when there is no interest available on any savings). This is the biggest 4-week total amount injected into US savings accounts ever, greater than in the aftermath of Lehman, greater than during the first debt ceiling crisis, greater than any other time in US history."

I've pointed to this point in time for close to two years at the spot of final failure and what do we get in the face of the FC, DC, Q4 earnings and a gun grab? A record injection. Folks, if you don't get it now you truly are deaf, dumb and blind.

Nothing will change till the system implodes. We've discussed it over and over and over again. They can not stop funding the system and the costs will only continue to rise as we spiral into the money pit of doom.

To keep it brief today, like I've said all year, scalp gangsta style long or short, wait for the catalyst to lead to the "event" and then run like hell. We're in a period of unprecedented manipulation. Things were manipulated, but back in early August was when they finally crossed that line. They can't stop now and they won't.

Minis Daily - set a higher high giving me yet another top reprieve. I am not sure, but I must be in the remaining 1% that has not called a top or multiple tops at this point. STB - your market Sherpa. Couple of STB points out there 2/12 at 1460 and a new one with the addition of a new upper TL on 2/14 at 1505. I really like the 1460 one. See pink ovals. 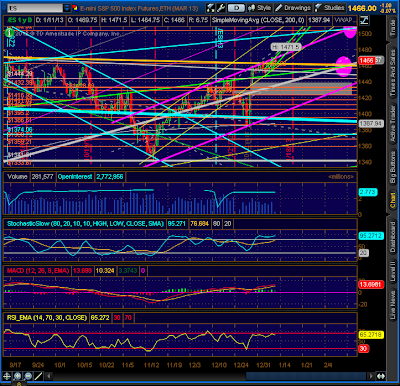 Minis 30m - not sure why I still chart this shit as the Fed is the only game in town and the market is going to do what the Fed wants it to to and nothing else. Pink upper channel resistance is still the driving force here. 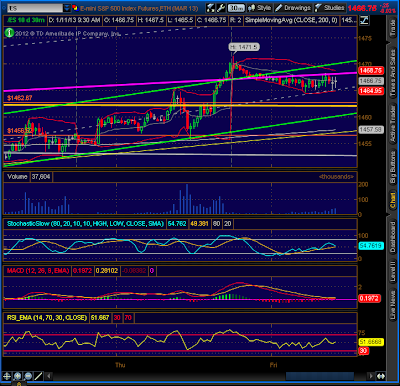 More to come below- Enjoy your weekend.