Like Faber keeps crowing about, it will all end horrifically one day. Then no one will say they saw it coming. It will have been, "impossible to see". No one could fathom that endless printing would have had such consequences as we lose reserve currency status and the death of the petrodollar goes the way of the Roman denarius.

Its coming. I think it may be time for STB to get back on the doomsday rant train of old. Screw the markets. They will turn when something (catalyst - possibly CDS - leading to the "event") forces them to, but not till then will anything material transpire.

It's unfathomable, but their control of literally every tick in the system guarantees that. As I have been saying for years, the market is the main illusion that all is well. It is the force that keeps us in our seats. As long as the pensions, retirement plans and managed accounts are holding up, we remain indifferent to whatever the government wants to do.

Well, that's the way it has been recently, but the recent gun grab (by the citizens not the government) indicates that the sheeple are more aware of the impending death trap than most will let on. That's a good thing. Herd mentality has been discussed a lot recently. Our herd tends to rally quickly and be very impulsive. I don't think we're too far away from a herd forming and a massive rally against Washington and the TBTF's.

Can we unite is the biggest question? Can we put down the ingrained left right paradigm long enough to focus on what's really important? Can we shelve gay rights, abortion and God in the schools long enough to jointly focus on the real problem - our bought and paid for representatives in DC and a lame duck president that is destroying this country?

I don't think much of that matters, cause the course we are on will force us all to the middle eventually. We're gonna be so poor and so disheveled as a society that we'll unite out of necessity. At that point there will still be two camps - the entitlement socialists and the independent constitutionalists. The clash will be tremendous. Not till we can unite will we win back out freedom. If we can't, the socialists will win and America will be gone forever (which is what your president and the UN want desperately).

Minis 30m - Was anyone at STB surprised at the GDP numbers released yesterday? Nope. We've discussed it at length and all knew that every estimate was a lie. But the markets remain drifting along post recovery highs and all you hear the MSM crow about is DOW 1400 and all is well. The recovery is finally there and growth is about to explode. The MSM is spewing the biggest lie of the recovery right now. We're bout to go over the cliff. that's all I got to say.

Green NT channel finally broke yesterday and upper blue channel resistance held for now. Even the NT yellow channel failed. Possible HnS setting up with RS still to come targeting 1475. I still like the 67 to 60 area at this time and may like worse. Note the 30m and 15m 200ma's are gone. That's not good for bully. 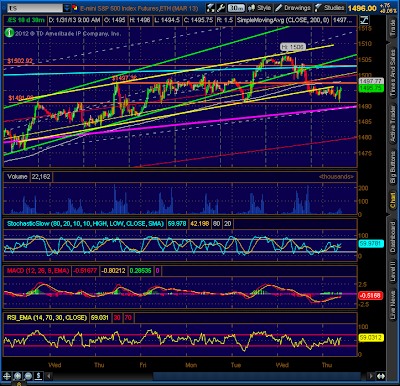 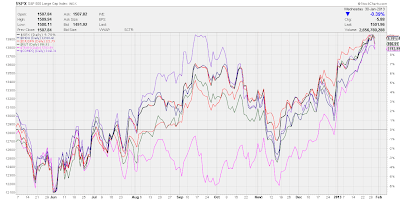 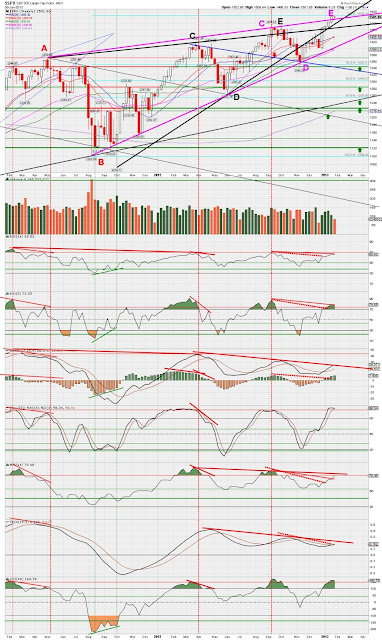