No disrespect to either, but we'll purge a college football player's social and private life to no end to see if a girlfriend hoax existed, but Sandy Hook, with far more twists and turns and impact on reality, is a taboo subject? Welcome to the show.

Why am I gong "there"? Simple, cause everything is a show, from how the government wants to influence you to how Wall Street feeds you endless lines of crap to get your fee income. I suggest you read The Most Ridiculous Forecast You Will See In A While.

I'm not capable of such eloquence, so read TD's take on this post first, then I'll Shanktify it for you. "Stanley notes, 58% of firms are expected to raise their margins YoY through 2012, and then consensus sees a stunning (record-breaking) 76% of firms will raise margins in 2013. If that eye-watering buffoonery is not enough to raise some doubts at the market's implied ebullience, then a reminder that we have seen this divergence from GDP growth and margin growth before - as, simply put, the squeezing of costs to improve margins inevitably plays out down the chain (aggregate supply and demand lags) and increases the load on government as safety net living-standard-provider-of-last-resort. The bottom line is simple - margin expectations must fall and given the dour outlook for top-line growth in a stagnating global economy, that will expectations correction will drop straight to the bottom-line. Of course, prices will be nominally defended by a herd of talking heads expecting moar multiple expansion."

We often at STB discuss falsified earnings (see BofA and $900m Loan Loss Reserves), we discuss GDP lies (with government spending - your future tax obligations brought forward - now a full 25%), the BLS BS, we discuss inflation in a can of tuna, we discuss QEinfinity and numerous other hoaxes that the government, the TBTF's and the Fed use to manipulate us into believing all is well. That is just what TD is getting at. Read this part again, "the squeezing of costs to improve margins inevitably plays out down the chain (aggregate supply and demand lags) and increases the load on government as safety net living-standard-provider-of-last-resort."

They have squeezed all the blood out of the turnip and there is nothing left. That's it. Finito. They are at the end of the rope. Corporations can not get any leaner without seriously changing business models and government can't spend any more to support the economy (well, the banks, they support the banks first and whatever trickles out goes to the economy). The math (once again) does not work. You can not expand while shrinking, so someone is lying about where we are headed. Get it?

And here we sit with the E-minis setting post crash highs this morning. What a wonderful world we live in. The lies that have been fed to us about recoveries and growth have finally played out. Their "loop" of lies has come full circle, and it is bout time they will have to start fessing up to the truth. This is impossible though as they, as any habitual liar would do, will find another distraction or any possible way out of ever telling the truth at any cost no matter how destructive.

So they capitalize on events like Sandy Hook (false flag or not - you draw your own conclusion there) to distract you from reality. I ask, what's coming next? You know I believe that a large war will be the great distraction after the markets crash and as the dollar is being destroyed. I am very afraid of what these desperadoes will do before then. I suspect another "shooting" will occur sooner than later. It will be a mass event, and it will involve more semi-auto weapons. If not a shooting then a localized domestic terrorist event is coming. They have to get our guns. They have to in order for them to be able to inflict their will upon us with the least resistance possible.

The Second amendment is a great thing, and we must defend our rights to bear arms at any cost. We are supposed to have guns in order to defend ourselves from a government that has run out of control, and we're closing in on that point. We've lost the government for the people. It is now a government for the banks and corporate lobbyists. We have been reduced to noting more than debt or tax slaves working to drive their system so they can profit. This latest iteration of the debt ceiling increase is the best example. How far can they go? You do realize that you and I, our children and grandchildren are paying for all of this? We're paying for government to be ruled by mafia banksters.

There is no future in this, so one day we will fight back. This is not about gun violence, it is about them getting guns out of our hands so we don't revolt against they tyrannical powers that control our slavery.

Not sure why I am covering the markets anymore as they are a mere distraction to deliver the illusion that all is well. Nothing is real in the Fed/TBTF manipulated market. 1476 thin morning on the minis - a new fresh post crash high. What's the catalyst? The fears of another US downgrade or a global currency war? Remember , worse is good, bad is good and good is just OK if not bad. Why, cause bad things increase or guarantee more Fed infusions which guarantee excess deposits for the banks which flow directly into the stock market. It is all horse shit, and it will fail one day. When that day comes, which will be sooner than later. you better have every penny out of their institutions, cause they are gonna take it all. Every penny!

Get ready. The top is coming. The charts know the top is coming. They may push this thing to a 15 handle. That is fine, but with each leg higher the fall will only be that much more dramatic when it finally turns. Remain patient. They will face an issue that will be out of their control sooner than later. 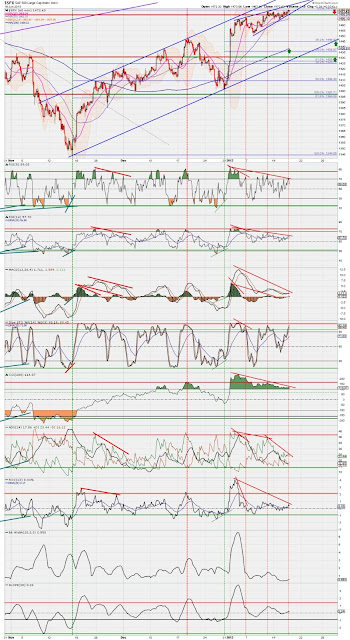 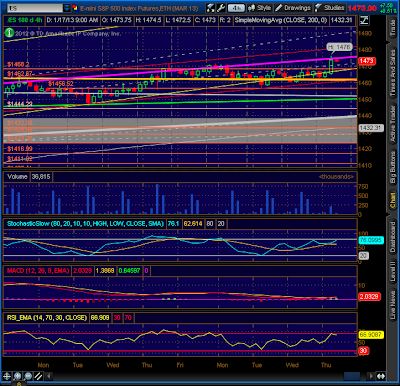 Minis 5m - All your key levels for the day are in this chart. As discussed in the commentary, I think if they crack 1485 they will get scent of the round level above and the drive for that will commence. It always does. 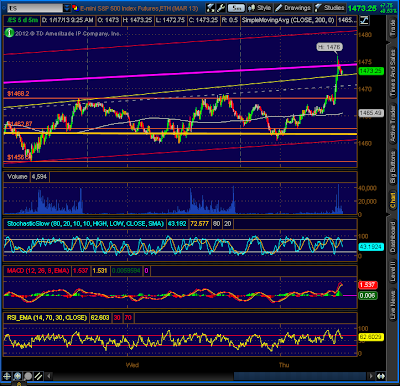