They have created a monster. That is about the only way to put it. An unregulated beast driven by crooked banksters who relish power and greed above all. Yes, the word devil comes to mind these days when I think about everything that has occurred from beginning to the present surrounding the financial crisis.

Pure evil? Maybe not that far, but spawn of evil is a definite. Watching The Untouchables last night on Frontline was a nice refresher course on the crisis and a disgusting reminder that no one can or will ever be prosecuted for anything. So you give a bunch of greedy, immoral banksters an environment with zero regulation and 100% surety that you will never be prosecuted for anything you do, no matter how bad (and that may even include murder), and what do you think you will get?

And that has led to major bubble number three. Here we sit just shy of 1500 with 467 of the 500 stocks in the S&P 500, that's 467 of them, above their 50dma. Strong baby. This market is kicking ass and taking names man! Sure looks like we're headed for record territory. Yup record territory with 50 million of food stamps, soon to be an 18 trillion dollar deficit and not one GD thing has been fixed regarding employment or the economy. I ask, what's wrong with that picture?

Heck that's not even the whole picture. Oil hovering near $100, currency wars on the horizon, MENA unrest, debt issues everywhere, BLS BS, the EU is a dysfunctional mess, to me it seems the cart/market is about 10 years ahead of the horse. I suggest the uninformed read This Is What 1,230 Days (And Counting) Of Explicit Market Support By The Federal Reserve Looks Like and then you/they may understand why current market levels reflect a fantasy or illusion and nothing close to reality. Or maybe you should read 37 Statistics Which Show How Four Years Of Obama Have Wrecked The U.S. Economy.

The market is going to bust. One slip and BOOM it will all come crashing down around them just like the last two bubbles did. This time it will be worse though cause the debt bubble that has been inflated on nothing but printing and expansion of credit markets will be the worst implosion of all.

Speaking of implosion, have we had our first CDS event? Oldest Bank In The World Plunges, Halted As Chairman Resigns In Aftermath Of Latest Derivatives Fiasco on ZH reports that, "Last week, following documentation from Deutsche Bank (and Nomura), it became clear that Italy's Monte Paschi (BMPS) bank (the oldest in the world) has engaged in derivatives with the German and Japanese banks in order to save itself during the financial crisis. The derivatives, according to Bloomberg, were done off-market and allowed the booking of large upfront gains which covered losses optically that the bank faced as European liquidity dried up completely - the offsetting 'losses' are now coming due."

No fear, Germany, the ECB and the IMF will come to the rescue and no one will be prosecuted for any wrongdoing. TD adds to the above, "Once again, years later, it seems the truth comes out - and of course we would expect no-one to go to jail - and the lying in Europe (then and now) continues unabated - as the reality of financial system health remains hidden from view."Rinse/repeat - or not? This is just the type of event (but a bit larger) that I think will start the dominoes falling. It will be an event that rocks their system at its core. Let's keep a close eye on this one for it may serve as a primer for what's to come. It involves all the major players which just might stir the pot enough to ruffle some feathers.

SPX Weekly - IT looks like the second or pink wedge scenario I have been pointing to has finally reached a point where it may have played out. Maybe that derivatives fiasco mentioned above will prove to be a bigger deal than some are leading on. Please note the nasty divergences on the weekly chart below, especially the MACD and the TRIX, they are almost a year long now. Some are double diverging and some are in overthrow mode. All together when a weekly chart gets this ugly something bad is bound to happen sooner than later. 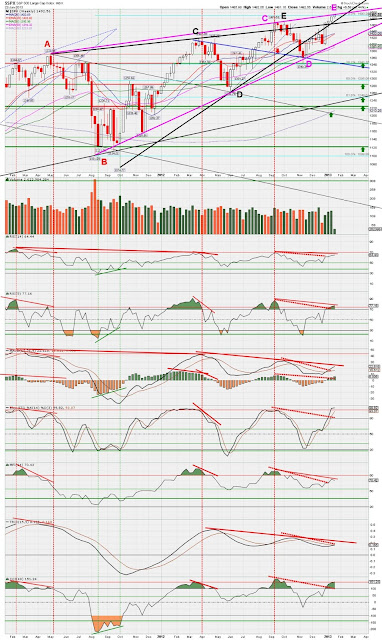 Minis 30m - Yet more or another overthrow. I'm not commenting on this chart today. This is just stupid. Yesterday I said I liked the 67 to 60 area, I still do, but maybe I'll have to let them get the round number out of the way first now they have eclipsed 85. 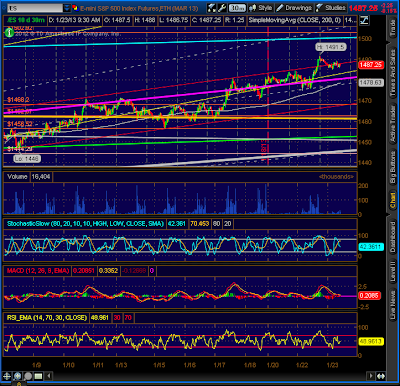