Nothing to say this morning. You have heard it all before. Debt bubble will burst and be worse than any previous. We're on road to ruin and have no way of turning around. Government is totally out of control. Markets are a big distraction to the gun grab and totalitarian takeover of our country. Keep a very watchful eye on the currency action to come as the invisible war begins to escalate.

They are destroying the constitution, taking your rights and soon your guns while the DHS buys 1.6 billion bullets and 7,000 fully auto assault rifles (the same ones they don't want you to own). Obummer is supposedly cleaning house of top military brass that will not fire on US citizens. We're moving right on into north Africa to set up base there to protect our "energy" resources. No mind the drones and bombs and accidental deaths etc... it has nothing to do with big oil.

I'm just about fed up with all of this and I believe you are as well. Heck, it is apparent from the recent record gun grab that most are awake and aware of what's happening. We're one spark away. We're close to the system breaking down and lawlessness in the streets. They are not going to be able to keep all the entitled and unemployed in place much longer.

Minis 30m - I'm working on a strategy and a top call, just not quite sure at this time what that will be. I have a few good ideas, but not settled on one yet. Either way, a top is close. THE top is close I believe.

Green NT channel cracked last night. Pink at 1486 will be first support. Then there is a massive hole to the area I like near 1460.

SPX Daily - I'm not seeing anything out of the norm scanning all the charts. Everything looks like crap, and it is a miracle they can sustain any sort of price support up here. Well, not a miracle cause we all know why they can. As I say all the time, we have to get a catalyst. 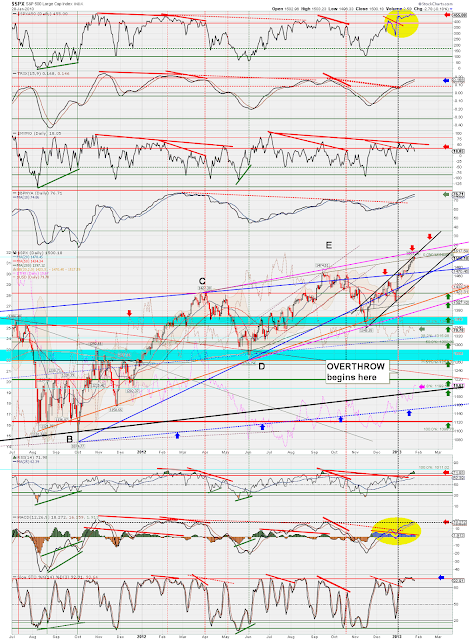 I may do a chartapalooza soon. I have not done one in a while and it may be time to pull it all together.

Don't let the markets dominate your focus. You better be watching the government and their power grab. This is beyond serious right now as your freedoms and liberties are under direct threat from the politicians we elected an put in office.