Ahh, back in the saddle again. Let's light this candle and get it on.

Something I have wanted to mention, that I'm sure you all have noticed over the past couple of years is the hidden inflation we're all experiencing in various goods and services. Have you noticed the XL shirts are no longer XL size. Or have you noticed that breakfast bars are in the same package but a few oz's lighter? How about quality control? All those crushed up M&M's at the bottom of the bag that used to be filtered out? Those Snickers bars that are crushed on the end you would rarely see? (and now you know my two favorite candies)

What got me rethinking about this was the ZH post Guest Post: Inflation Hits Coffee As Brewers Secretly Swap Robusta For Arabica. There are lots of forced "efficiencies" being created at the corporate level to combat the economic crisis. Bottom lines and workers are being maximized like never before. Sadly this is beginning to show up at the consumer level in inferior or lesser quality goods and services than we had become accustomed to.

Ahh, the 'ol bottom line. How far will Wall St. force corporations to go before the system breaks? The financial world seemingly revolves around stock price and increasing shareholder value, and at this time I'd say corporations are the leanest they have ever been. Now the question becomes, are they too lean and if so, can they put some fat back on? (Uh, no)

I don't know about you but I prefer my supermodels with a little beef (in all the right places) and not appearing anorexic. Right now our leading companies have ribs poking out and knobby knees they are so thin. When malnourished nothing performs the way it should, and I believe  this quarters earnings are going to show just how unhealthy the system has become.

Now, earnings have become some sort of a joke since the FASB rules changed to mask the financial collapse in 2009. I'll say it again, revenues no longer matter just hit the number. Well, that may be the case as far as reporting goes, but having a majority of SPX companies with repeated revenue misses over the past three to four years may finally come home this quarter and in the ones to come.

Let's not get into any of the (seriously) lack of regulation issues in this discussion. We all know there is no regulation and if there were the system would have collapsed in '08 like it should have.

With earnings beginning tomorrow evening, the markets at a precarious top and the debt ceiling issue less than two months away, a major turn may be in order here for the markets. The first miss may just start an avalanche. For once I'm not going to caution to wait till AAPL comes out. In this case AAPL may be the final boulder that brings down the rest of the rubble that has been precariously hanging on.

What will a disastrous earnings season and market collapse bring? Well a panic of course. What will that allow? An easier resolution to the debt ceiling issue. BINGO! Just more financial blackmail and manipulation ahead folks. Stay one step ahead of their game.

Now, we've been discussing (for a long time) the fact that they can't afford the slightest downfall. They are totally desperate at this point. We're in a period of unprecedented manipulation (as I warned back in early August). Can they hold the markets up? Can earnings actually beat the lowered hurdles manipulated by the analysts? (more on this tomorrow) Will they try to fool us again? (LOL)

Anything can happen in this market, but at this time with the technical set up and forecasted earnings disaster, maybe, just maybe, it is time for the bears to growl and reality to bite.

SPX Daily - I did some serious updating to about the to 50 charts in the chartbook recently, so I plan on bringing you some more detailed and deeper analysis than I have been delivering recently. A thorough review has shown me that the turn is coming, that they can't hold on much longer and the set ups is possibly worse than in any of the prior major tops. I've delivered some of this evidence already, but much more on this as the week goes by. 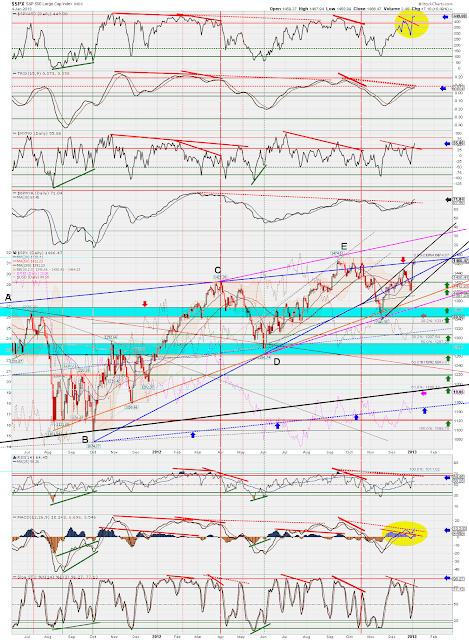 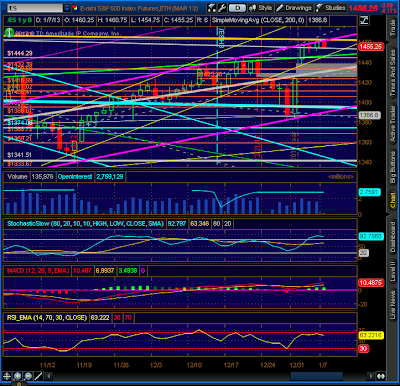 Much more to come this week. Glad to be back in the office. Many thanks for holding down the fort in my absence.