Well, I was looking for 1456 as support yesterday morning. I'll take a day late. Minis continue their minor tumble thru various near term and long term support points. I expect little movement on the eve of JPM and GS earnings reports. In fact, you should probably stay away (unless you are a scalper) till they come out of the closet report. Should be dullsville till then.

Something I have been throwing out for over a few weeks now is the thought that they would have to somewhat crash the market (in yet another form of blackmail) to get the fear mongering up enough to make the debt ceiling passage a non issue. Then I saw this in ZH this morning, Fitch Issues Another Rating Warning For AmericAAA. "With precisely one month left until the early bound of the debt ceiling crunch and a possible US government shut down and/or technical default, and with M.A.D. warnings from the president and treasury secretary doing nothing to precipitate a sense of urgency (which will not arrive until there is a 20% market drop, so far consistently delayed but which will eventually happen), here comes the most toothless of rating agencies, French Fitch" (emphasis mine).

Then there is the other side of the coin we've all observed mutually and discussed to no end - they can not let the markets fall, period. The Fed is not in a position where they can allow one iota of negativity to hit this market. Retail is gone and with AAPL trading at the $500 Mendoza line (which used to be 600 and is soon to be 400), all it will take is one headline to cause a bit of panic which will set off the algos and poof, we're in flash crash mode in the blink of an eye.

Pickle? I'd say so. The farce is coming to an end. Sure they could drag it out, but the farce will only last as long as the rest of the world will put up with it. We can only print so much, then the cost of said printing (which it already has) will catch up to us and it's game over for the dollar and the US economy. Really, how has the world not given up yet on our fiat backed by military might? Apparently Germany has had enough. It Begins: Bundesbank To Commence Repatriating Gold From New York Fed. If you don't think that is a big deal and possibly a first domino, think again.

Well, earnings will rule over all the BS and hype surrounding the debt ceiling today and tomorrow. What sort of magic will they pull out of their hats this time? DC and gun control will remain distractions the remainder of the week with a few big boys left to report.

Minis 15m - Pink upper NT rising channel support held and now price has reversed thru both rising NT blue and green channel support. Yellow upper market resistance briefly busted, but price is now back thru that as well. A small (blue) falling wedge has developed. How/if/what this morphs into is anyone's guess at this time. I was looking for 56 yesterday. Sorry, I was a day early. Nice pop off the number so far. Not sure if it will hold or not. There are several items that would like to be backtested above. That green support diag below is the old double HnS neckline we've been following all year - how cool would it be to get a third HnS off that diagonal? 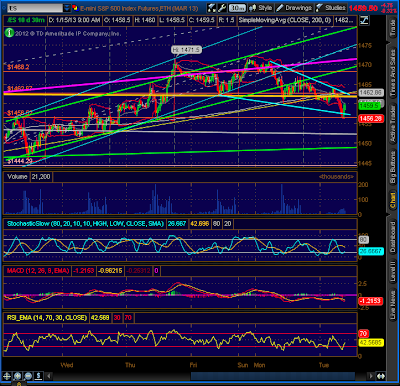 Minis 4hr - Here you can see the larger pink channel, the gray island gap and big blue below. These are you major support areas in case something goes wrong. 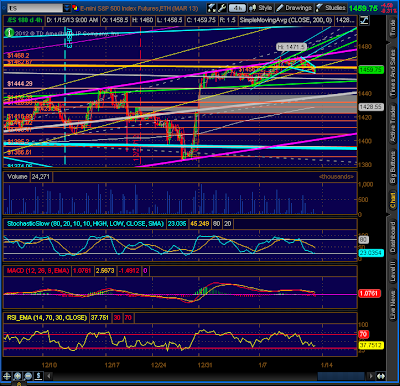 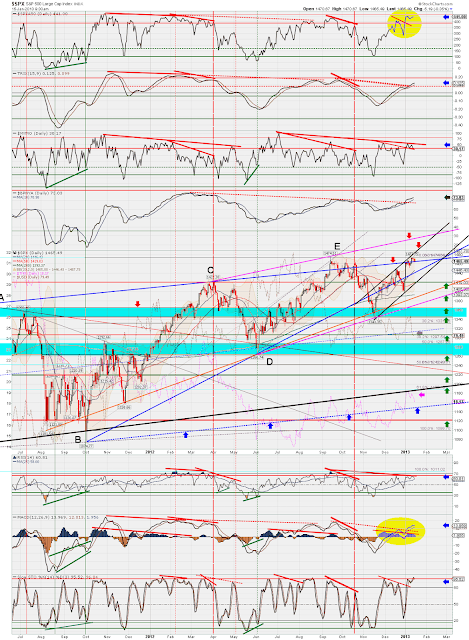 Something you all should keep an eye on prior to the inauguration (pipe dream I know, but we must hold out hope) h/t to HR below - BREAKING NEWS! FIFTH CIRCUIT COURT OF APPEALS TO HEAR THE PETITION BY ATTORNEY TAITZ TO EXPEDITE DEFAULT JUDGMENT AGAINST THE COMMISSIONER OF SOCIAL SECURITY MICHAEL ASTRUE AND RELEASE OF SS-5 APPLICATION FOR CT SSN 042-68-4425 FRAUDULENTLY USED BY OBAMA. "Additionally, investigation by a licensed investigator Susan Daniels and former Scotland Yard officer of the elite anti organized crime and anti communist proliferation unit  Neil Sankey showed that Obama used other Social Security numbers, which were either bogus, never issued numbers, or numbers of deceased individuals. Noteworthy is his use of the Social Security number of Lucille ballantyne, deceased mother of the Actuary of Social Security Administration Harry Ballantyne, whose activity warrants investigation. Aside from the number 042-68-4425 used by Obama as late as 2009 in his tax returns, several other numbers issued after this number warrant investigation." That's ADDITIONALLY to the Connecticut number he's under now.

Have a good day!