A few weeks back I brought this up in conjunction with a ZH post, and last night Mrs. Shanky was letting me have it on the subject as well - hidden inflation (remember my favorite candies and breakfast bars rant?). One of the things that has sold her on the fact that I am not a lunatic and have some common sense was when I had her (and recommended to the STB readers) to start buying stuff, anything, back in 2010 before it started getting really expensive.

Yesterday she made some tuna for me to munch on. I got the container out of the fridge and heard, "That's 5 cans of tuna." and in a tone that I know usually leads to more lovely commentary to come. A few bitter moments later and after a few nasty glares, I had heard about white and dark and oil and chunks and flakes and all this stuff that only a shopping/cooking expert could know.

She was pissed. She felt cheated. Where did her tuna go? Were was the quality, white chunky, less oil (blah, blah, blah ........ and a few more blahs) tuna she used to get. This tuna sucked and to make things worse it now took 5 cans to make what 4 used to make.

Then she looked at me like I knew the answer. Hugh? Uh, where did the tuna go? I paused, about a thousand things ran thru my mind and out of desperation I said, "Fukushima".  Wrong answer. I had panicked. Well my answer was partially right, but let's not go there. The tuna went the same place the missing third of my breakfast bars did. It simply disappeared. But. but, but I paid the same or even more but got less? I know honey, I know. But, but, but what happened?

Well, the Fed happened in 1913, that's the first problem. She stopped me there and said, no, where did the tuna go? It went into the stock market.

OK, continue she said. Let's try this - Charlie tuna is a business, the economy sucks, the boats cost more to run cause of oil price manipulation from the likes of JPM and the Saudis and BS CIA wars in the middle east.

OK, continue. Wall St. demands shareholder value and sets lofty earnings numbers that must show growth or their stock get crushed. In order to do that Charlie Tuna's business had to fire thousands of workers.

OK, continue. Well, that worked for a while in conjunction with some creative accounting, but Wall Street wanted more, and with the advent of Obummer care they had to cut even more cost, so there was one place left to go - your can of tuna.

OK, continue. Well in order to get margins right, balance the remaining slave labor they have left and manage healthcare costs, the can of tuna stayed the same size but what went in it changed. The oil content increased but the quality of the tuna and the amount of tuna inside the can decreased.

She says, "So the chunky white meat got replaced with the flaky stuff they used to put in cat food?" Bingo! Ding,ding, ding! Ring the bell. And there you have it folks.  Inflation in a can of tuna.

Inflation is starting to show up everywhere. Don't believe the horse crap the government is feeding you about no inflation. No Inflation In December BLS Says, my ass there was no inflation! I guess the people at the BLS don't eat tuna or breakfast bars. The consumer is getting crushed on two fronts. First from currency devaluation (which is about to go into an all out war - see Japan), and second thru inferior products.

ZH posted Guest Post: Inflation Rocks The UK As Beer Gets Watered Down this morning. "Products are simply declining in quality, and in many cases these declines are being accompanied by price increases." says it all. So go ahead and believe the BLS BS and if you can ignore reality. Costs are going up cause Wall St  and the Fed are causing them to.

I really need to do a post on preparedness and the crisis to come. Now is the time, if you have not already, to start loading up on a few extra cans of food every trip to the store. One reason, it will save you money as cost will continue to rise as portions and quality will continue to fall. Two, there's not going to be any food one day on those shelves, and you better have at least a year supply around the house so you and your family won't have to go all Donner Party on the neighbors.

Daily SPX - Same 'ol junk waiting on O to steal our guns (which will be announced this afternoon) and on the debt ceiling as we wade thru earnings season.  Basically everything is on hold and price apparently has no interest in going anywhere. 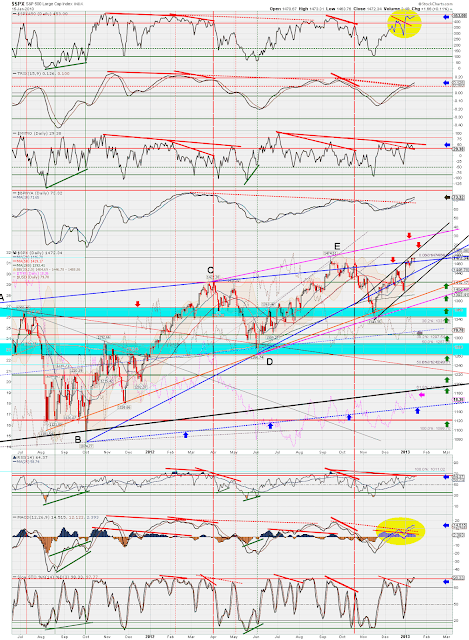 Minis 30m - I remain in bear mode with a high degree of caution for reasons you know and are discussed here all too often. 1456 is key support IMO and if that goes I think 44 will be the next stop. As for upside, well the JPM and GS beats (illusions you can call them) did little to bolster price this morning. I have no idea what they can pull out of their hat to drive upside. Maybe a Fitch downgrade will do the trick? I believe Mr' Market is finally catching on to the Fed's tricks and the broads are starting to fade some of the manipulation. I think the end is closer than it appears in your mirror. 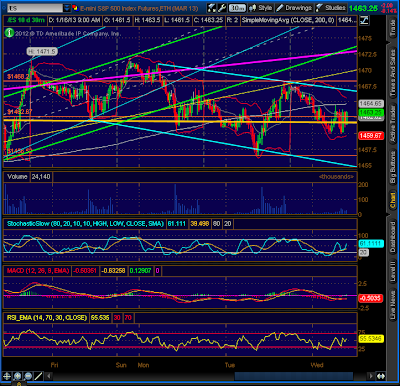