I can't figure out if I have writer's block this morning, if I am simply too disgusted to write about this trash we call a financial system/market anymore or if what wants to come out of my mouth describing the markets and our whole situation would be so harsh and foul that your computer may melt as you read it.

All is well? No shit? Really? You want a side of horse meat with that Mr. Muppet? Here I go on another hidden inflation rant. At least we're moving on from candy bars and cans of tuna. We're moving straight to horse meat, but before we get there let's take a brief look at the post The High Price Of Understated Inflation on Zero Hedge. I was pleased to see the post open with, "The reliable data which policymakers and the public need if effective solutions are to be found is not available. As Tullett Prebon's Tim Morgan notes, economic data has been subjected to incremental distortion;". Why not just cut straight to saying the BLS data (or pick your/any government supplying said data) is BS.

They can't tell the truth about what's real. That's if they can even identify what's real. One would think in this day of real time everything and the advent of pre-crime technology the government should be able to have the exact pulse and not some contrived guess on what's going on in the economy. Shit, if they can track every breath of 330 million citizens then you'd think tracking the sale and movement of products and services would be a piece of cake.

If they told the truth about what's real then the truth would be something we could not handle. This is not a post about the BLS BS and the constant lying about economic data to get us to believe all is well, so let's get back on topic. This is yet another post about hidden inflation and corporate maximization of revenues in dire times. But before we get to the horse meat let's review the last meat disaster here in the US. Anyone remember the Taco Bell Meat 'Mixture' Lawsuit from this time last year where some consumers had the gall to take issue with paying full price for, "the "meat mixture" that Taco Bell uses in its products "contains less than 35 percent meat,"?

Well, now the Europeans are apparently a little pissed off that they have been eating horse burgers and not hamburgers (no not ham as in pig, but in real beef). Yes, from Burger King to delis in groceries, it appears that up to 30% of the beef has been replaced by meat from those lovely critters our ancestors used as primary transportation.

Read Horse meat in supermarket burgers linked to Dutch suppliers. "Officials believe the horse meat in beefburgers sold by British supermarkets came from contaminated “filler” imported from Holland." Ok, and how did they discover this? "Dalepak Hambleton, in North Yorkshire, supplied beefburgers containing traces of horse DNA to supermarket Iceland." OK, horse DNA in the beef. So, who's exactly inspecting these plants and can tehy not tell the difference between a horse being slaughtered and a cow?

Ahh, government workers, they are the best. Or is it yet another case of corruption where everyone is paid off from the inspector to the constable to the clergyman to the politician? This is one case where government regulation and oversight is welcomed. Hey, here is an idea, why don't you take all those cameras off the streets and out of the subways and put them in the meat packing plants where the food is processed? One would think that tainted food supply could be far more dangerous than say a bomber on the Metro?

Bottom line, we have another example of cost cutting to mask inflation. corporations minimizing cost to maximize profits in a economy that is unraveling by the second. I fully expect to see many more examples of this to come as corporations are pushed to the limit and government oversight is either non existent or paid to look the other way. Get used to it folks, the days of extreme excess are fading fast as the bill for the debt bubble that provided all the momo and free money late last decade is coming due (and guess what - we don't have the money to pay for it).

I'm not covering AAPL except for discussion in the comments. They are DOA and the system will have to adjust. At this time their idea of adjustment is to print and infuse the banks with more money to fill the markets to avoid any sort of broad sell off, so that is what you will get. $442 is gap support on the AAPL.

Minis 30m - The battle with the yellow upper market resistance diagonal is over. the battle with NT (off the November lows) upper pink channel resistance is still waging. the battle with even nearer term red upper channel resistance is still in play and there is a new green channel up. You make what you will of all of that. I liked the 67 to 60 area the past two days and still do. I'm a bit astounded with the AAPL issues we're not sitting there now. As I called on August 2nd, we entered a period of "unprecedented manipulation". Is there a better example of this right here? 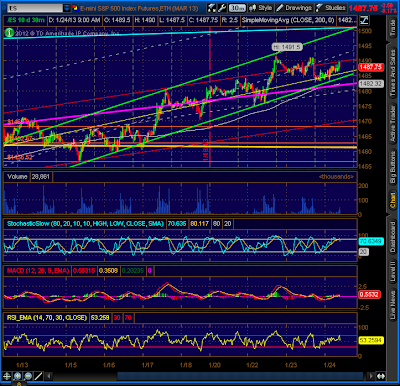 SPX Daily - Do with this chart what you will. I think we're very close to a top of some sort. 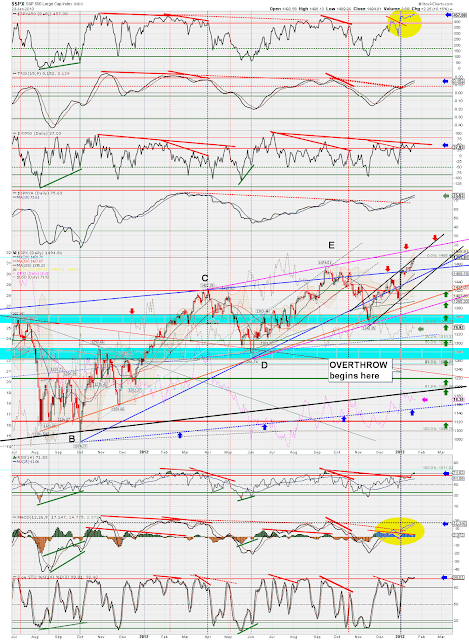