Well, we have a new(ish) president and while most were focused on him being sworn in (publicly) on MLK day, I personally thought his being sworn in on Blue Monday (the most depressing day of the year) was much more appropriate. Not sure if Jupiter's conjunction with the moon last night was a heavenly sign or not.

Not sure where to go with market discussion today. I think it is more appropriate to focus on the coming dollar devaluation, coming inflation and the government's rapidly developing police state. The markets are a mere distraction to reality. With the advent of things like Kindergartner Suspended Over Bubble Gun Threat making even the MSM (that may be my first link ever to ABC), maybe things ARE getting that bad.

The charts say we're closing in on a major top and so does reality. Well, that is if reality even exists in this world anymore, cause the central planning cabal now controls everything. We are at their whim, no more, no less. Not until they fail will this fantasy end, and when it does it will unveil the darkest most terrifying reality. Till then all you can do is prepare for the worst, note the totalitarian takeover and deal with it the best you can.

Daily SPX - Nothing new, still in overbought overthrow mode threatening 1500. That move Friday was nuts. No one can explain this exuberance or false levitation, other than the Fed and the TBTF's manipulating price. I believe we correct sooner than later and when we do I should call THE top. 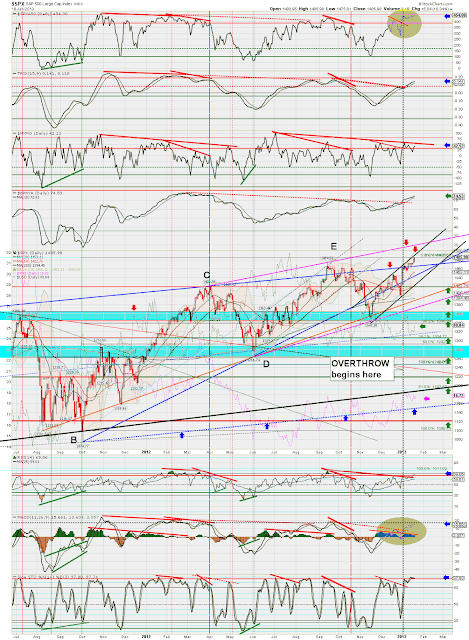 Minis 30m - Pink upper channel resistance off the November lows still dominates the upper end. I have said if we got over 85 she'd get 1500+. Well, price hit 84 and change, but not quite 85. The bears have run out of places to make a stand, and this is the last spot or else. This chart also gives you all the hot spots for the day. I think something is about to drive price down here, so I'll start out the day looking for a move to the 68 to 60 area. 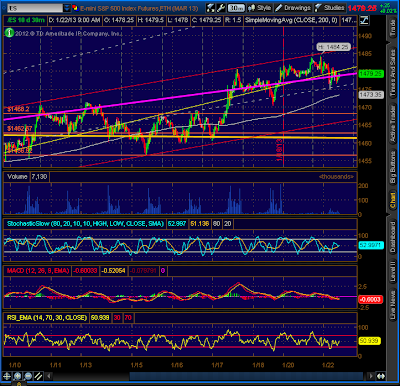 Look, all you can do now is shake your head, accept that they are in total control, know the markets are totally rigged and deal with it till they fail. They are ramping it for a reason. They know something bad is coming and they want you totally distracted for when this hits. They need as much headroom as they can get, so they are buying it up hand over fist right now. Remember this is nothing more than your future tax dollars at work right now, and when this fails the failed economic policies are going to devastate this nation for decades.