Off topic for a bit, because I find it very interesting with all the gun grab stuff going around that these two stories have not gone mainstream or viral for that matter. Let me clarify, the MSM won't pick up on any of this.

First, Keith Ratliff, Manager of FPSRussia found murdered. "FPS Russia is a driving force in the pro-gun movement concerning youth. The videos published are very pro-gun, and reach literally millions of impressionable youth showing them that firearms just aren’t for people in movies or video games." Keith was murdered mob style, tied to a chair and single bullet thru his head with all his weapons left at the scene. Keith was awesome and a fan favorite having one of the top three Youtube channels. Maybe it was the fact that he was pro gun and reached so many. Maybe it was the fact that he showed videos like this one, one with the newest drones that may be flying over your back yard sooner than later.

Then I ran across Prominent rifle manufacturer killed in mysterious car crash days after posting psych drug link to school shooters. "John Noveske is one of the most celebrated battle rifle manufacturers in America. His rifles, found at www.NoveskeRifleworks.com are widely recognized as some of the finest pieces of American-made hardware ever created."

So, what do you think? Coincidence? Could it be? Two very high profile pro gun activists eliminated? A message? A statement? Who knows? You draw your own conclusions. Mine is that with the NDAA and all the SH stuff (watch) and gun grabbing about to go down (combined with the economic collapse), it is quite possible history may show that these were the first deaths in a possible civil war. One thing that is for sure, if a few more pro gun folks go down the odds of coincidence fall off the table very quickly.

Earnings season goes into full force next week. As usual, I hate earnings season. It simply adds a period of extreme manipulation (low hurdles courtesy of the TBTF analysts) on top of existing extreme unprecedented manipulation. The charts all say a major top is near. The problem with that is the Fed and the TBTF's see them as well. I have speculated that in order to get the DC passed a fall may be in order to scare or blackmail congress into acting. Then again, it has been argued that "they" can't withstand any sort of downside volatility ever again. 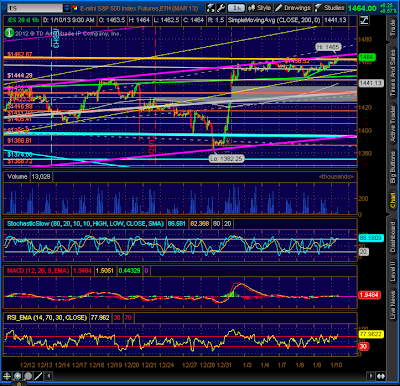 SPX 60m - For comparison. Note the divergence here is bout to worsen with the markets being up on the bad employment report this morning. 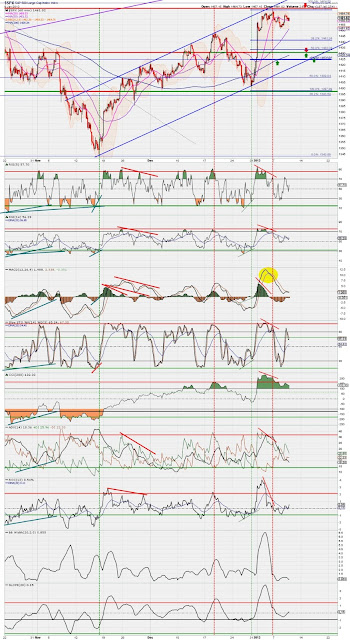 Not much else to say. the gun grab is coming and that may just be the catalyst I've been waiting on. throw in the DC deal and earnings to add to the confusion, and STB will do what he's done for over a year now, sit, wait and scalp the action either way (what they allow us to have). One day natural market forces will take over, but till then they are in control and don;t you forget it.