I'll be on vacation the rest of the week. so my posts will be limited unless something blows up.

I have no comments on the cliff resolution (if there really was one).

SPX Daily - That candle (23 point romp) the last day of last year could count as a reversal candle. We'll have to see about that. Just be wary. Very unexpected spot for such a move. The bulltards are really getting sucked in is my opinion. 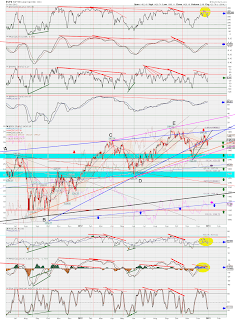 As for the new year, I've been calling the first quarter of 2013 as far as I think they could carry out the facade. Bearish? I'm down right scared shitless of what's coming this year from the markets and the government. I'm on vaca. so I'll hold off the rants till next week. And I do have a few coming.

Remain wary of the Fed. They may need a lift pre earnings to get some clearance. I expect the news flow to be miserable and to worsen as far as I can see.