Let's get it on! Listen to all Inc's ol school rap on the AD last night and now you gettin sum N.W.A style STB in da monin - hit it.

Gold - Blue channel down into the depths of support diagonals off the '08 lows. Better make a break north soon or hold 1569 cause the next stop will be 1470. No fret, just makes for better buying opp. Let it fall. Please fall. STB wants to gets mo gold at lower prices. It is the only thing worth owning these days (with a side of silver). 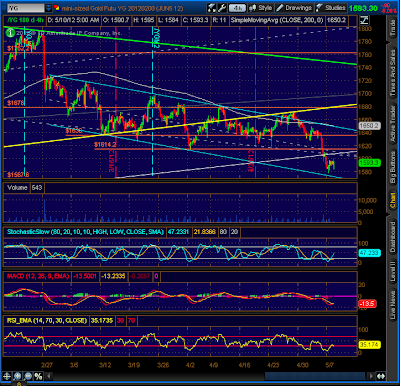 Silver - Trying to hold blue support here while under green channel resistance. At this time $27 to $26.50 is pretty solid support. Silver with a $2 handle, are you kiddin me? Load up for the long haul baby. Coins preferably. This will be the thing that keeps the groceries coming when the dollar goes POOF! Plus you'll be able to barter like a mofo with this stuff and the gumbmint won't be able to trace yo purchases. 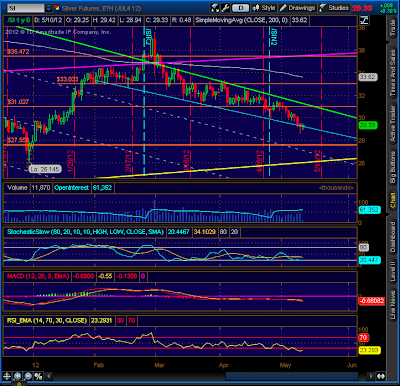 Oil - Let me hear the speculatas holla as price falls thru channel support. Say OWWWW! OWWWW. $95 is the line in da sand. $85 is the spot where LT support and Chavez can't let price fall under or his welfare state crumbles, so that will be as bad as it gets (unless the Israelis and the Iranies gets ta goin at it). 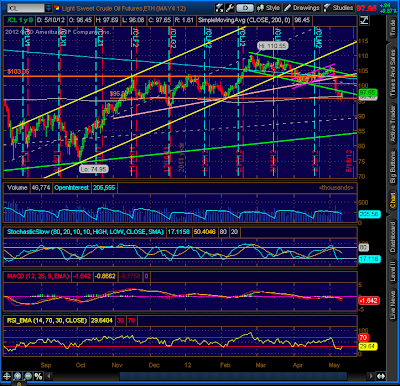 Dolla - Holla - at resistance and where the Fed has seen enough. Not sure how much more pain Bernank and the crony bichez r willin ta take. It should backtest that busted green diag but no lower than $79 at this point. the EU is blowin up and that will keep a floor under the king of fiats. 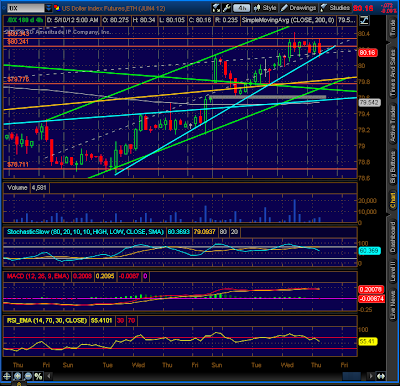 EUR/USD - This DOA POS ain't worth wipin you mama's - never mind you know where I'm goin wit dat. $1.268 grreen support diag - if that goes (and it should) $118 will be the next stop and from there, well, let's just say this experiment is ova. Soverign coin will be back en vogue before the end of the year. Can you say Wiemar? 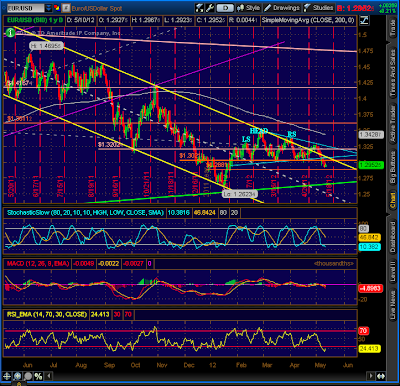 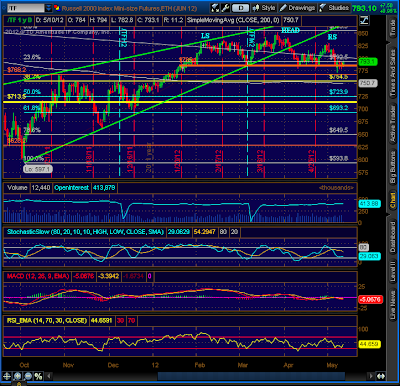 /ES - 4hr - Are the bichez at the Fed about to launch another right shoulder into the stratosphere and destroy the 5th HnS set up? They can do anything they like, but I do not think that a launch is immanent (until the QE bazooka is shot and that may not even save the markets this time). Anyway, here is the HnS and price is backtesting the neckline (green). 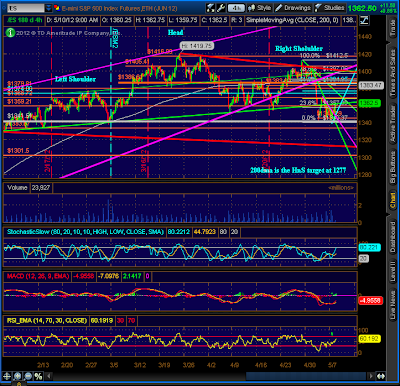 Minis 30m - the area around 1360 is first resistance. the next stop looks like the 1374 area this afternoon (possible STB point) where green diag resistance meets blue price resistance at the 50% fib. Possible wedge or channel forming. I'll keep you updated on that in the comments. 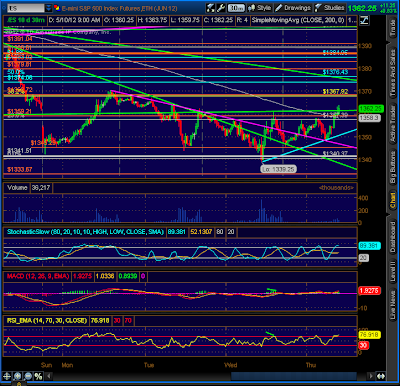 STB has been all over 1341 for weeks now. That was my line in the sand and thus far the crony ass bitchez at the Fed have held that point. Dey bees in desperation mode now and will use the PPT to defend this point. News is calming down (although the times are worse than ever don't let that fool you). More specific calls and charts below as the day develops.