Look, it is so basic. If you do not get it by now you are a lost soul and need to get your head examined. It is all bout easing and nothing else. The markets are rigged and respond like Pavlov's dog to the slightest mention of the Fed printing to control market price movement.

In the commentary today I posted, "Who does this sound like?"

"With Europe hitting the skids, EURUSD at multi-year lows, and the US equity market down a whopping (and terrifying) 9% from its March highs, it seems the market remains increasingly hopeful that this time will not be different in that the Central Banks of the world will print and save us once more." QE's Long Shadow Is Getting Shorter | ZeroHedge

Now STB this morning, "There is really not much to say as the markets hang in limbo surrounded by bad news already having fallen just shy of 10% to the 38% retracement of the climb off the 1100 close in October. Twist is still on and ends next month. The FB IPO is done. Everyone appears to be waiting on the Fed and ECB to make a move or signal there is more easing to come. Why else would the markets have rallied the past few days?"

Further in that same post TD states, "we estimate (based on QE1 and QE2) that the S&P could trade down to 1100-1150 before we see Ben step in to save the world" which is a bit more pessimistic than the 1170 worst case target I have been spewing since before the 1420 top. Recently I posted that I was looking for a manufactured crash since almost this time last summer to allow for the easing call to be a layup. I got a crash and easing, but this time it appears more are coming around to my way of thinking (and beginning to use the term 'exogenous event' we coined years ago).

Today's late price rally was nothing but rumor based BS. Something about a FDIC like insurance program for the EU. LOL, who's gonna pay the insurance? the insolvent governments or the money printing ECB? LMAO. That's funny. As Reality Recedes, Rumor Rampage Returns | ZeroHedge. What's sad is that rumors (and BS government data) are the new reality and we must deal with them as proven over the past two years. You get some fear and an oversold market and the rumors get really ripe, and thus you get a roughly 190 point pop in the DOW to close down - get this - 6.66 today.

To understand the major issues on the table in the EU right now you should read Markets slump ahead of key EU summit - Telegraph "European markets fell heavily on Wednesday morning as investors doubted an EU summit would lead to a solution of the eurozone's problems." Since the elections changed the landscape in France and Greece the strategy that the troika followed for the past several years has been turned upside down.

To give you a quick reminder of how bad things are on the other side of the globe ,"The ratings agency Fitch on Tuesday lowered its assessment of Japan’s sovereign credit to A+, an investment grade just above the likes of Spain and Italy, and criticized Tokyo for not doing more to pare down its burgeoning debt.

Japan’s public debt will hit almost 240 percent of its gross domestic product by the end of the year, Fitch warned. Mish's Global Economic Trend Analysis: Japanese Debt Downgraded by Fitch; No Urgency for Japan (Until Sudden Panic Hits). Did you catch that 240% number? And no one is worried? Riiiight.

Speaking of issues in Japan, you must bring up the unthinkable (which has proven to become thinkable). To those AFL long holders, you have been warned now about the debt and this issue for quite some time, "Chris Canine – who has 15 years experience as a health physics technician, chemist and radiation safety instructor – told Energy News that if number 4 reactor fuel pool at Fukushima collapses, Japan will be evacuated. Fukushima: If Number 4 Collapses, Japan Will Be Evacuated Alex Jones' Infowars. Think this can't happen? Think again, this is far worse than Chernobyl that has an evacuation zone that would, if in Japan, have all 40 million in the Tokyo area evacuated by now if the prevailing wind was not directly East all the time. (Just scratching the surface here - it really is worse than this)

SPX 60m - Is that blue wedge right? Down for E? I'm not sure about the possible divergences in the indicators since a lower low was not achieved, but oversold it is. The count would be for a move up here before further weakness. My upside max right now is near 1370 with a stop at my 1341 level being the first major resistance. 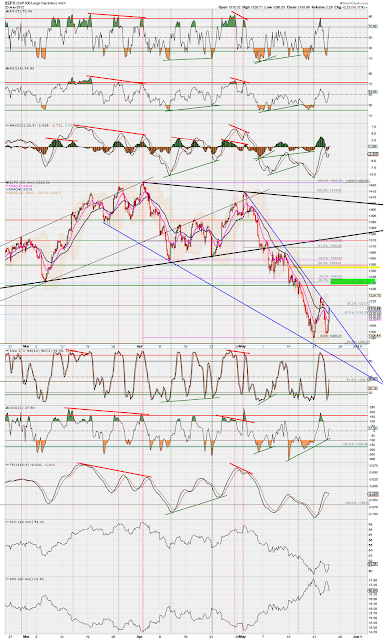