Shanky Does the AUD/JPY - Running Out Of Time

As usual we have to first look far back in time. There are many long term support diagonals and price points that are coming into play and then there are some longer term ones that are out there and need to be recognized for their potential.

Monthly - Long Term - We look way back to find examples of long term trends. For example this support resistance point near 71 runs clearly back to 1993. It appears to mark the low point or danger zone where price does not want to stay below for too long. the inverse of that is the 89 level. The happy medium place for price to travel in is between these two points. Notice the range since 2009. While this price movement appears to have been the most stable in years, we all know that this is because of market intervention and the control over natural price movements. Note the lower green support diagonal rests sub 55 at this time. 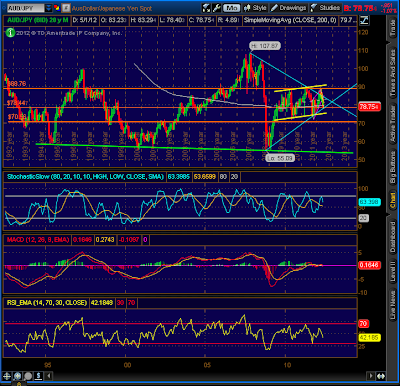 Monthly - Short Term - What appears to be a (in blue) wedge or triangle has formed off the 2007 highs and the 2008 lows. Price is consolidating in the end of that formation that ends in November of this year. Within that formation a possible channel (yellow) has formed inside the upper and lower support resistance points at 89 and 71 shown above. Price is now under the monthly 200ma. 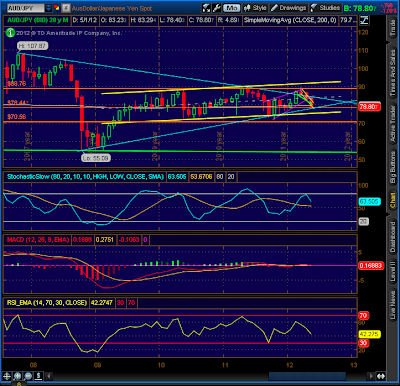 Weekly - A closer look at the end of the wedge/triangle and the channel. The internals look very weak here as price approaches blue support and meets 200wma support (which has been a great barometer since early 2009. A crack here and then of channel support near 75 will lead to the dreaded 71 support area and continue a nasty trend. 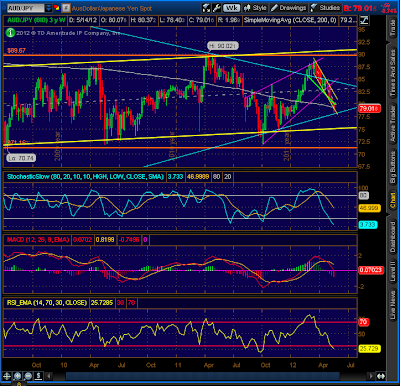 Daily - Oversold and approaching blue support while trading under the 200dma. The yellow channel or the green falling wedge both work as ending patterns into this support area. 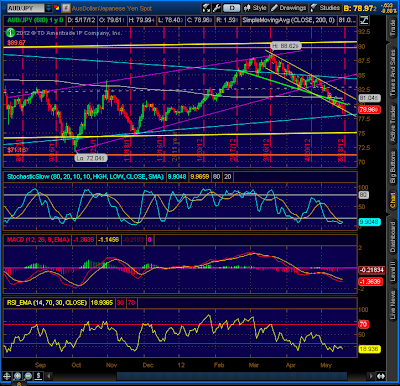 60m - Testing yellow channel support or under throwing the green wedge at blue long term support. Internals look like a near term blow off bottom. 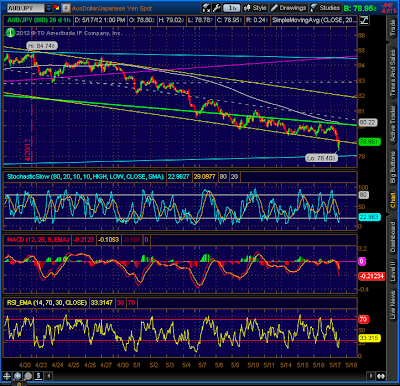 As shown in the morning post the EUR/USD pair is also at critical support as are several other major items in the technical world. This is quite the opposite of what we were seeing a couple of months ago when everything was signaling this breakdown. Things appear to be pointing to a really serious continuation of this move after what appears to be a coming last ditch effort or corrective to extend and pretend the reality possibly till the election. That may occur either here or as a backtest of these critical levels if they fail here. It all depends on the Fed. Their backs are to the wall right now. I would expect a bazooka to be fired sooner than later.

Comments and thoughts always welcomed below.