I figured it out - I'm bored. I'm bored to hell with the corruption and fraud and theft. I'm sick and tired of the heartless theft by the banks and dismissive conduct by the governments that are owned and controlled by said banks. I'm sick and tired of the entitled/lazy/irresponsible sheeple being so complacent and lacking the heart and fortitude to stand up against said banks and governments.

I'm sick and tired of the apathy (Apathy (also called impassivity or perfunctoriness) is a state of indifference, or the suppression of emotions such as concern, excitement, motivation and passion. An apathetic individual has an absence of interest in or concern about emotional, social, spiritual, philosophical and/or physical life. Apathy - Wikipedia) shown by the global populace while they are financially raped and politically subdued.

I'm just plain bored. It is like a really crappy 4 year long movie (actually longer, just this most recent episode is four years) that just goes on and on and on. Debt this, fraud that, no regulation, rampant corruption, expanding police state, the sheeple lose at every turn, and I'm sick and tired of it.

My bitching went into hibernation a few months back. I was almost physically ill back in March when I saw and warned what the charts were aligned to do. That realization is playing out. Starting with the Greek and French elections that turned the tides on the banks, the real possibility of the global financial meltdown is playing out. Yes, the end of that horrifically long movie may be finally playing out.

The question becomes is my boredom actually fear or some sort of avoidance mechanism kicking in? Is the fact that the worst nightmares that have been called here for years are finally awakening? Sure they were fun to talk and bitch about for years. It was fun having all the calls over the years by STB hit one by one. Sadly there is only one real call left to come to fruition, and that is of the STB "exogenous event" (which those words are just now coming into vogue with the MSM and other media types) and global default.

Reality sucks. Watching the movies is awesome where you can live in fantasy land and not be personally affected by the outcomes. Sadly this is not a movie and it is reality. Horrifically tens of millions can testify to that. My fears are real and yours should be to. All the talk over the years about guns, ammo, gold, silver, food , seeds and a vespa are coming to roost. I surely hope you realize the immensity and profound importance of the message I have been trying my best to bring you for over the past three years. Now is the time to prepare.

Minis 1m - There are an assload of charts on the blog this week and on my chartbook. Feel free to search the posts for what you need. The  minis got as low as 1293.5 last night before the FB rally. This completes the fall to my second target and the 38% retracement. It starts to get much more interesting the farther we fall below this standard retracement level. The far east got crushed and the EU is not fairing much better (when it is game over and the whole frigging world is in denial this happens). The powers that be are trying to save the FB play rallying the minis 17 points off the lows (for whatever reason). It is opex Friday. 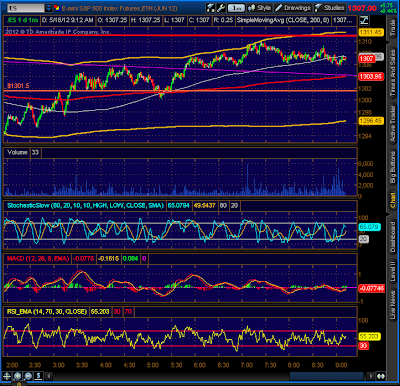 I'll post relevant charts in the commentary. Right now there is not much to look at will the FB print and we may have some fun with that today. Note the record low close on the 10 and 30yr yesterday. That kinda says it all.