May Day - for those that do not know about May Day I suggest you read May Day - Wikipedia, the free encyclopedia  "As Europe became Christianized the pagan holidays lost their religious character and either changed into popular secular celebrations, as with May Day, or were merged with or replaced by new Christian holidays as with Christmas, Easter, Pentecost and [[All Saint's Day][citation needed]]. In the twentieth century, many neopagans began reconstructing the old traditions and celebrating May Day as a pagan religious festival again."

So, we advanced from pagan celebrations to Christian ones. That is a bit symbolic of these times except we seem to be doing the reverse. Our government is truly corrupt and the police state is growing more each day stealing our freedoms one by one. We as sheeple appear to be less reverent than in the past now worshiping the golden idols of debt and credit.

We no longer primarily serve God. We serve ourselves in our quest for the easy life. Toil has been replaced by entitlement. It appears that the masses are more than willing to choose the easy route, entitlement, in exchange for loss of freedom.

Warning: what appears to be is not always what it is. It is a trap! All you have to do is look at Greece or Argentina to see where we are headed as a nation. Entitlement leads to an unproductive and lazy populace that solely relies on the state. The state must have taxes as revenue to keep the system running. As the economy dies, jobs are lost, tax revenues fail and the system begins to break down. We're in the mid-stages of this cycle.

More and more realize the free way is the easy way and the government, in exchange for votes to keep them in power, continues deficit spending to perpetuate the system. We can no longer afford this. I suggest you look at the U.S. National Debt Clock : Real Time. I ask you to look at one data point on the clock - the $118 TRILLION in unfunded liabilities. Care to explain to me how we're gonna pay this off to perpetuate the entitlement state? We can't.

The rapid advancement of the police state is a reaction to the fact that our government knows that massive social unrest is coming and coming sooner than later. When the entitlement state breaks and can no longer provide the 50" plasmas and Escalades to the needy this place is gonna go nuts.

On to the markets - As discussed and known by many the markets are a fabricated lump of crap. They are manipulated and controlled by the Fed, Treasury and Wall Street to give the illusion that the economy and your savings are stable. We are at the mercy of the Fed and their easing policies. that is all there is to the markets - nothing more. 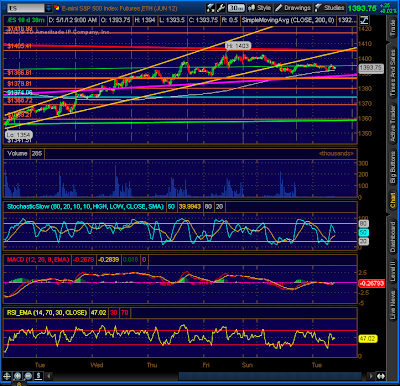 Minis 4hr - The head and shoulders I am still looking at. Are they in RS launching pad mode or is this thing about to truly break down? It appears they have averted the latest disaster, but they are not getting the ramp or desired effect they are used to at this point. Pink diagonal support off the November lows is everything at this point. 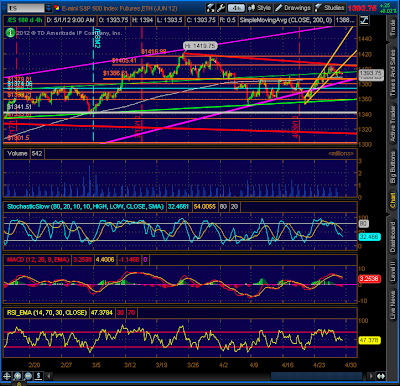 Gold - /YG - Gold is at a triple resistance area - blue channel, backtesting yellow LT support and the 1678 price level. It appears 'someone' is trying pretty hard to suppress the price of gold at this level. See Today's $1.24 Billion Targeted Gold Slam Down Makes The Mainstream Press | ZeroHedge 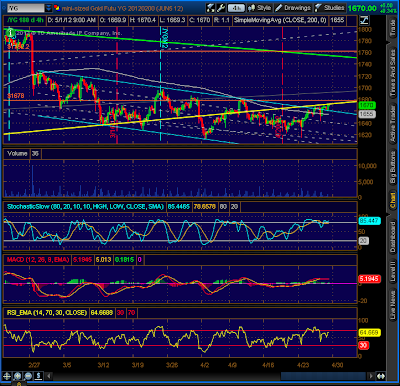 EUR/USD - This pair is at a critical point. Just like the HnS on the SPX and S&P Futures you can see it here except this pair is flirting with LT channel (yellow) resistance. This is a critical point. IMO they are staring $127 in the face. Add this point to the gold manipulation above and you can begin to see the desperation moves coming out. 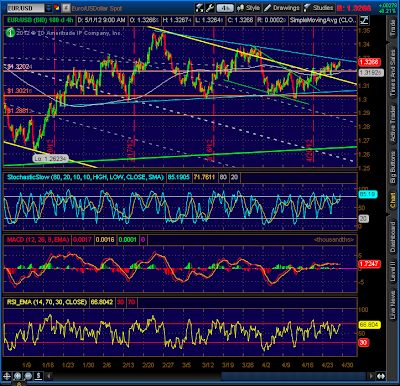 Oil - /CL - Channeling down (green) in line with upper (blue) long term resistance into and holding $103 support. Obviously there is all sorts of support and resistance at this point.  If they can get it sub $103 then it looks like $97 or lower green channel support will be in play. On the other hand if an 'event' of some sort happens then a backtest of yellow channel support near $112 may be in order. 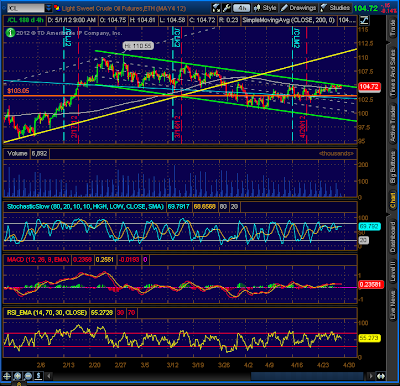 10yr - TNX - /ZN - This is a 10 year chart. Think this is sustainable? Just another chart indicating that we're possibly at a major turning point and an 'event' could be near. That is a completed wedge with an ending E touch of the upper resistance. 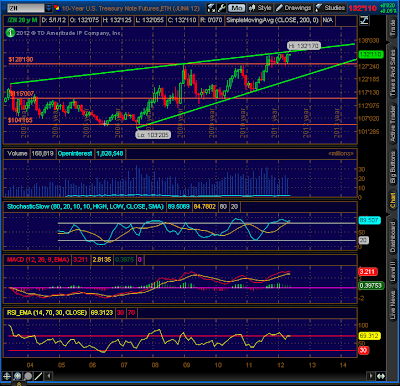 Patience, form, follow the Fed and wait for the catalyst.

Minis 15m - This chart has all your critical levels. 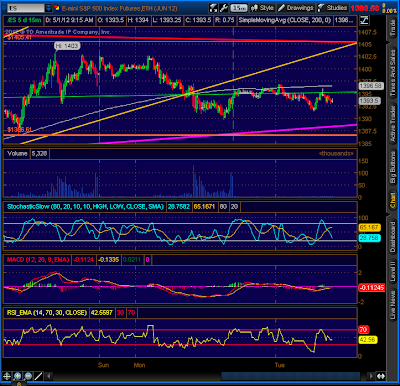