A couple of quick things and then off to the charts -

1) This is the big one - Some of you know we'll run out of money as early as August AGAIN and that our government will be surviving off it's pensioners for the third time in as many years. Now that's a great way to run a business isn't it. Of course, "Treasury Secretary Timothy Geithner, speaking today at the Peterson conference, said lawmakers won’t need to raise the debt limit until early 2013. He said the executive branch has “tools” that can push back the deadline for raising the debt limit."

You need to read  Boehner Demands Spending Cuts for Any Debt Limit Increase - Bloomberg, because it has a nice template for the massive political battles that are set to rage in the coming months.  You may also want to see Boehner lays down markers on year-end 'fiscal cliff'.

2) Back in March I penned Your Retirement Funds Will Be Confiscated Eventually. It was kinda popular post. STB's favorite subject is the pension system and how the markets are a farce to hide its glaring failure from the public. Of course that combined with SS and MC and all the other debts of this once great nation (don't believe me - check out the U.S. National Debt Clock : Real Time) are the real problem that no one likes to discuss. I suggest you keep your heads up for any info surrounding the pension/retirement plan issues.

3) The EU is in deep shit and Cali has some serious issues.

On to the charts - A truly massive event as the charts and STB were warning about  over the past couple of months may be in order. My 'event' has either happened or could be coming soon. We're in serious duck and cover mode. Of course I sit waiting for the fed to make their next move to stick save the system one more time. Can they do it is the question?

First the whacky action in the minis today - If you go thru the comments you notice I had no clue as to how or why they held the 1333 to 1341 area most of the day (till they didn't). 1312 then 1300 are your next support points. There are some massive 'hole' in this market that were left by the wild and unbridled run/ramp up. Those come back to haunt you on the way down as well. 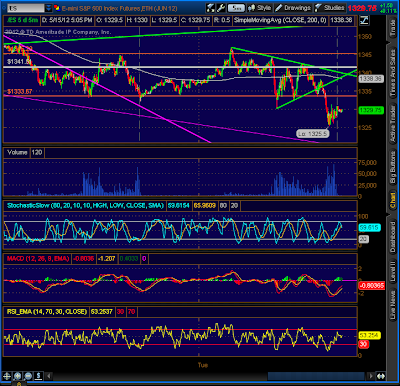 The dollar busted all sorts of resistance points today in an incredible show strength for the fiat that it is. It took out $81 resistance and green channel resistance that had kept price contained on the upside for about a month. Blue channel resistance (not pictured) near $82 should be the next stop. For more detail see yesterday's post Shanky Does the Dollar. 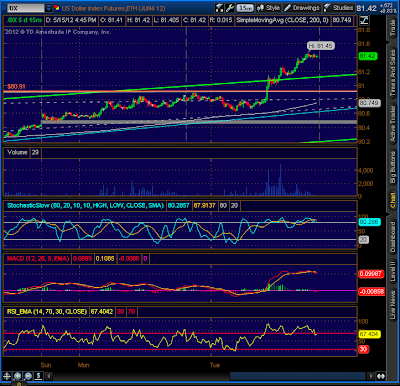 TNX is at its limit (or at least should be) touching upper wedge resistance going back to 2003 and completing the E touch of the multi-year rising wedge. 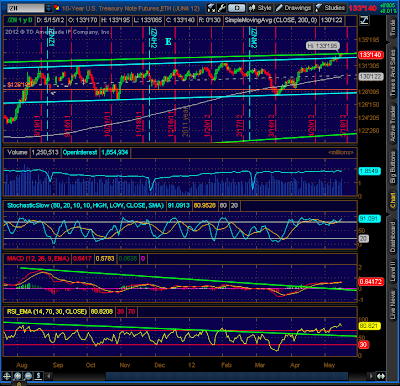 The EUR/USD just got crushed and finished within a point of support off the 2002 low. For more detail see yesterday's post Shanky Does the EUR/USD. 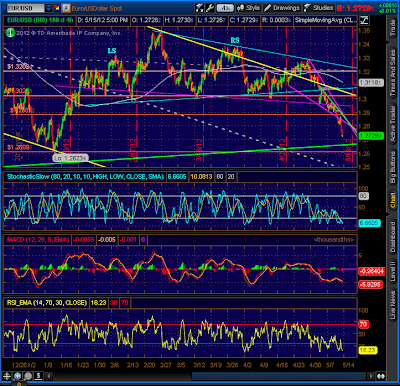 Markets are sending mixed signals right now. When that happens you stay with the trend and don't try and force anything.

Daily SPX - what were divergences are no longer as the markets power the internal weakness to new lows except for the MACD hist and the NYMO. SPXA50 is at a turn point and RSI14 and S STO are beginning to embed. Oversold, but not exceptionally yet. This chart looks weak. Note the level of TNX vs. SPX - not good. 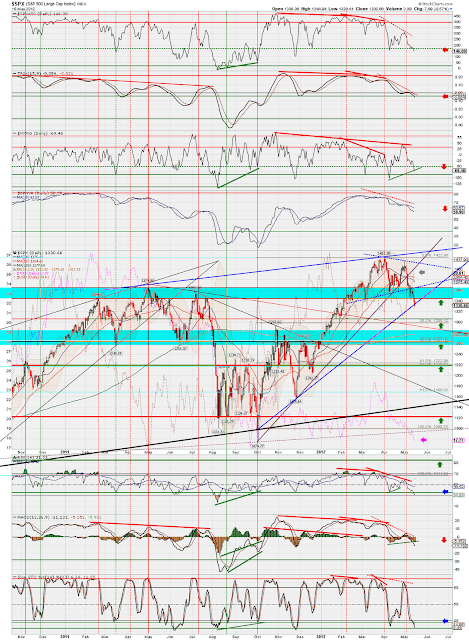 SPX 60m - The bust of 1341 today may have sealed the deal for the neckline bounce at 1341 and confirmed the HnS breakdown shown here. The 60m chart earlier had divergences all over the place. Those got blown thru for the most part (similar to the daily), but some still exist. The Fed needs to make a stand here (I think they tried and failed) or 1300 to 1295 are in the cards. 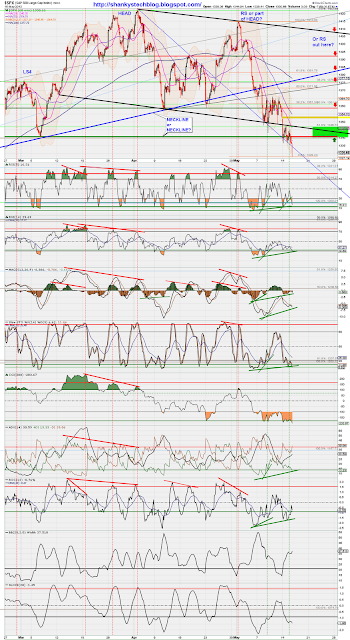 On the bullish side - My BTFD chart went into the buy zone. This chart's accuracy has been pretty amazing. What this chart tells me is that some sort of pop could be in the making and that you need to be aware of that possibility. 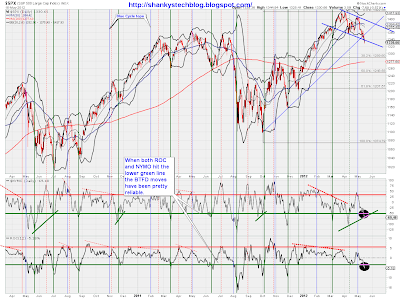 And on the bearish side - My Bullish Percent chart is just getting started. Sentiment has not even begun to wane. 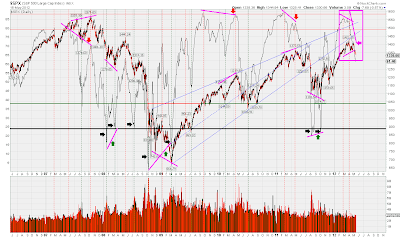 More in the morning.