Running a bit late this morning, sorry. I had a hectic weekend and I'm not quite as prepared as I'd like to be. Maybe that does not matter as apparently the world leaders are not either. Speculation is the best word that describes the global situation to me right now. How much easing and when and will it have any beneficial effects other than kicking the can one more time to extend and pretend that all is well when it is not. So, in other words, nothing is new. Did you expect any different? If you did or if you thought some sort of magic bazooka is coming to save the day, don't.

A few months back STB was pointing to how nasty the charts looked. They still look nasty on the weekly and monthly charts, but the daily that I'm showing below is starting to get pretty oversold. Simply being oversold does not mean a turn is coming or has to come, but it does mean that you should be aware of that potential.

Daily SPX - You must remember that I am applying TA to a market that is dominated by the Fed and its easing policies, so historical norms can not be applied.

Top to bottom - The SPXA50 is at 89 - anything sub 100 is pretty extreme. TRIX is dipping into levels that sparked previous rally points. The NYMO has entered a buy zone and my BTFD chart did signal a buy possibility last week. BPNYA (bullish percent) is falling like a rock but not near a long term reversal point yet. Price is backtesting the busted resistance diagonal at the 38% retracement - a point the bulls would like to make a stand at. The dollar exploded and TNX imploded. RSI has gone sub 30 which is incredibly weak and does not like to be down there long. MACD is incredibly dangerous right now with the histogram setting a lower low. S Sto is what it is. Note the divergences that were present last week no loner exist. 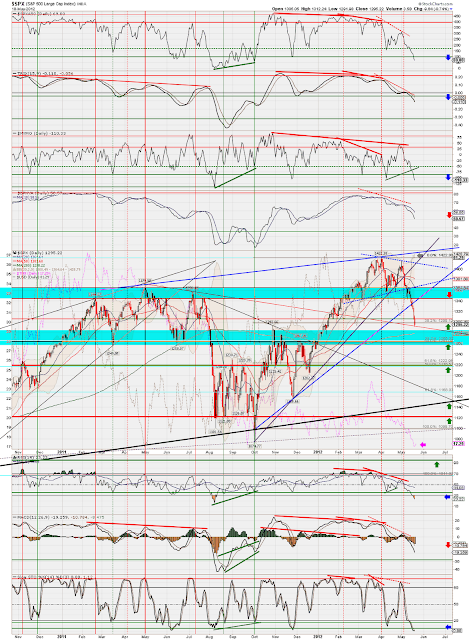 Wait and see mode as usual. The QE and LTRO rumors last week did little more than cause price to pause. I believe that more governments around the globe are beginning to realize that the crisis can not be contained and sentiment is beginning to wane from supporting the banks to saving their countries. The is a huge and painful process, but maybe, just maybe the governments are starting to wake up and are tired of being pushed around. LMAO - that was a happy thought - Funny HAHA - like that's gonna happen. Greed always rules, till it doesn't.

As usual I'll give updated charts in the commentary and on twitter throughout the day. Have a great week.

Thanks for the comments in the weekend post. Sorry I did not get to participate. I was really bogged down all weekend. I intend on following up on those soon.