OK, so is this a candidate for what I have been so concerned about and what the charts have been pointing to over the past few weeks?

"When we last discussed what now appears certain to be a TBAC announcement tomorrow that Floating Rate Treasurys are about to be launched by the US during the Treasury, we cautioned, using an analysis by the IMF's Singh, that "the US Treasury may be telegraphing to the world that it, or far more importantly, the TBAC, is quietly preparing for a surge in interest rates." We then continued that "What is also obvious is that if the TBAC is quietly shifting the market into preparation mode for "a steady (or rocky) rise in rates from near zero to a "neutral" fed funds rate of 400 bps and a "normal" 5 percent yield on 2 year U.S. Treasuries" as the IMF warns, then all hell is about to break loose in stocks, as by now everyone is aware that without the Fed liquidity, and not just liquidity, but "flow" or constant injection of liquidity, as opposed to merely "stock", VIX will explode, equities will implode, and all hell would break loose."

OK, so is the Fed going to implement a massive policy shift that will cause a severe disruption in the markets during an election year and before the "fiscal cliff" January 01? "Charles Evans of the Chicago Fed called the cliff a "big uncertainty" while Atlanta Fed President Dennis Lockhart said there could be a "financial shock" if markets begin to anticipate that Congress and the White House do little to address this situation.

The expected tax increases and spending cuts were triggered when a congressional "super committee" failed to come up with a way of closing the federal budget deficit." Milken Institute - US Business News  — US Faces Risk of 'Fiscal Cliff': Fed Officials - CNBC

Hey bartender, I'll take a double shot of that doom and gloom. Oh, and if Obummer gets reelected - fhugeddaboutit.

Speaking of cliffs, price is at one right now. See the morning post for all the detailed charts.

Minis 5m - Pink is it. The final support line. Red is resistance. the range for them to play in is narrowing every day. The Fed better come up with some good rumors soon or else. 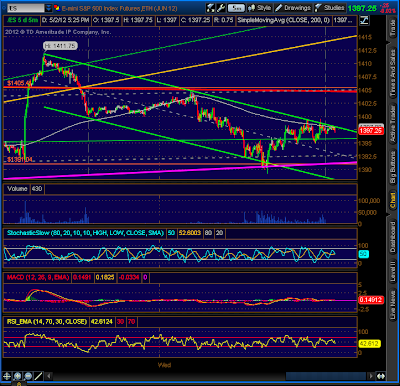 I almost forgot - please watch this - it will blow your mind - Theo Spark: Video: If I Were the Devil - by PAUL HARVEY  When you listen to it, remember the commentary was broadcast 47 years ago....April 3, 1965.