A little review and history - Late last summer STB was off on the tangent that the Fed and the government would manufacture a crash in order to make a move to QE3 and to get the Super Committee budget approval passed without any qualms from the markets or the sheeple. Well, the super committee wound up being nothing more than a crock of shit, the markets crashed post QE2 (as they always do when life supporting liquidity is pulled) and the stealth QE via Twist and the promise of LTRO2 came into being.

I called the crashes in June and November. It was not that hard to do when TA and the end of a QE session line up perfectly. Well here we are again. Twist ending in June, the government is out of money again and the charts back in March gave us this turn pretty much on a platter screaming top. This brings us back to another overriding question/thought STB has been posing for well over a year now and for that I bring the weekly target chart out of the closet (It has not been updated in over a year).

My two theories (as drawn on the chart) were we'd either crash then (needed my 'exogenous event') or they would stick save into the election with more easing and then crash. Option B was the right choice. I did not think they could drive a higher high, but I underestimated the Fed and its power. I thought then as I do now that QE's returns will be diminished at these levels and significant upside should be out of the question. I did not think the upper black resistance diagonal would be violated. Fortunately STB preached patience, form and follow the Fed from January 01 and we made it to the top without much damage. Now we read a common and more reoccurring theme (I was just a year early), ""The end is of course ECB printing, Eurobonds and every developed market central bank dumping massive liquidity into the global financial markets as systemic risks rise - QE, LTROs, Currency swaps, and every funding facility under the sun come into play. The path to this end game will be bumpy, but make no mistake, the developed market central banks will dump so much fiat on the system to cover the losses, that risk free real rates will plummet to levels so negative that anyone left holding cash or cash equivalents will see massive destruction of real wealth. We may have to push risk assets a bit lower from here, but the global central banks will be firing howitzers and tomahawks very shortly, not bazookas! And you best be owning some risk when those bad boys are launched!!"" Forget The "Bazookas": Here Come The "Tomahawks" And "Howitzers" - An R-Rated Walk Thru The Greek Endgame | ZeroHedge

In other words they should set up another massive short squeeze and you better be long and strong cause you don't tug on superman's cape and you don't spit into the wind. Of course this is not guaranteed. Here is the problem for prognosticators like me. I am stuck between the endless easing and exogenous event hard place.

For those that do not know one of STB's longest and one of the few final predictions left to come to pass is that it would take an 'external (or exogenous as RC has changed the verbiage) event' to rip control of the markets from the Fed. Also note that the term 'exogenous event' is now becoming more popular in the media.

So, we wait. I think it is pretty clear as STB has pointed out over the years that the math does not work and no matter how much money they throw at the problem they can not solve the underlying issue of massive debt by issuing more debt. Greece will implode, Spain and the rest of the PIIGS will follow and the quadrillion derivatives market will #fail and the financial system as we know it will cease to exist. All wealth will be lost and the aftermath is anyone's guess. One thing is for sure, it will not be pretty. The timing is the only issue. Till them all you can do is follow and bet with the Fed. Eliminate all rational thoughts from your head and think corruption and market manipulation.

Minis 4hr - 1341 and he green diagonals are your main resistance points. At this time I'm leaning towards a bit more upside. Having made it thru 1341 and to my second target and the 38% retracement this is a logical spot for some sort of bounce. 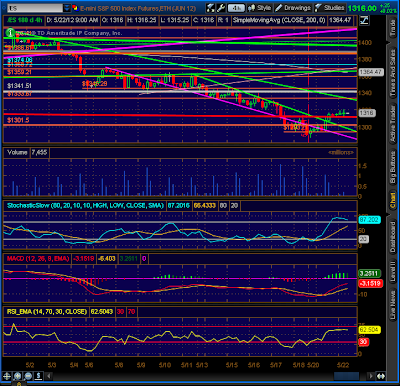