Good evening. Nice to be back penning another AD. I enjoyed my break and am ready to bring you all the delightful news you are used to getting in the evening (but have not in a while). I had to take some time off from the AD's cause I just could not bring myself to write them.

You see, things really suck right now. Much more than normal suck. Things are imploding and the French and Greece elections may have been the exogenous events that I have been calling for since I began blogging. Yes, those events that topple the dominoes that rip the markets from the control of the Fed and bring everything crashing down the way it deserves.

If you don't believe me, the I want you to hear the truth from the statesman Nigel Farage: "The EU Titanic Has Now Hit The Iceberg" | ZeroHedge. "Farage pulls no punches but in three minutes provides a clear picture of just how concerned anyone who is not merely a head-in-the-sand status-quo muddle-through'er should be with regards Europe: "It is a European union of economic failure, of mass unemployment, and of low growth"" Please watch the video and let it sink in what he is telling you.

What you need to know is that Greece (the preferred bailout vehicle of central banks across the globe) may no longer function at the conduit of first and best resort. I've been telling you this same thing for over a year, "And so the check bounces, which is ironic, because as we repeatedly explained, the Greek bailout is not about Greece: it is merely to allow Europe to bailout its banks via ECB and Troika funded interest payments and using Greece as a passthru vehicle. Luckily, that particularly aggravating farce may soon be ending." Things In Europe Just Getting Worse By The Minute | ZeroHedge. This is a massive problem for the central banks as they will have to find new avenues to funnel under the table (US Taxpayer) funds to the world's insolvent banks.

To add insult to injury today "The only thing funnier than a nationalization statement spun as positive, or favorable for taxpayers, is one that has been Google translated, in this case from Spanish, courtesy of Bank of Spain, which has just formally bailed out Bankia, leaving the best for last: "In any case, BFA-Bankia is a solvent entity that continues to function quite normally and customers and depositors should have no concern." Move along. Nothing to see here. Nobody should be concerned. Bank Of Spain Formally Nationalizes Bankia, Says Insolvent Bank Is "Solvent", Adds There Is No Cause For Concern | ZeroHedge Funny, that same video used to be on the blog here.

Folks the EU is about to implode and they can not keep the charade all is well going much longer. The culmination will most likely be when/if Greece defaults on their international (not domestic) bonds due next month. The timing of this with the end of twist and coming budget shortfalls here will make for some particularly nasty moments.

Obummer spikes the gay football. Looking for a little distraction I'm guessing. Nothing like a discussion about gay marriage (I know it is important) during the greatest financial crisis in the history of the globe. The walls are burning and falling down all around us and this is what he bring up, now? Really? The man obviously needs as many distractions from reality as possible.

Why does he need to change the subject and get to to look at the right hand and not what's happening in the left? Maybe this is why Texas INMATE gets 40 per cent of votes against Obama in West Virginia primary | Mail Online. How unpopular can Obama get? Texas INMATE gets 40 per cent of votes against President in West Virginia primary. Yes you heard that right. Dude, attracting 15% of vote normally qualifies candidate for a delegate to the Democratic National Convention. LMAO and this is who the dems are running and who apparently a whole bunch of Americans are willing to vote for as their leader.

STB had a near flawless day on the blog calling the minis. Price finally made it all the way to my 1341 target and reversed nicely off that point.

Here is the wedge and the channel breakdown. Resistance at 1360 held (to my delight), the wedge busted and down for a backtest of busted ST green diagonal. Looks like a possible ABC set up with the blue wedge as A, yellow channel as B and then up for C.

A larger rising wedge would form if this is the case and 1368 or 1374 would be the likely targets. I'd really hate to see 1360 busted again. 1368 is the most likely point as it is the 38% retrace off the 1411 top. There is another resistance diagonal above (not pictured) that runs near 1375 (and falling) at this point. 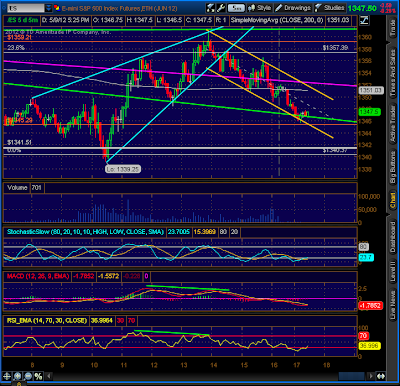 Who knows what the overnight session will have in store. 6 consecutive down days in the DOW is not good and the dailys are even showing pos divergences at this point. Can they embed with Twist still on or do the bulls make one last run and a small short squeeze bull trap comes before further disaster? You know I prefer the further disaster call, but you never know what the Fed has in store. It is their market.