Is it time to duck and cover? We'll see with the NFP in the morning. To be truthful it all depends on what the Fed wants. How will the markets react to a disappointing number? Will they rejoice because it brings near surety of additional levitating QE? Will they fall apart as the charts have been indicating they will? If so, how far will the Fed let it slide?

Major support was basically decimated today, but the first support under the support diagonal buts has held. As I asked today, under what level do the sell orders sit?

Minis 5m - Here is the wedge I was talking about today. Pink was major support. 1386 that is holding now is first support. 1374 is next. 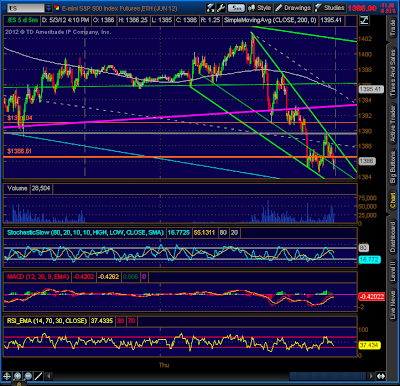 Minis 60m - The head and shoulders I have been showing for some time now. Target is near 1370. 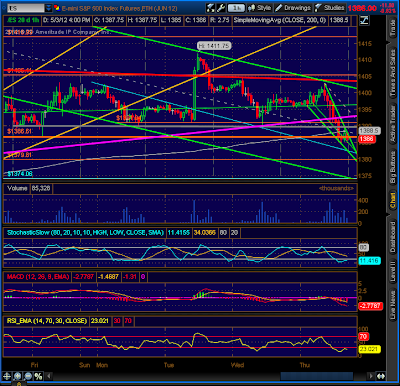 Minis 4hr - The larger head and shoulders I have been discussing for over a month now. Neckline support is near 1360. See heavy green neckline. 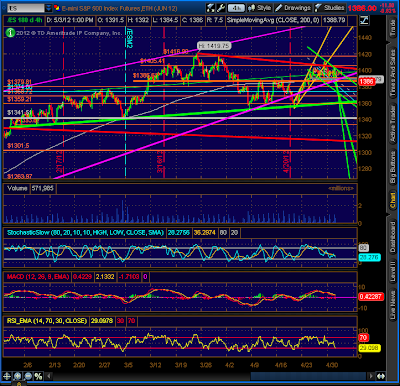 In other news today that you should know about -

If you have not seen the video in this post please watch it before the NFP release in the morning. "The simple truth, as Charles notes, is that even the BLS doesn't believe its own hype (in its footnotes) and while mainstream media and talking heads will quote the unemployment rate or NFP change as if it was transcribed by the hand of God, it is in fact an extremely ill-formed, very narrow survey with such huge statistical noise as to be entirely useless." Why You Shouldn't Trust Tomorrow's BLS Number | ZeroHedge

"Volatility On Demand": Catching A 54 Second Grand Rehearsal For A Market Crash In The Act | ZeroHedge  "the market forensics at Nanex have now uncovered something even more disturbing. As a reminder, some time ago, Nanex discovered that there is a direct and simple way for HFT-based operators to create latency on demand: the very same phenomenon that facilitated the flash crash once it had started, and prevented normal price discovery. Now it is time to add Volatility on demand: a precondition that may well be critical to setting up the next May 6-like market wide flash crash. Because according to the following analysis, yesterday at market close Nanex may have observed a grand dress rehearsal for the next programmed market wide crash."

And the biggest news of the day (other than Russia threatens to strike NATO missile defense sites - Washington Times) is this MUST read post - "A leaked U.S. Army document prepared for the Department of Defense contains shocking plans for “political activists” to be pacified by “PSYOP officers” into developing an “appreciation of U.S. policies” while detained in prison camps inside the United States. Leaked U.S. Army Document Outlines Plan For Re-Education Camps In America Alex Jones' Infowars.

The police state is coming folks. I keep trying to tell you this. they are planning for massive financial collapse and a t the same time a post crash society.