And the jobs report says - worse, and not surprisingly CNBS is struggling to find a positive angle on the subject. Why not report it as it is - BAD! It is friggin BAD. Just say it. This spin BS from Liesman and the others has to stop.The CITI deal sucked. That is a BIG RED FLAG. 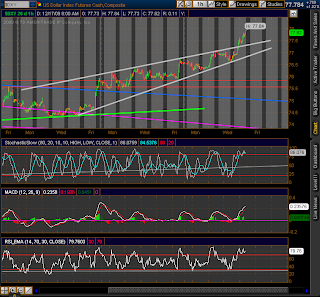 The dollar spiked nicely last night as the breakout continues. There is a big gap that will be closed at 78.02 on the daily chart from 09/04. there is now firm support at the 75.80 range. 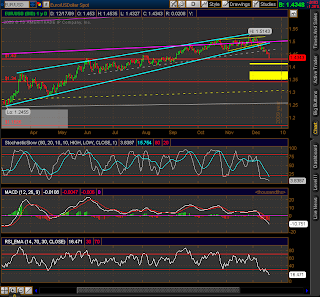 The EUR/USD continues its plunge as expected. It has fallen to the $1.43 support level and may take a breather here. If not the 38% retracement is $1.41. 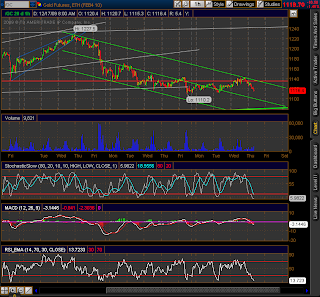 Gold's brief recovery may be over for now as it has net the upper channel line and has reversed. The $1088 level support might hold and if not the 38% retracement at $1066 would be the next most logical spot. 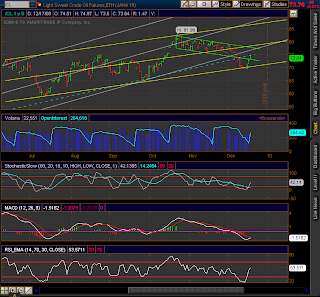 Oil's recovery (as advertised here) appers to have hit a ST ceiling after a nice run. There is a channel down (not shown here) forming over the last week or so. My question, is this a backtest of the larger gray channel and more downside is to come or is this just the start of something better as the daily indicators say. 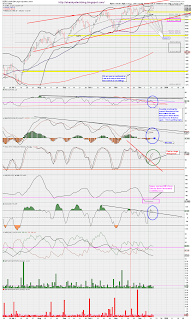 The other day I quietly and politely made a e-mini 1096 call. So far they are pausing at 1095.75. Can it get worse? Well, going against some of the grain and counts, I have been decidedly bearish (since the boom, boom, boom chart I posted on Sunday). So we get a little boom action this am. I'm not saying this is something major. I posted the daily chart so you can see pretty clearly all the action. Mainly notice all the support at the 185 level. As for a count? This may be a 1 of a 3 down. I am not willing to go for anything under 1085 quite yet. If we take out 1085 I will be one short sum beech. There is not much to stop it under that. You go straight to 1064 and then to 1030. I expect the PPT to put up a good fight (unless they used all their funds buying up CITI and Wells offerings - DOPE!)

Natgas is topping I think - It is at resistance at least and struggling to get any higher. The turbo boost it got this week from the XOM deal may need to be corrected some.

GL out there and happy holidays.
Posted by Shanky at 9:00 AM