The financial index. What some of you that are looking for a top might not realize is that one of the leading sectors might just have topped back in October. 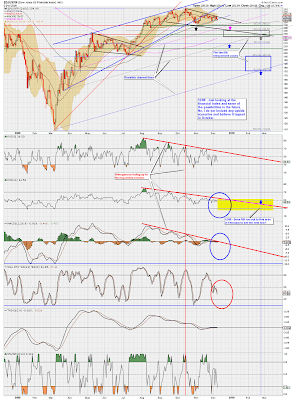 There are many ways to look at this chart, but up is one I am not even considering. Thanks to MW on CNBS this am. Since I hate posting the CNBC vids, I'll summarize her statements this morning "Not good".

OK, so we saw the divergences coming and RSI crossing the TL and the top was set (red vertical). If you are a FAZ owner you'd never really know the top was is would you? Well, FAZ did "bottom" on October 15th. So, what happens now?

In Shanky's world we like to draw pretend lines and do pretend things (that will not be discussed here). What is amazing is how these pretend things tend to work out (no wonder I liked Calculus so much). Some are calling the move up a 1,2 1,2 and some an ABC. I don't care what it was I just care where it is going and for that there are multiple options. I have drawn 3 dashed parallel lines to make three possible channel scenarios. I have not begun a "count". Right or wrong (as far as the channel assumption goes) I will always assume a channel will form first during any corrective. Why? It makes the most sense. Stocks like to channel. What can I say.

The PINK option. The worst option for the bears and the best for the bulls, but the least probable IMO. We'll know the answer to this one sooner than the others (duh?). See the pink arrow at the intersection of the 38% fib, near support and where the potential dashed pink lower channel line intersect? That's the first possible spot that screams at me.So we'll call 245 target 1.

The GRAY option. This one is pretty good for a bear but not a perma bear. I actually like this one a lot. In late February I have a dashed vertical blue line. This line intersects both retracement zones (51 to 62%) and the potential channel lines. So, the gray option makes for a NT bottom in late February near 236. I like this one a lot because of the position of the 200ma (currently 233).

(IF that is a descending triangle forming now AND it breaks down, it measures near perfectly to the 214 38% blue fib - No, I do not see a H&S - if I did it would measure the same. Just thought I would throw that in there.)

The BLUE option. This is best case scenario for the perma bears AT THIS TIME (that is not saying I can't see worse). Late February at the 176 level. I really like this cause of the trend in RSI and where the upper RSI TL plays out in relation to it bottoming (yellow box). This gives us a long slow death. there is good support in the 175 to 195 level as well.

Can it get beyond the blue target? Sure it can, but I am not going there till we see the form of the fall. the targets are all hypothetical as far as time goes, but as for price I like them all. IMO the sector is hanging from a cliff by one hand and someone is slowly lifting one finger at a time from the death grip it has on the ledge. If it does channel, good for me. If not those are still some valid TL's that may come into play so keep an eye out for them.

Want to learn more about Climategate and what's happening in Copenhagen regarding your future RIGHT NOW? Please see this - http://scienceandpublicpolicy.org/ I will be blogging on it this week. Tremendously important IMO.

GL out there and happy holidays.
Posted by Shanky at 4:59 PM