Gold is getting pummeled and the dollar has broken out and the minis are flat for the most part. The MOST IMPORTANT thing this week is the climate summit in Copenhagen. If you have not read or heard of Climategate, please read up on it and learn about the fraud that Al Gore and the climate alarmists are trying to push on you. This could be the most important meeting regarding our future on how we are taxed, governed and controlled by the UN or whatever global consulate they decide to submit to. I'm not kidding.Look, I'm all about protecting the planet and recycling, but not at the expense of fraud and manipulation all in the name of power and greed. 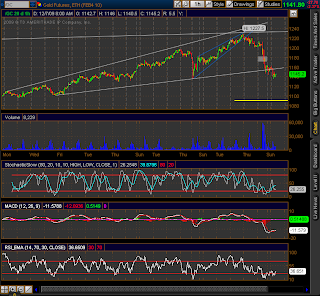 Gold /GC gold futures 60m - Well it paused at the lower tendline for a while, but it could not hold it. I'll have to do a more detailed post on gold later as a picture does not tell the whole story. The many issues surrounding this trade need to be brought into discussion. Bottom line is that I believe a floor has been set around 1100 and that is near the .38 fib retracement (yellow line) and support. 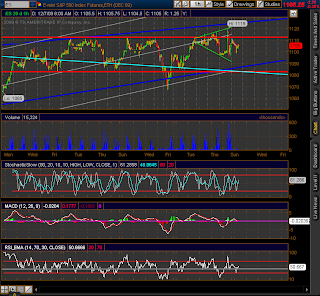 /ES 60m - Same old boring chart. Nothing to see here - move along. Pretty much range bound (two red lines) outside the top of the bear market top trendline (light blue) riding inside the P2 bull market rising wedge (dark blue). So, 1090 to 1080 is great support now and until that gives way, you can keep your shorts in your back pocket. 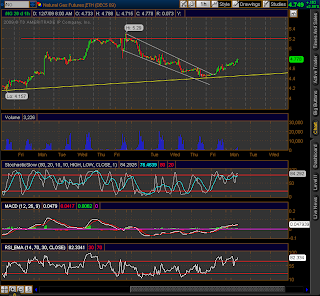 /NG 60m - Trendline support off of the 2.41 low (this is /ng not UNG) is holding nocely and it appears to have broken out of the gray diagonal. Indicators are mixed and the stoppage at the trendline was a surprise to me. That resistance line at 5.20 has been the ceiling going back to the beginning of '09. If that gives way there could be a significant jump, but until it does, don't get too excited. 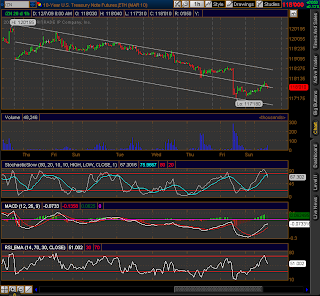 10yr Treasury /ZN 60m - Channeling down with a crippling blow on Friday morning. It has tried to recover some since then, but the trend is down and should remain that way. The 120 level was a good resistance point to get rejected at. 116 should be good support.With the talks of impending rate hikes, this puppy may get busy. 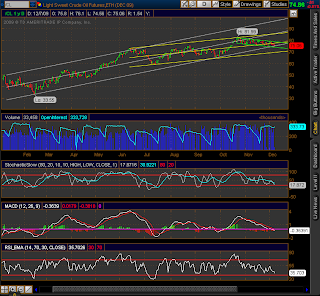 Oil /CL oil futures daily - I had to back it out so you can see the larger form and channel. Trading in the green channel now and at the lower TL of the gray channel. Now is the time we find out if that yellow channel means anything. The indicators could fall some more. With the dollar apparently heading up, the yellow channel may be it as oil continues to roll over (that is what I think it is doing). 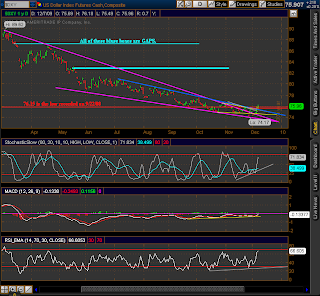 /DXY daily - Backing it out again so you can see the breakout. Taking out 76.15 was a big deal as that should have been some solid LT resistance. So, it is out of the pink dominant wedge and any corresponding resistance lines with the indicators headed north. A more detailed post is coming on the dollar and what's happening with it.Art mentioned a treldline breakout this AM of the dollar on CNBS - I believe it has already broken out as you can see.

The moves in most of these indicators are significant and a Morning Post will not do them justice. things are moving and fast now (all except for the major indexes which should follow soon. I'll be doing more detailed posts on all of the above today and the rest of the week. The markets are setting up for next year and the trends may be changing.

GL and happy holidays.
Posted by Shanky at 9:06 AM