"According to tradition, Patrick returned to Ireland to convert the pagan Irish to Christianity. The Declaration says that he spent many years envangelizing in the northern half of Ireland and converted "thousands". Tradition holds that he died on 17 March and was buried at Downpatrick. Over the following centuries, many legends grew up around Patrick and he became Ireland's foremost saint."

Sadly we could really use a St. Patrick today. I don't think that a night of twerking, drinking and all the other stuff that goes on on the night of his honor is exactly what we're supposed to be doing. Kinda sums things up a bit doesn't it? In the modern times of the self righteous me first society, what else would you expect? Indulge bitchez! I have one thing to say about this, we're all bout to either find God or wish he was here sooner than later with where we're headed globally.

FOMC week, back to Taper ON/OFF discussions. I still, and always will, contend that Taper/QE is the only true market force left until my "event" happens. Nothing matters other than Fed action. As long at the "put" or backstop is in place nothing bad can or will happen. All it takes is the existence of the slightest possibility that they will Taper Off to exist and the markets will remain in their over exuberant state.

With the Ukraine issue going down all sorts of uncertainty has sprung. Be certain that the government will act on this and use it to their advantage at least locally. Expansion of the police state is paramount for this administration. Destruction of the Constitution is agenda number one. Watch closely as evil incarnate potus uses his pen and unlawful executive orders to further empower the state over the sheeple. Also be on the lookout for more domestic false flags, they need an excuse to step in even deeper into the confrontation with Russia.

Minis 60m - Upper end of the pink rising wedge breaks down. About the only question I have is was that brief backtest at 1874 at the upper rising red wedge of death resistance THE backtest? If so, I missed the top and it's game over I'm afraid. The overnight gap from Friday is still open at this time. Blue LT resistance lies below at 1816. Support above that is at 1839, 32 and 23. As for resistance, the gap closes at 1847.5. Price is currently at my 1844 resistance line. Above is 1853. Above 1853.....1865 to 73 are several resistance diagonals. 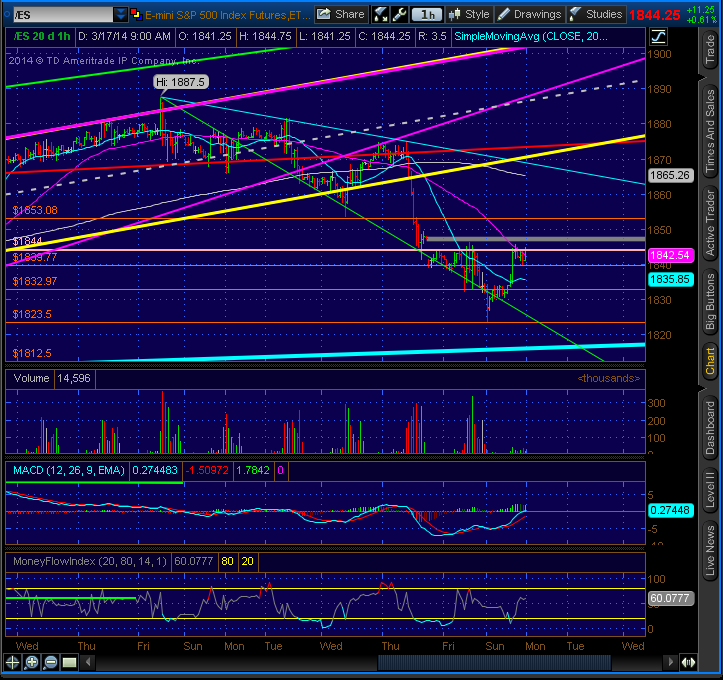 I would go into a lot more, but I covered a bunch Friday and with the Ukraine hot and heavy and the FOMC this week, I'm afraid that any serious analysis would be a waste of time. We can react if something happens, but trying to guess ahead of the Fed has proven fruitless. Follow the Fed, don't try and front run them. Been saying that for years now.

I will be doing the annual STB NCAA Tournament. I will see if I can get a group on Yahoo this year so we can all have a shot at getting WEB's billion for a perfect bracket.