Do you know how tough it is to have a discussion with your 11 year old on why we can't impeach potus? LS2 is a pretty bright kid. We covered the ME for his geography class this week. Israel all the way over to Iran and everything inbetween. Of course dad added a bit not in his textbook, but not too much that would influence his opinion. Just a few facts. Note: I skipped everything that had to do with any sort of conspiracy fact especially surrounding Zionism and 9/11.

His textbook (private school) did a fair job mentioning Israel, Muslims, Islam, Hamas, Hezbollah,  Palestine and such. It covered the oil trade and the Straight of Hormuz. After discussing Iraq and Afghanistan (I left out the poppy trade all together) then we went deep into Iran. I got his full interest when I started how Israel and the free world do not want Iran to have a nuke. This was covered briefly at the end of the Iran section in his textbook. When I told him about Israelis going into Iran and killing thier nuclear scientists so they could not develop a bomb and Stuxnet I got this 11 year old boys full attention. Ah, the things not taught in schools.

So the discussion went on about good and bad Muslims, and how the bad ones are taught that all non-believers should be eliminated from the planet. Well, as a good Christian child he was a bit stunned at this. Then the questions this morning came about potus. Apparently he thought long and hard about this last night after he was put to bed.

Why can't we kick Obama out dad? Why does our foreign policy "suck"? His words not mine. Well son, we can't impeach potus for several reasons. STB thinking hard and fast on how to answer this with extreme delicacy. I have a 5 minute drive to school to answer this and not sound like a complete bigot. Bingo! He's half white. I got this. So we briefly discussed race issues, potus' use of the NSA, DHS, and IRS and intimidation tactics and why he can't be impeached.

Oh, we also got into the gun control issue. He loves to hunt and shoot. So, this is why we don't shoot as much for fun anymore dad? Well son, they just shut down the last lead smeltry in the US and the DHS has bought up all the bullets for domestic use. Silence from the passengers seat.

Then came the birther question as we pull into school. Full disclosure - he did NOT get this from me. I told him we'd cover that tonight. I can't wait for the discussion this evening. Hmmm, how to teach your child not to hate and think rationally about a once great country that's falling apart, that saddling his generation with trillions in debt and allowing an out of control potus to destroy the constitution?

Minis 4hr - A pretty good look at what's going on technically.Green and blue rising wedges break down as they end the rising red wedge of death. Price falls and breaks red wedge of death support but gets a massive stick save (volatility bull tral indicating topping process). A new purple rising wedge forms and price is in a yellow channel inside this purple ED that appears to be backtesting the first green rising wedge support just above the rising red wedge of death's resistance - all at ATH's. Now note the negative divergences in green below and the vertical yellow time lines that indicated prior reversal points. See anything familiar? 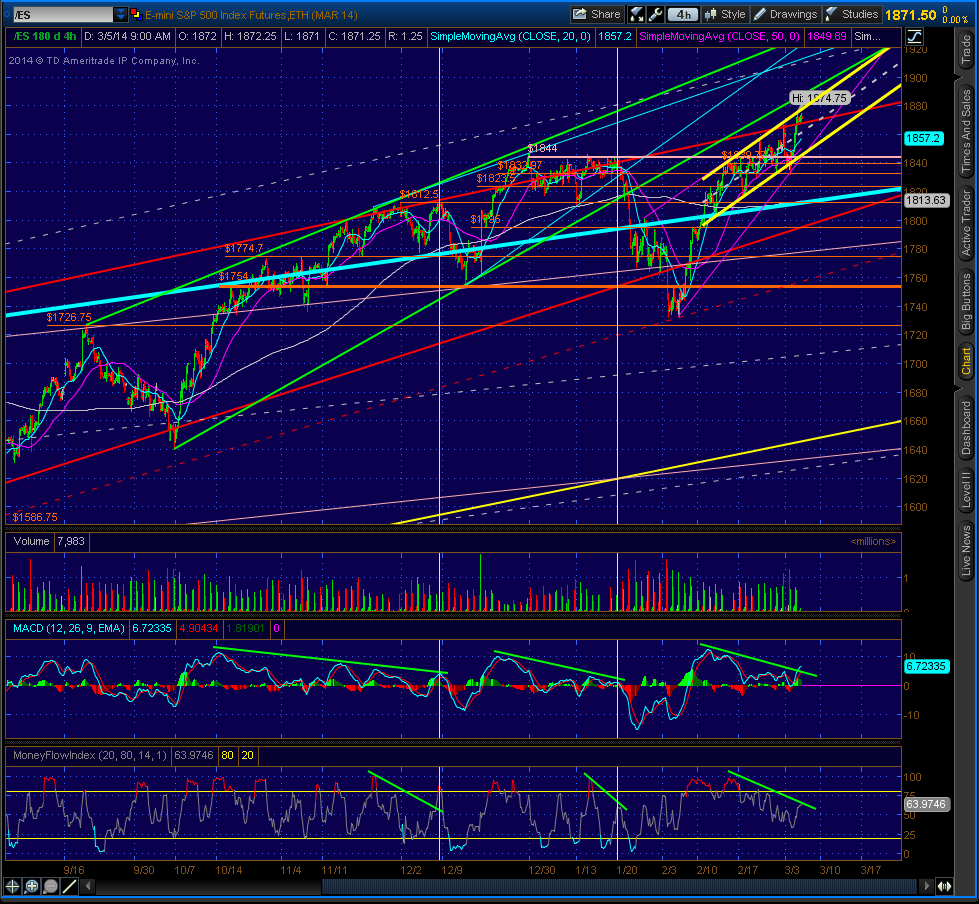 Have a good day. STB gave up soft drinks for Lent. That will hurt, but it's supposed to.