Fat Tuesday - I think I'm gonna give up BTFD and BTATH for Lent.

So, Putin backs off and the 5:00 am deadline for surrender was nothing but hot air. I'm sure that Obummer will note that his strength and resolve had everything to do with this backing down. He'll more than likely post some sort of selfie glorifying himself in the moment asking for more donations.

Of course Russia has won the war without a shot being fired, but the Ukraine situation is not over, just on the back burner now. I'm pretty sure the hypocrisy of our complaining about the invasion of a sovereign nation has the US in a fairly weak position to do anything about this situation. It's Bush's fault, again, I'm sure.

Israel is the next big deal where our administration will fail miserably.  Our Muslim-in-Chief is big on helping the Palestinians get their recognition. So big in fact he's just about willing to throw Israel under the bus. I'm not so sure Obummer wants to rile the AIPAC. Some believe the Zionists are the ones truly in control, the puppet-in-chief may not want to test that belief. Nor should a potus with a sub 40% approval rating want to rile a public that overwhelmingly supports Israel at this time more than ever. Maybe he should just stick with what he does best, destroying the Constitution and doing all sorts of unlawful acts? Then again, maybe not!

In the meantime O is gonna put his budget in place that's going to create millions of jobs and fix America's infrastructure problems. LOL. This administration could not fix a flat tire on Obummer's bike.

All this leads us back to taper on/off as the only meaningful market mover till the next crisis arises.

All is well! All is well! Never mind the near collapse yesterday and everyone lining up at the gates to leave the markets in record time. That was a false alarm. Nothing happened, so pay no attention to the the real fear that exists under this market. It did not happen, so you don't have to worry about it. You need to completely ignore the fact that we're one stray bullet from a 1,000 point down DOW day and more. These are not the droids you are looking for. All is well, now go donate to the democraptic party and sign up for Obama Care - excuse me - potus' name is no longer associated with that complete disaster - sign up for the the ACA - my bad. It's not a tax, you can keep your doctor, your rates won't go up one bit, it's great for small business and will boost employment by millions - Obummer promises!

The algos did their jobs last night and ramped price up to close the gap and stop just under another ATH. All is well! Really? Who cares at this point? It's not really worth discussing or bitching about. Bottom line is crisis averted (for now) and we're back to focusing on taper/QE on/off.

Minis 60m - Back in the yellow channel, gap (gray) closed and price is tagging the upper red wedge of death resistance diagonal just under a fresh new ATH. Man things are GREAT! This is all so stupid. I hope you realize that. I'll show a cash chart below, cause you will need to see the island gap they are going to create this morning. That my friend is a sure sign that worse is to come as they continue to push price up against natural forces that say it must fall. Nothing like a nasty double top, at ATH, at resistance, after a backtest, in a rollover channel, overbought, overvalued, false liquidity driven on the promise of increasing debt with an island gap underneath (on cash) - what could go wrong here? 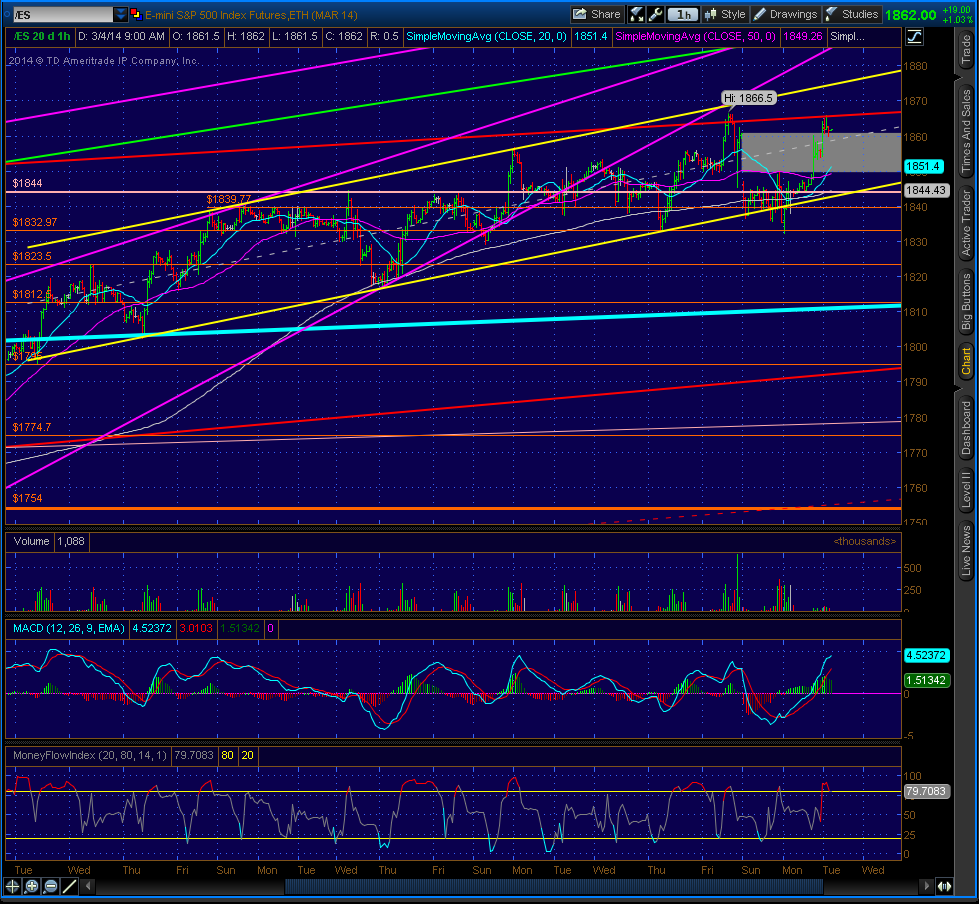 More to come below. I'll give support and resistance numbers there on another chart. Cash chart will be below as well. It appears near term we're back to the SSDD meme. Who knows, maybe the CIA will do a better job next time and truly incite the Russians into a real war. That's something to be on the lookout for.What, look our for more incompetence from the CIA or their actually accomplishing a mission without embarrassing the US? That's a good question.