I can't make this any more simple, it's all about Fedspeak and nothing else. See the tumble in equities yesterday and Fed's Plosser: Market reaction to the Fed statement was surprising for examples. Or you can read Stock futures higher after Plosser speaks.
As the Fed backtracks their statements from last week, confusion reigns for the most part and markets don't like confusion.


The Fed will, in a timely manner, march out a couple of presidents or board members every day for the next week or so to maintain the temperature of the markets. They do it all the time. I think they call the game Dove, Dove, Hawk. These engagements are nothing more than controlled soundbites to maneuver the markets. Like a doctor dialing in your medication, but much more precise and professional.

Let me try to clarify things for you. 1) ZIRP is here to stay, if they ever raise rates go immediately to your bomb shelter. 2) QE is all they got to stabilize the system now, and without it we would've crashed years ago. 3) Nothing is real, so paying attention to any of this is meaningless at this point (as far as reality is concerned). 4) It is all a distraction to wealth confiscation/transfer from the poor to the rich.

I do suggest you keep your vehicles fueled up, and get your gear and bug out bags ready. Things are going downhill fast and there is no sign of anything improving economically or socially at any time. They (the administration, government agencies and military industrial complex) are going to use the Ukrainian crisis to their full advantage to strengthen their positions of power. I thought this would take a false flag event (which may have happened but failed, 0 for 2 now). Of course if this crisis does not spin out of control, which is what they want, then the false flags will fly.

In U.S. Scurries to Shore Up Spying on Russia, if you will read between the lines, you can clearly see where they will use the situation abroad to expand their powers here. "America's vaunted global surveillance is a vital tool for U.S. intelligence services, especially as an early-warning system and as a way to corroborate other evidence. In Crimea, though, U.S. intelligence officials are concluding that Russian planners might have gotten a jump on the West by evading U.S. eavesdropping." Of course this leads to "The U.S. moves will happen quickly. "We have gone into crisis-response mode," a senior official says." So don't think this is going to happen just overseas. Can you smell that smoke? Yea, sadly that's what's left of the Constitution burning.

Sorry that the /es minis chart, the more pulled back, are getting a bit tough to read. They are very busy, but I can not remove any of the lines on them. As I drill down they become clear, but pulled back they are a bit of a mess.

Minis 4hr - Try to follow me here - Rising pink channel where price traveled in the upper half of that channel in the yellow channel broke down and is now moving up in the lower half of the pink channel in the green channel (which was at one time a rising wedge that failed yesterday). When price broke the 50% diagonal of the pink channel and fell it has now formed a falling blue channel. I suspect that price with support of the pink channel and the 4hr 200ma will travel above pink support and under blue resistance and consolidate over the next few days around 1866. At the end it either breaks up and remains in the pink channel or the blue channel resistance holds and a major breakdown occurs. If pink support fails the odds of a top being set are very high. If this consolidation call works out, it could last thru 4/3. 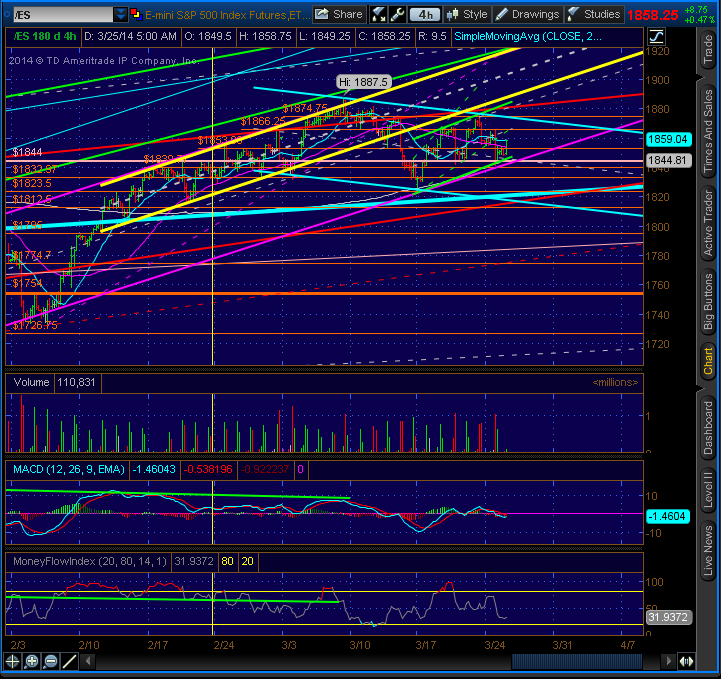 That's it in a nutshell. Watch pink support and the 1844 level closely. There are two very different STB points out there - pink/blue at 1866 and below red (STB's red line of death)/big blue at 1823. If the 1823 point fails I think I will be forced to call a top. It is that critical.