3/11/11 is a date we all will remember in the future. It may mean nothing to you now, but there is a real chance that 3/11 may become more meaningful than 9/11 one day. Today is the three year anniversary of the earthquake and tsunami that led to the disaster at the Fukushima Daiichi nuclear plant in Japan.

STB tries to at least once weekly to remind you of what's going down in Fukushima. I link the ENENews Fukushima page that gives daily updates on the happenings in Japan. The disaster here is more than real. The stories I read are the things that nightmares are made of. It is the worst possible disaster that could happen to the planet, and it is being covered up by global governments. What should be front page news every day is being whitewashed by the global MSM.

Remember not to long ago when the FCC was going to put monitors in newsrooms across the nation to make sure that we only received news on a "need to know" basis? Want a great example of a nuclear coverup that the US MSM is not telling you about right now? Read What’s REALLY Going On At the Nuclear Storage Site In New Mexico? and watch Arnie Gundersen's video that will scare the heck out of you. When an experimental or pilot storage site for toxic nuclear debris, that is in a salt mine a half mile underground, that's supposed to store waste for 250,000 years has an issue, and it begins releasing waste into our air, one would think that might be newsworthy? Well, apparently not.

Neither is the fact that Fukushima is an out of control nuclear disaster that three years after the incident no one can contain. Well it either can not be contained, or no one wants to pay for its proper containment. Either way, the response and lack of action to do anything to solve the problem is appalling. Right now, I guess Fukushima's poisoning of the globe and nothing has been done to stop it, is far less important than bureaucratic power, bribes, blackmail, mafia, and even saving Japan's economy.

News flash! Japan wont have an economy to save if they allow this lack of action to continue. The Nuclear Regulatory Commission is as big a farce as every other government agency. The cover-ups surrounding nuclear incidents is astounding. I suggest you read The Government Has Engaged In a Series of Nuclear Cover-Ups Ever Since Hiroshima. Maybe Fukushima is not that big of a deal, because we're already done for?

Minis 60m - Upper right side of the yellow channel we've been following for weeks. STB warned late yesterday that a bull flag may have been forming, and a turn at the 38% retracenment, the backtest of the upper resistance of the rising red wedge of death and the yellow channel 50%  diagonal, well ..... 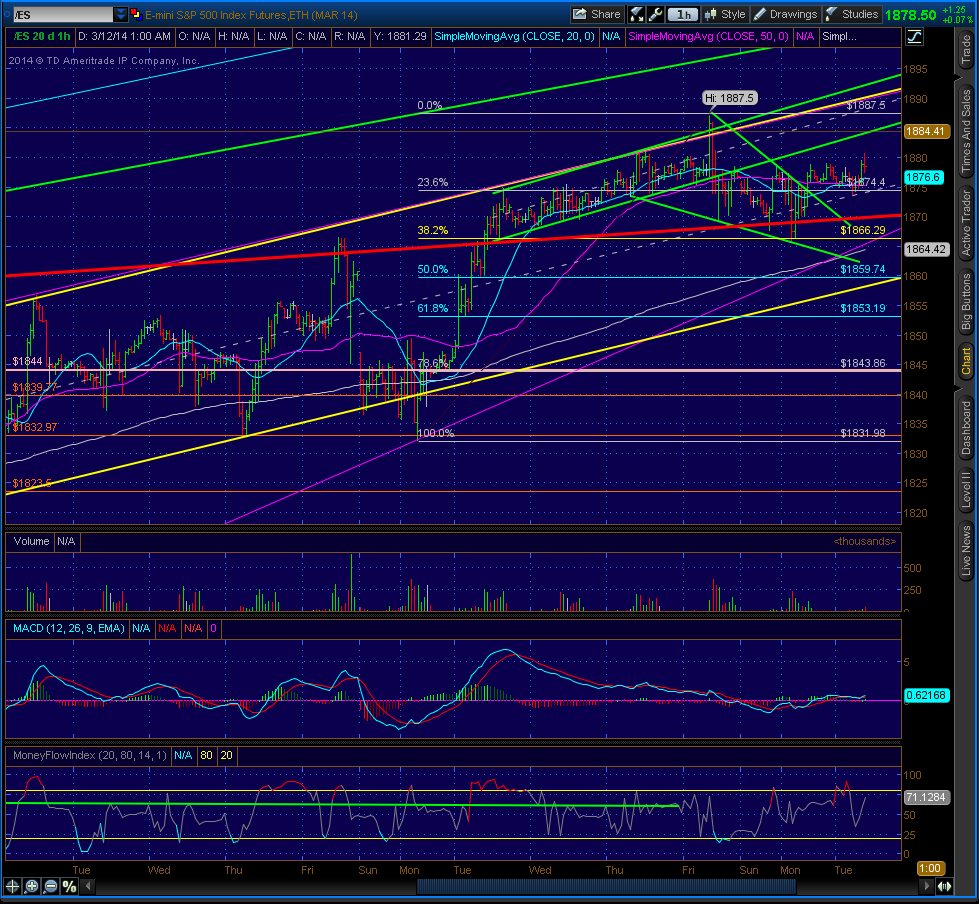 It is what it is, till it isn't. It's disgusting is what it really is.