Can you have something bigger than TBTJ (To Big To Jail)? Apparently so if the FBI blocked in corruption probe involving Sens. Reid, Lee.

"But the Justice Department’s public integrity section — which normally handles corruption cases involving elected figures — rejected FBI agents’ bid to use a federal grand jury and subpoenas to determine whether the accusations are true and whether any federal crimes were committed by state and federal officials."

So let me get this straight, They protect public officials from the law, but they spy on them as well? See Senate-CIA Dispute Erupts Into a Public Brawl. Wait, I'm confused.  Are they having it both ways here? Can you both protect and intimidate at the same time? This is just how screwed up things are in DC and a great example of how close we are to the end game.

You see, if you are in the "in crowd" in DC you are a puppet. You are 100% controlled and manipulated. You have no power and are nothing more than a voting prefect for the elite. Our representatives are bought and paid for shills that are supposed to deliver rousing propaganda to the sheeple and give us the illusion that our "representatives" are working for us.

The new reality is global dominance. Agenda 21, New world Order, all that shit is real. There is really a group of individuals out there that believe they are superior beings, and that they can control the globe and have all the wealth. No, I'm not kidding. This game has gotten out of control and the elite are making their move. They've finally hit their do or die point and are possibly putting the last stages of their plan into action.

I ask, is this what Putin is really fighting against? Is this what he's standing up to? Is the Russian leader giving the middle finger to the elite? Is Putin our last hope against the Agenda 21 /UN/One World Government/central bank/elite agenda? Could Putin be our last hope to fight the system that's trying to enslave us? Just thoughts for now, not saying he is, but could he be? Think about that.

What a day yesterday, and we got the follow through from Asia to a degree.Not as much as I'd like, but it's something. Denial is not a river in Egypt. Denial is what exists as the new normal living in the Matrix. $17.5 trillion in debt and over $128 trillion in unfunded liabilities (see what your portion of this is here) can not ever be paid off. Well, OK, do what the government does and extrapolate increases in spending now with ridiculous and meaningless savings over 1,000 years and we can balance the budget by 3013. Hoooorrraaayy! It's all a joke and it's all about to come crashing down.

Minis Weekly - This all started THREE YEARS AGO. Does anyone here remember my, "we're entering a period of "Unprecedented manipulation" tweet from August of 2012? ZIRP and QE4eva bitchez! And I have not called one top since. Follow the Fed? Yup. Any questions?

Blue LT rising channel to the yellow wedge that should have technically ended it all to the red rising wedge of death and now all this crap up at the tippy top. If we don't get our 4th technical overthrow (this is the 4th technical top) here, I have no clue what they can do in the next overtime situation to keep the game going. Well, Taper OFF is what I'm horrified of and do think will come, but, really, they are facing end game scenarios here. Overthrowing multiple LT technical formations is, well, a bit frothy or optimistic. I think this is the last bull trap, and the Ukraine situation may be the STB "event" I've been waiting for to end it all. Their arrogance and desire for world domination is about to be their undoing. Goooo Putin! 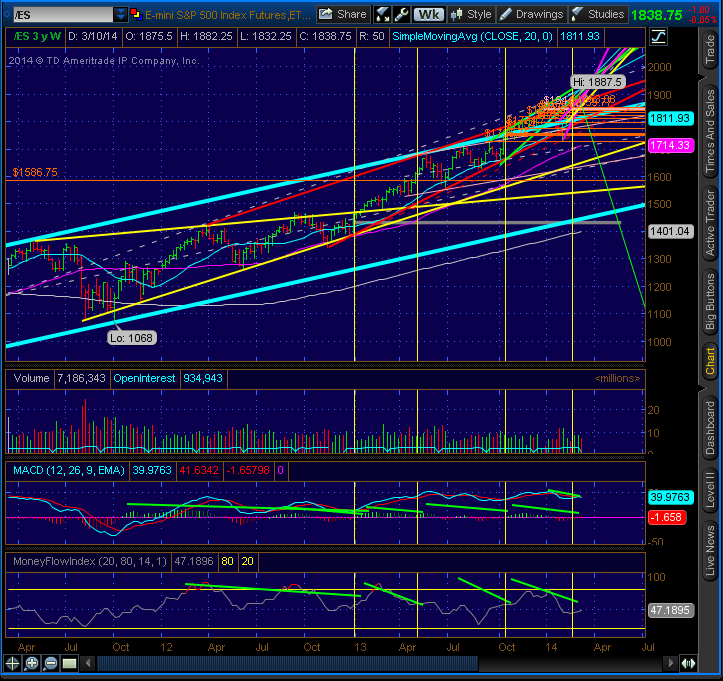 Minis 4hr - I know it looks like a train wreck, but every line here is meaningful. Same story I've been telling you for months - Overthrow, overbought, it's all about the taper and the rising red wedge of death. Note, when the rising green wedge ended and I swung a short for the first time in years on 1/15 i said if they wanted to take it higher they'd have to pull it back cause going vertical was not an option. They needed room to push it higher. Now we have the ping rising wedge that failed and backtested yesterday. They have one last option here. They could lower pink support and extend the wedge, which is an old trick of theirs, or this is it. 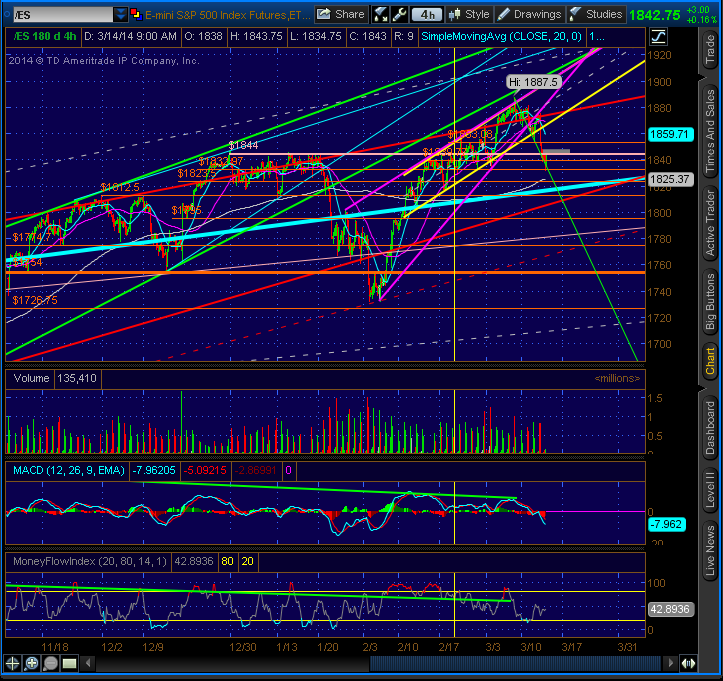 Minis 4hr - Pink rising wedge - same chart as all the rest, just drilled down. How have I not called a top here (I did short it on 3/6)? I have no clue. I think I'm caught in the loop of disbelief and fear. 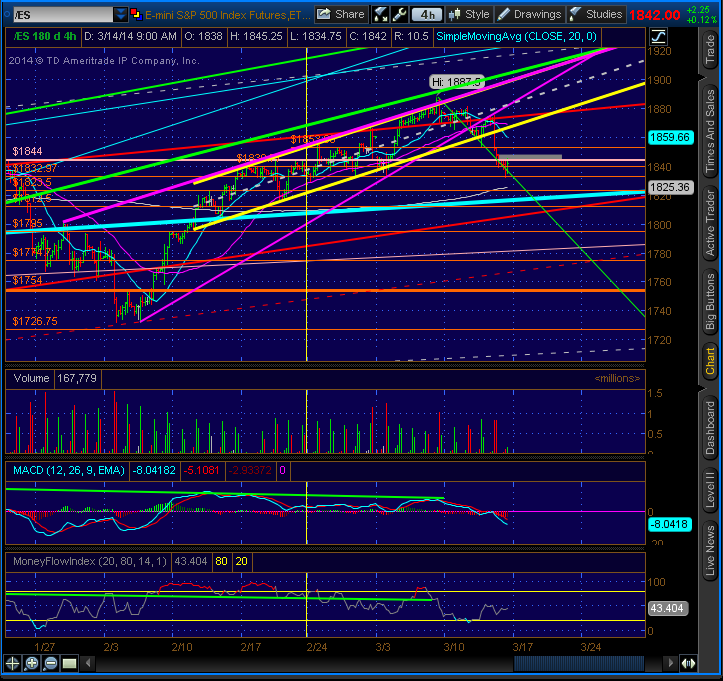 Minis 60m - Two things now that they are challenging 1844. The blue LT rising channel backtest (1816) and the rising red wedge of death support (1805) are what you need to focus on. Let's just say I think there are some massive sell stop orders under 1795. 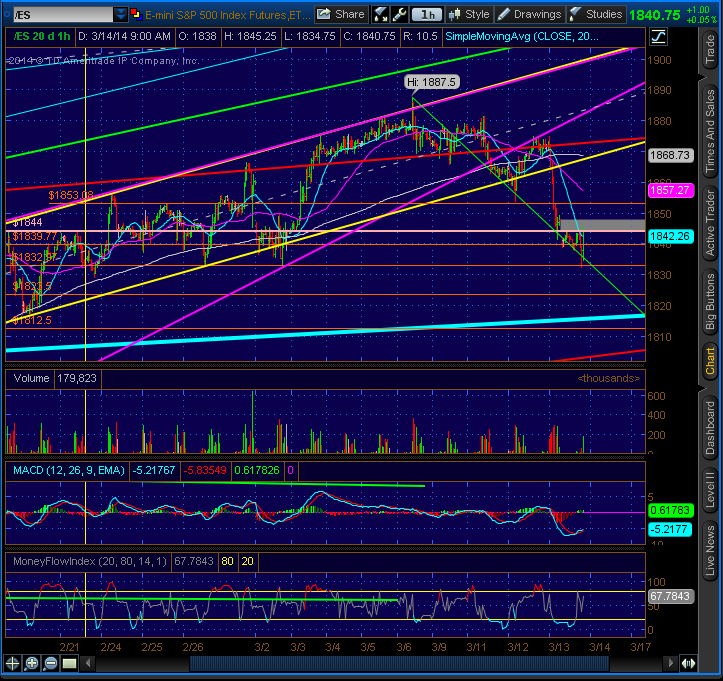 There are a lot more near and long term levels and such out there. I'll get into all that below.