On an FOMC eve there is really little to write about. I hate to speculate. Why bother? What's the point? Like any of this has any meaning or consequence for reality. Not. We're far beyond that point. To ease or not to ease, that is the question! Ah, but always maintain the potential promise of easing, and the world is yours! The markets will react accordingly (as in do what they want them to do) and there is nothing else you can do.

Well, Crimea is now part of Russia. Surprised? I hope not. Putin vs. Potus, I don't think so. It's more like Putin vs. Poontang - that's about the way I see it. We're so ..... we're .... so far emasculated. If you think there is a serious question about our "male" leadership, you are right. Manly in American leadership only exists in Hollywood now.

Most importantly we've lost the moral high ground. Of course no one has, or will, replace us in that role either. We give and donate to inferior nations to control and expand. Humanitarian is a code name for takeover. Whether it be for big pharma, Monsanto, the military, it's all about expansion of the state and control of regions of the globe. It's about corporate conglomerates, ours specifically, expansion and growth "making the world a better place". LOL. Charity? Charity is now a Trojan Horse.

The world is rudderless, adrift in an ocean without quality leadership (except for apparently Russia of course, which is pathetic). Drunk and awash in greed, power, lust, we roam the sees looking for moar, another conquest, all in the name of spreading democracy. Democracy? Really? That's so 1960's.

Funny, no one is buying that "spreading democracy" line anymore. The quest now is for riches and power, to spread capitalism in the guise of democracy far and wide to be dominated by our global conglomerates. Once the moral leader, we're now the Amoral leader of the globe (I repeat, it all died when JFK was assassinated). The Golden Age of Camelot is dead.

It's about time someone stood up and called the elite's bluff, well done Putin, well done. Hopefully he's setting the example that our hypocrisy will not be tolerated. What are we gonna do, impose sanctions? LMAO, we're so economically weak we can't do crap. Want to go after terrorists that weaken the nation mr. potus, go after the Fed and the central banks, they are the biggest threat (other than your administration) to the nation on the planet. Bottom line is we're so full of shit our eyes are turning brown and now everyone knows this.

As mentioned, FOMC eve. We rest and wait for our marching orders.

Minis 60m - Possible STB point at 1875 tomorrow just above where green, red and yellow meet. 1862 to 1865 is first resistance which is in line with that IHnS target I showed yesterday. 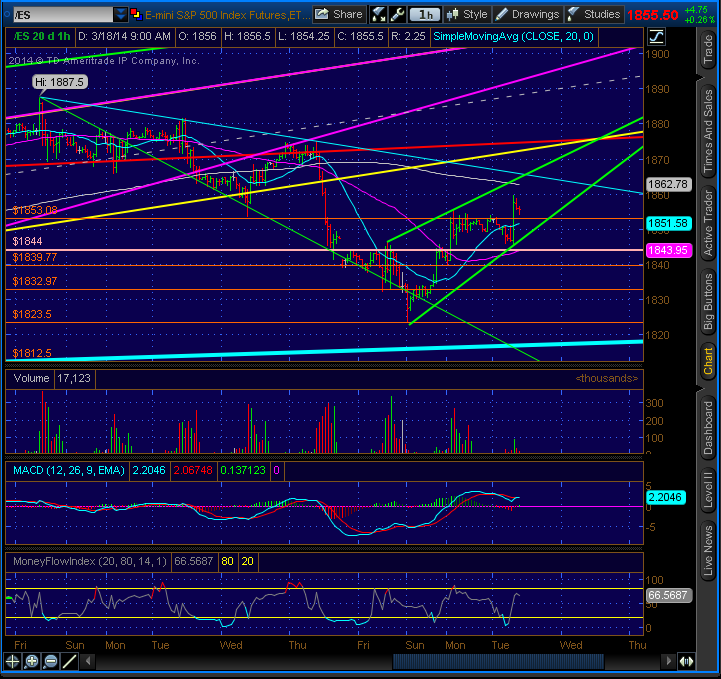