Thursday June 18th I did my State Of The Charts Post where I gave it my best shot at predicting what I thought P2 would look like and how it might play out with three scenarios. So far I look pretty fucking smart, but I'm not counting my chickens just yet. I got my doube top (or at least close) to set some divergences. Now can I get the fall to 847 for what I think is the B in this ABC corrective of the great fall from the top in '07. This move up must have a deeper retrace (at least 38%) IMO before moving higher.

Below is an updated chart where I appear to be on track as far as form (and pretty close on time - pure luck). I have not changed anything in the chart except for narrowing a few lines in the period that has occurred, deleting a few annotations (sc is lacking there in what it allows) in the indicators and adding two vertical target lines for my Option 1 scenario. The previous chart from the last post is there for prosperity as is this one. Look, I'm not Csaey or Nostradamus. I called the last month or so pretty darn good in the face of all the permabears telling me I was fing nuts, so I get to keep going.

The permabears won't like the near term call for the end of this year, but that is how I still see it. Manipulation and earnings surprises galore will lead us to higher highs before lower lows IMHO. Now is the time for the fall to 847. Sometime soon I think we plummet but this will not be "the" fall.

One main source for power for the bulls will be "earnings comparisons". Remember the fall and the earnings comparisons over the first year were sensational. Now the comprables are "post crash". They are going to be comparing shit vs. shit from now on with the analysts from GS and the other banks giving it their best shot at making their buy calls and other fantasies come true. Ya think CNBS will have a field day forgetting about any '07 numbers and touting the BS vs. BS numbers.

The three options still exist. We turn soon, but IMO this is not the fall. If I am wrong, option two is still out there. P3 is coming when is the only question. The only way we'll know is the form of the fall. Don't get me wrong, we're gonna crash, just not yet.

Look, it is a balsy upopular call with the crowd I run with. I hope they are right and we get this bullshit over with sooner than later. It is just how I see it playing out.

I'm still struggling with the new computer, java and stockcharts. Obviously I am screwing around with the layout. Thanks for the emails and feedback. Just trying to make things better.

Thanks for the feedback and visting. GL trading. 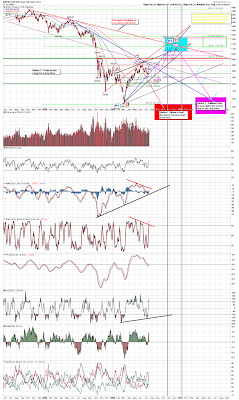