This post prescribes to SPX only. I know others exist, but not right now. I do not prescribe to the '38 market did this and in '02 it did that, so please (S135) don't bring it up. This is a financial crisis of enormous proportions that will cause great pain and is far different than anything else we will ever experience again. IMHO this will end with us as a socialist state or being so over regulated we won't be able to take a crap without a "load" tax being applied IMHO. I am a EWT prescriber, but do not count, nor do I pretend to count. I am not a TA purist either. I'm sure as hell not an economist (MBA Finance). I prefer to take in and digest all the data and attempt to use TA to form a convoluted best judgement call (for lack of a better description).

This is not just a bubble burst. It is a giant credit bubble that they are trying to pump back up that will explode like Mongo in Blazing Saddles. Consumption will not return and global depression is possibly in order. States are soon to be falling apart, employment is pathetic and China and Japan have us by the balls as far as the value of our currency is concerned. And the fearless leaders have put us thru a barrage of lies and misrepresentations that are nicely chronicled in TD's ZH post here The Confidence Game In Quotes.

On to the chart -

There are three scenarios 1) Down bounce down 2) Straight down from here or 3)Trade in a range. I have deducted to prefer option 1 very slightly over 2. 3 would be OK if we can keep the volatility (from a trading and overall economic perspective).

I believe the upper trendline (red) will be tested on a pop-off overthrow E move. I have gone as far a placing Shanky's Blue Box(TM) (obvious knock off of the infamous Kenny dot (TM)) as a target zone. I do not believe the CNBS parade of crap, nor the GS/JPM/MS manipulation of the SPX, nor the bank's accounting fraud, nor the earnings manipulation scheme, nor the constant manipulation of the Treasuries has come to a halt just yet. See Who Are They Trying To Fool? (TNX) or We Have Mortgage Lift Off for a couple of good reasons for a move down very soon.

I do believe this P2 (bounce/correction) will complete a minimum 38% retracement from the 1576 top. I do not believe the weekly indicators are showing the necessary divergences for a significant turn just yet, but they have topped and this next pop will set the table and the proper divergences. The daily indicators are IMO in a place where they have been overbought since the market should have topped on April 20th and have the necessary momo for a decent push south here to the SPX 846 level.

IMO RSI on the weekly will be the key to the reversal just like it was at the low. A longer trend must be set and when that breaks launch your missiles. Dan, K and I will all have this under a microscope. Finally, when they start heading for the gates you'll know it. I will also throw out the monthly indicators are headed north right now.

One more short squeeze is in order. I believe we will see deflation before inflation and inflation will be the killer. Bond yields are not, and will not be a viable alternative to equities till later. The dollar is just not ready to crash just yet. Falsified Q1 bank earnings will show up in Q3 or Q4 earnings reports. I do believe there will be at least one instance of a market shutdown during trading hours. We have not had capitulation. Thus, I (of all people, can't believe this, no I'm not on drugs but should be) think we have more upside.

Yes, I am pulling a Danerik "time will tell if its P2 peak or not" and prescribing soundly to multiple scenarios. IMO one, rightfully so, leads straight down from here. Not actually straight down, but you know what I mean. Option three prescribes to a possible extended trading range (the L or WW shape some are calling for). Enough said.

I have kept my fall to 850 and then up scenario in tact, yet I have upped my P2 top by roughly 100 points (ouch) from 1021 to 1121ish. Am I nuts? Well, that's obvious and I'm sure I'll hear it from most of you. I'm even questioning my own call, but that is where I am. I am a permabear and do believe in the ultimate crash, just not yet. I am playing the manipulation card.

All of the numbers are on the chart. The pink dashed 5 wave move up to P2 is not exact although I tried to put it to proper scale. I do believe that a larger rising wedge will form and I placed the pink 5 wave move into that potential wedge. Time elements may be close, but are NOT specific. I do think P2 ends at or near EOY though. Interestingly enough (I'm NOT calling it) but my scenario looks like an inverse H&S play out to about my same target. I have not picked an ultimate bottom, but if pressed the options would be 651, 575, 475 and 432. These are not set in stone and are too far off to be really discussed (but I know someone will ask).

GL trading. I look forward to your comments on this one. 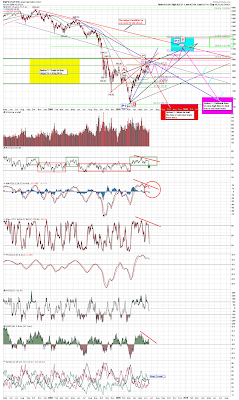