Not So Fast My Friend

I am in agreement with Daneric's chart scenario here. Kenny's count that EWI has not coppied yet is given here. K has C=A at 963 which is lower than Dan's target near 988, but he also has a nice green target area above that including 988. At this time neither have SPX crossing 1000 to my knowledge. The push higher and possibly a truncated 5th wave for a nice double top on low volume would be really nice.

What do I see? Just so you know I do my own stuff (Don't want K putting me in the same group with Hoch). In the chart below look at the three pink circles. In each case there is a significant breakout from a triangle in and ABC move to a higher high. In each case this higher high has begun a new period of consolidation and formed a new triangle and then another ABC breakout. Notice the strong white candles thru the top trendlines, a pullback to test and nearly a C=A scenario in each case. If this move completes a proper retracement of 50% like the past B waves have and C=A, then the target range for the next push up would be 965 to 980. Then we begin the consolidation process again. The great fake out on April 20 was the only time SPX set a lower low after one of these breakouts. This will be my key if this scenario plays out.

The 60m and 30m indicators are pointing to a move higher tomorrow. The VIX is getting close as well, but has one more push south IMO. The VIX daily RSI is at the P2 trendline, but I expect one more rejection. It is running out of room to consolidate at these low levels. When this breaks it will be another confirming indicator that this upward move is over.

Will this be P3? (I sure am seeing a whole bunch of P2's showing up on charts lately) Well, if it is I will be disappointed. Here is where I go out on the proverbial limb and disagree with D and K. I have 5 past posts relating to P3 causes and none of them are here just yet. I believe we don't make P3 till the fourth or first quarter. Thus this would only be A and a pullback to the 800 - 775 level and another push up to the 1021 - 1055 level is in store. We should have at least one more good quarter of earnings manipulation and banking slight of hand. How will we know? Pay attention to the structure of the fall. Is it impulsive? Are they fleeing for the doors? If so P3 is in. I do believe P3 will be very evident and will have at least one incident of the market being shut down. The public has experienced the last fall and they will not hang around for this one. Swine Flu may come back big in the fall which would possibly shut things down. Please don't take this lightly.

I am positive the O will give me some great material for a serious rant tomorrow. I am assuming that our muslim president will kiss some serious mulim ass tomorrow in his speech. You know these people want to be our friends, they just love us and our ways and really respect our Christian views.

Wonder what he's gonna take as a gift? Maybe a Slap Chop and a Graty?

Funny - now I look at this chart differently and it looks like a massive failed H&S I did not pick up on. I did not just say that did I? I did, well, I did not call it thank goodness. 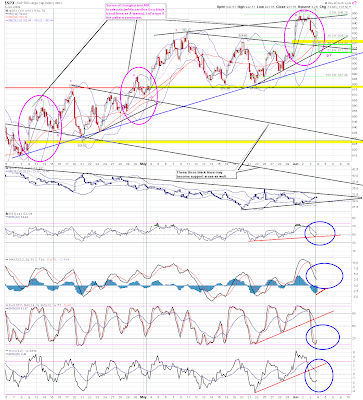