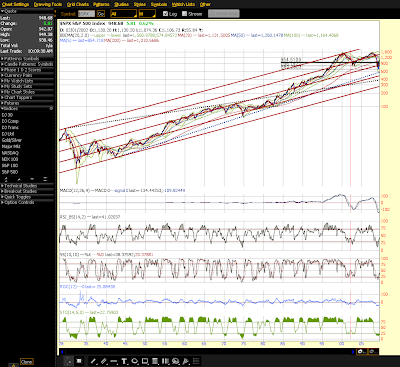 Above is a LT chart of SPX. The channel drawn includes the 25, 50 and 75% lines. Please notice the last time we touched the bottom of the channel was in 1942.

Bottom Option 1) The blue dashed line has acted as the major lower trendline since 1942. What is significant about this line is where it ends - currently at the bottom of the lower Bollinger Band (BB)near SPX 574. A reversion to this line is more probable IMO for various obvious reasons. A 61.8% retracement from the 1932 low to the 2007 high is near 604 SPX. This blue dashed line is my current market bottom target (600 - 575 for rounding sake).

Bottom Option 2) The black dashed line nicely dissects the chart. It was the markets upper trendline till the breakout in 1985 and the bull market that ensued. I believe a reversion to test this trendline is very possible. This is my secondary bottom target.

Bottom Option 3 & 4) The 75% and lower channel trendlines are severe circumstance targets. The LT channel should revert to its lower trendline eventually and if P3 is as severe as everyone is predicting I would not be surprised to see either of these tested. The 75% line has good historical support from 1994 - 95 at 475 SPX.

Bottom Option 5) We bottomed. About the only thing I see bullish here is the monthly 200ma (moving average)has also acted as support thru the years. Its violation in 1974 where it broke down, recovered and then acted as support for the next several years looks similar to today's action. The ensuing flat market where the 200ma acted as support thru 1982 might be expected if the preferred ideas of further market weakness does not materialize. 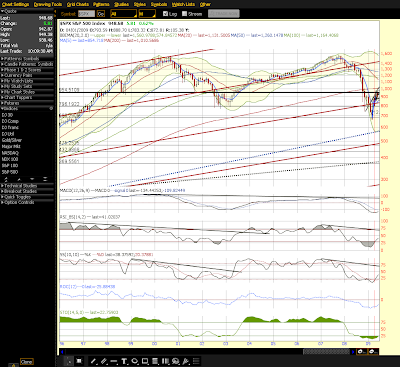 Above is the same monthly chart of SPX going back to 1996. Several things to point out here. You can see where the LT channel lines come into play better. As you notice we are flirting with the 50% line now running around 850. Remember, this is the 50% line of a channel running back over 80 years. I like this as the pullback target for the correction of P2 (or the near term correction of this bull run) and possibly as a good support line for further action as it will interact with the 200ma later this year. Also notice the support resistance line at 954 going back thru 1997. This line (and the surrounding area) has had several major hits. I expect it to hold as resistance here, but if it does not a move higher to 1000 to 1050 is expected. Also notice the monthly 200ma is at 1010. As noted above, if this cracks and we play out like '74 then we possibly track it for several years as in the 70's.

When does it all end? Notice the diagonal trendlines on RSI and STO indicators and SPX's action with its 20ma. When all these cross it will be over IMO. So, I am expecting a top around 954. A pullback to 850. A run up to 1021 - 1055 and then the pullback to 600 - 575 or worse. As for time frames for all of these actions, my best guess is that we have the correction to 850 soon then finish the year strong. At that time earnings manipulation and green shoot hysteria will catch up with everyone and Alt - A loans, commercial real estate, higher commodity prices, unemployment, credit issues, bank failures, possible dollar collapse, etc... will bubble over.

Don't get caught up waiting on the downside action. The green shoot BS and the blatant market manipulation should not be ignored and you need to trade the trend and the trend is up now. Do not ignore the near term positive news. Be patient and wait on the impending correction.

Pimco's Gross: Boom Times Are Over is a good article. Bill thinks, "Gross also said, with certainty, that the dollar will lose its reserve status. "We simply have too much debt," he said." When that happens my first 4 bottoming scenarios come into play.

As I have noted, I am trading the 60m indicators when they hit their extremes both up and down with tight stops (Some of my charts have buy and sell lines in my chartbook). I am avoiding like all hell the 3x ETFs except for some day trades, but I rarely swing trade the 3x.