Is The /ES Channel Toast?

This post could have been another "case for either way" like I did a few weeks ago. The indicators, ma's, trendlines all are in precarious positions and the /ES has closed above the top channel line for the first time.

My readers are familiar with the following charts. For the first time we have had a closing bar above the major /ES channel down. We have had tails thru the line but not a closing above it. Each touch has eventually lead to a rejection and further move south. I'm unfortunately leaning on a further move up. This is based more on intuition and an educated guess of which way the indicators will move.

Is this the lower right shoulder of the inverted H&S formation playing out or is it a breakdown at the upper channel line? To add to the confusion the 60m indicators are topping out, the dailys are bottoming out and the weeklys are in the middle halfway south. SPX in the am will have completed a 61.8% retracement of the move from 956 to 888. Pick your poison. (links to my weekly and daily indicator charts are a the bottom of this post)

Last Thursday I called for a move to 907. We'll be there in the AM. I am really not ready to call for a move much higher than that. I am a believer in earnings manipulation and the earnings trough. We know the major banks (see GS record profits) will do well and possibly lead. INTC surprised. CNBS will hand pick the rest of the earnings to report and twist the way only they can. On the other hand I may have had too much of the manipulation kool aide and may miss read this next fall all together.

I'm really leaning that we're getting ready to finish P2 up here and have another quarter or two to deal with more unrealistic upside action. This pains me. I was hoping to make it down to 847 before the correction higher (and still may get it).

S135 your channel may be going down brother (but then again it might not). 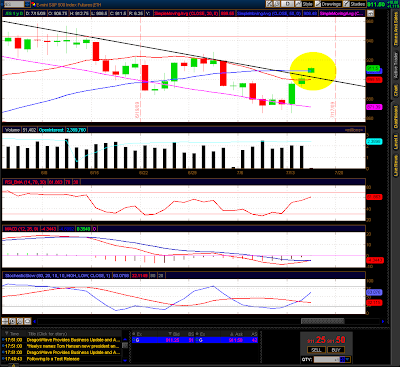 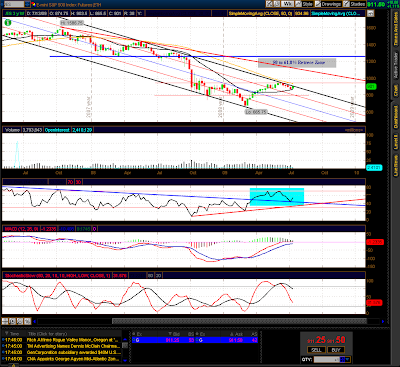