While trolling the blogs tonight I came across a some good articles on manipulation of the price of black gold, Texas tee, oil that is, and since oil price manipulation causes a serious boil on my ass that can never seem to get healed properly I thought I'd go for some late night therapy on the 'ol blog.

The problem of price manipulation would be solved so easily if they would not allow the people without any actual skin in the game to play the game. What the hell is JPM doing owning millions of barrels of oil held on a tanker off of some coast in Europe? Seriously, what right/purpose/need does JPM have owning raw crude other than to profit handsomely off of our already struggling pocket books? This is a (once) great American institution giving the country that bailed its ass out of oblivion a 20 foot oil enema and not even saying thank you in the process.

Fuck 'em I say. If you don't have a refinery, you can't buy the shit ANYMORE! Wonder what this would do to oil prices/demand? (also note that this type of action has driven (falsely) the BDI up). It is all a rigged game at our expense. Let's call it a hidden tax.

Sorry for that, anyway, Naked Cap has Verlerger on Oil Glut: "There has never been anything like it". "For eight straight months, oil supplies have been running about 2 million barrels a day higher than the global demand of 83 million barrels a day, Verleger said. Eventually, he and others predicted, suppliers will tire of paying to store all of the surplus oil and flood the market. "That is the largest and longest continuous glut of supply that I have seen in 30 years of following energy prices," Verleger said. "It's a huge surplus. There has never been anything like it."

Wanna do the math on 8 months x 2 million surplus barrels a day? That is a shit pot load of oil stored somewhere, and I would assume that there is no place left to store any more. So what happens with all the oil say bought in the $55 range with prices dropping? It gets dumped and then the dominoes start falling. This could get interesting. Is this a mini oil bubble?

And our Buddy Denninger had this at The Market Ticker - Congressional Smokescreen (Blown With Oil). I love Denninger. He's like a really, really smart me with better language.

Here is what he has to say, "Folks, the solution to this sort of stupidity is simple: REINSTATE Glass-Steagall in its entirety, and return commercial banking to the utility function that it is and should be, as it is both regulated and protected by the government against the full consequences of failure.

Demand that those who want the "hedging exception" demonstrate their actual use of the commodity in question in amounts that correspond to the hedged positions held, with nightly reporting requirements to the CFTC.

But no! We instead have to see oil go to $150 last year and then double into collapsing demand and commercial banks leasing tankers to store oil in, purchased with federally-backstopped money, that they then intend to release into the market and sell back to us at a higher price at a later date!"

ROF LMAO - We are so on the same page here. I hope you get it. Folks (I use Folks and so does he, but I'm not copying that. I'm from the south and that's just what we say down here), if a brain like Denninger and a meat head like me can so simply put a common sense answer to this problem then why can't our leaders? Why, cause it is fucking rigged as hell. They have been screwing us for years (XOM and their $35 billion dollar profits - that's our freaking money - and not to mention all of the alt energy projects they have bought and shelved (future post in that one)). Shit. What the hell?

Lets add from the WSJ - Oil Speculators Under Fire. "In Washington, the Commodity Futures Trading Commission, the main U.S. futures-market regulator, said it is considering tougher regulation of oil-futures markets. The proposed rules, which drew immediate criticism from traders, would seek to curb the influence of speculative investors such as hedge funds and investment banks by limiting how much money any single trader can bet on any one commodity at a time."

Anyone get the feeling the shit is about to hit the fan here?

I'll do a more in depth post on this. I searched some cool things and this post really does not do any justice to the real deal surrounding oil prices. It will be a fun and easy rant.

Here is a chart for your viewing pleasure. Note the breakdown of the 30 and 45ma's and what happened the last time this occurred. If this puppy is in the midst of a 5-3-5 move south, $20 may be a real possibility. 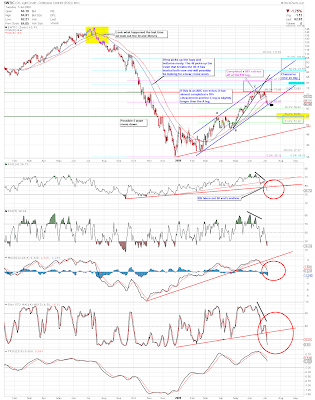