Minis down 6 and I think it is gonna get worse. The downward pressures on the market will become to much to bear. The markets have been amazingly resilient given the news especially over the past two days. We'll know the jobs numbers before the open and then tomorrow we get the GDP numbers. With earnings season getting kicked off the next month should be very interesting. If you are a bull, I hate to say it, but the run to glory and the V shaped recovery is over. The next talk (venom) to be spewed by CNBS will be the W shaped recovery. remember you heard that here first. W a million more times than you have heard VVVVVVV. Shanky says there will not be a letter that can define this recovery cause there will not be a recovery for a long time. With over 13 trillion in debt (and growing) and noting to show for it so far, a war about to get going and the greatest environmental disaster in history just now getting cranked up,  how can you expect anything else?

Earnings Calendar - Yup, it is that time of the year again. We still have till mid July before it gets really going. That may play into some pricing action over the next week or two if revisions start coming out.

Economic Calendar - Durables, Oil and Natgas this am. GDP and Cons Sentiment tomorrow. Not sure what BS the BLS will try to throw at us this time, but I suspect more worthless lies from another discredited government agency.

Pivot points - Not sure they matter much with the range these days.

Really not sure which chart to deliver this morning as most (with me) are struggling to get a grasp on where the market is in time and trend. Has it topped for what the EWTers would call 2? Has 1 even bottomed yet? Is this just completing a B wave of the corrective and are the bulls gonna pull out another 100 point run on the SPX to complete it? That is the way it measures.

Right now the trend is down and the news is horrific, so you gotta stick with it for that reason. I pretty much got my 1090 call yesterday, but it should have been worse given the housing data that the HFT bots are ignoring, cause they do not trade on emotion or with any regard for fundamentals. These are some wacky times for sure.

I'm gonna go with the daily chart needing to bottom out once again. Barring a GDP or jobs surprise it is possible that the 1050 level could be in the cards here. The big question still being, has this move bottomed or not. I never got my 1020 to 1000 number I wanted for the low. The support at the 1090 level is proving to be stout, the 30 and 60m have/are bottoming or embedding, and the dailys never really topped out which all should be heeded as a bear. I don't like the call, but I think it is the right one. With either the corrective being still in play or the turn being finally in, I can't say till the markets make it more clear. 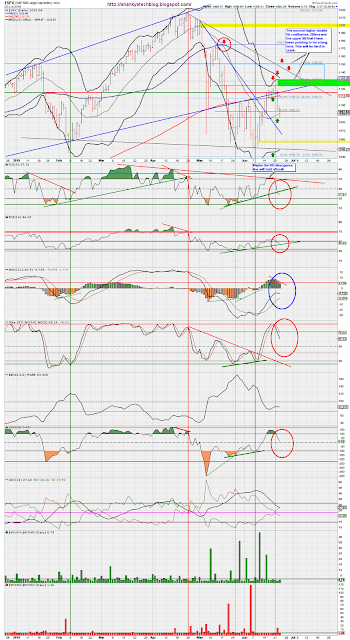 This 60m chart shows another possibility I am looking at for this corrective. 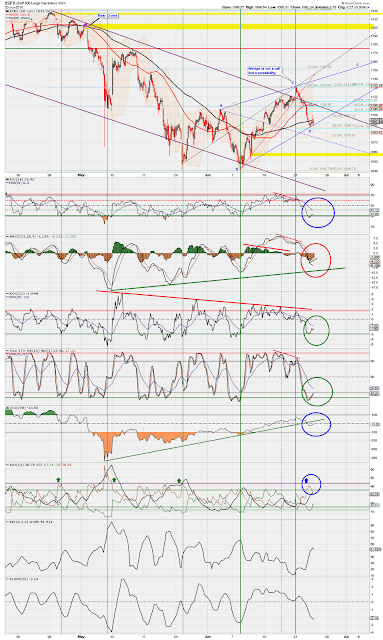