Yes, It Is That Bad

Nice to go away and know nothing has changed. The world is still rotting from he inside and the maggots are beginning to bore holes in the skin. The process of decay is a long slow one. The elements that the body are exposed to have a lot to do with the process and as long as the Fed keeps it warm and dry, the process will just be extended. Infinity is not an option. Once the process has started there is no reversing course. 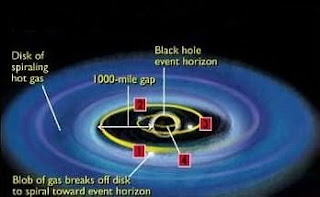 I often compare our financial situation to a black hole and that we are on the event horizon. This is the point of no return like the edge of a whirlpool but worse. Beyond this you are sucked into the vortex where nothing, not even light, can escape.The gravitational pull from our staggering amount of debt is the collapsed star at the point of singularity. Eventually it will pull in and destroy everything that is in the outer ring until nothing is left.


I'm of the opinion that at this time you have to have this mental outlook. You have to go to the edge. You have to understand that the financial world is collapsing around us. The unsustainable debt crated by fractional lending and the resulting collapse of credit markets can only be sustained for so long before implosion. You add up the numbers that I present here nightly? You tell me if the simple math adds up to any other conclusion? Every effort now to save something only adds to the mountain of debt that no country can support.

All we are managing to do is keep the bubble afloat. It will burst eventually and everything goes down with it. Once the first domino falls the chain reaction will be unstoppable. We have two paths to take. One, the rich get richer and the middle class gets eliminated (which is the current, wrong and bad projection). Two, we suffer such a deflated state that nothing escapes it's wrath, and we become a nation that can actually afford to manufacture things again (my preferred and I believe the eventual route). The option of some sort of global warfare will be out of the picture. No one will be able to afford it and it is possible that compassion may rule if we get the right leaders in place.

The bailouts can not continue. Do you care to explain to me where the funds will come from to pay off the current deficit? And we're gonna keep adding to it? Be realistic people. The math does not work no matter how many disaster default swaps or whatever friggin bogus instruments they decide to create to fund or insure against this mess. Billions eventually become trillions and trillions become quadrillions and so on. The fraud will have to stop at some point. Their lies and corrupt acts will catch up with them. What will the solution be? There is only one, massive global default. It is coming. I believe 1000% that it is the only exit door that exists, and I believe they know it and are measuring the move at this time.

Not if but when, times are gonna get really tough. They are setting up for it now. Why would they enact the money market limits or be discussing the socialist act of confiscating 401k assets? Regulation, LOL, have they fixed one darn thing yet? Do the lies outnumber the solutions? Does the corruption train just keep on keeping on?

You do the math. Yes, it is that bad. There will be a rosy future once the purging/exorcism is complete but not till the full frontal is experienced.

I'll just toss two relatively normal/daily occurrence articles at you from Mish this evening - again YOU DO THE SIMPLE MATH.

Cali and Illinois are friggin broke PERIOD! Illinois Pension Fund $61 Billion Underwater; State Borrows Money For 2010 Contribution; California $20 Billion in the Hole Again Get it? that is a pension fund that is $61 BILLION under funded. Care to tell me where the thousands of public servants are going to maintain their promised and entrusted living from in retirement? Bueller? Bueller? Greece ain't shit compared to this mess.

I'll be back in the am and on a normal schedule. Sorry for the break in the action. Take care.
Posted by Shanky at 4:12 PM