MCD and KO do well. Ignore them, cause all eyes are on the PIIGS and who else might be invited to play Default Dominoes.

I'm sticking that it all comes down to Greece, the other PIIGS and the EU. Nothing else really matters anymore. The focus is there. The only question is does the thief come in the middle of the night or during trading hours. How much of it is priced in?

The rumors and news surrounding Greece and the PIIGS are insane. Just how much of this is in the control of GS and not Trichet or any other fraudulent government money man.

What was up with the secretive banker meeting in Australia while the G7 was meeting on the other side of the world?

E-mini 60m - Channeling down (Sky blue lines) after breaking the Green support line that held the market up since June. Reversing near the 38% retracement (yellow line at 1037) of the 862 low. The dailys as expected are pretty oversold and this mornings pop of 9.5 points is not surprising. Any good news will cause a thrust these days and the fact that things in Greece have calmed down somewhat is reason for the dip buyers to get active again. 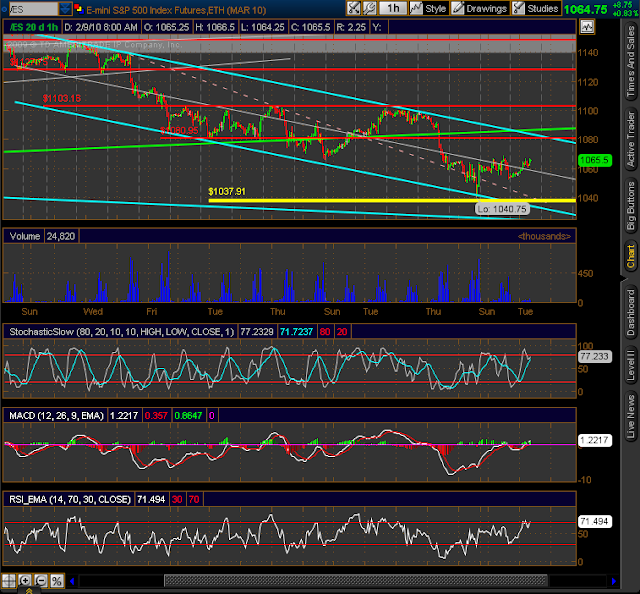 SPX - I still contend it is fighting off the upper bear market TL. It tagged it again yesterday and reversed. Can it hold is yet to be seen. The daily indicators are struggling to gain ground and remain oversold. The RSI5 divergence tried to give way yesterday, but may be coming home to roost today based on the futures. 1085 is the max if we even get close to that. 1110 is the 68% retracement at this time and the 50 ma on the daily chart. It is only a matter of time before the collapse. As I mentioned earlier, will we wake up to it one morning or will it happen during trading hours.

Dollar - Is it having an overthrow of a wedge? It would be backtesting the upper TL right now if it is. Pretty overbought, but this will not mean anything if a flight to safety occurs. I also think there is a possibility that an ABC has completed, but looking at things politically I believe the rush to safety on an EU breakdown sends the dollar to 89. Then it crashes with everyone else.
Gold - Getting a nice pop this morning. It is oversold and might have a little upside left. A pop to the 1085 - 1090 range may be in order. There is upper channel resistance there.
Oil - Oversold and bouncing off of lower channel support. If this support cracks 65 and 59 would be likely stopping points. I called $55 months ago. That TL and target may have moved.
Natgas - Revesding off of the upper channel line, but at support. Indicators are mixed. So, /NG is in a very precarious spot. Charts are telling me there is confusion among the ng troops, that is usually not a good thing.
EUR/JPY and /USD recovered some yesterday and have been crushed over the past month. As correlated to the dollar, they look to have completed ABC correctives, but given the PIIGS situation, I have to expect worse. If this is a 5 wave move we are in 3 down and should be expecting a 3 of 3 soon.