Another 480,000 lost. When do you think this "norm" will finally catch up with us? Wait till you see the Explaining The Government's 1.8 Million Job Overestimation In Pictures. Did you catch that headline - 1.8 MILLION OVERESTIMATION! I tell you day after day that they are full of shit and you can't trust a damn thing out of them. So we're gonna have a "slight" adjustment that is going to ADD ONE MILLION people previously unaccounted for to the jobless. Does anyone really know the truth? It will implode and it will not be pretty.

Earnings Calendar - Jobs reports and a bunch of other fictitious numbers will be released today. 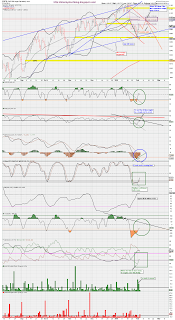 SPX Daily - Bears came back as expected yesterday. Jobs number sank the futures. The question is are we in 3 of 1 (the major leg down) or is this still the B leg of the corrective. The thought that this could be one last B down of P2 is fading fast. GS and the boys would have to pull their 1,000th rabbit out of the hat and I believe they are out of rabbits. All we can do it wait and see at this point. Lets look to see if it gets to 1087 support. I'm in cash.


Gold - Met the upper TL and reversed. Daily indicators are a little out of whack but are more bullish than bearish. 1066 is massive support. I believe the 1000 level holds for a long time.
Oil - Pulled back yesterday on the numbers. I think this is a corrective and another buying opp will be soon.
Natgas - trending down and it will continue.
Dollar - Popping into an overbought situation. It will need a correction sooner than later.

I'm getting worried. My gut bearometer is spiking. Really not comfortable with the global situation. The dominoes start to fall soon I'm afraid.We'll see this in 3 of 1 of 1 soon and then the fun begins.