OK, so China decides to start cashing out and the Greece volleyball keeps getting bounced around. It appears the global financial fireworks are starting to launch some of the bigger shells as we work our way thru the show. I am surprised there was not a bigger move on the China divestment announcement. Remember there has to be a buyer for every seller, so you gotta wonder who that will be (since our government is the great backstop of the planet). I guess the market is saying this deal is a wash. If you look at the action in the currencies during the Greece announcements yesterday, the dramatic swings on the in/out announcements were pretty wild.

Economic calendar - Lots of numbers pushed back to Friday due to snow storm on east coast (maybe a few global warming meetings should be canceled as well?). Uncle Bennie speaks at 10:00.

E-minis 15m - Channeling up towards resistance. The dailys still remain oversold even after this move up off of 1040. Looking at the indicators I'd be forced to lean long or for downside volatility to be little risk. 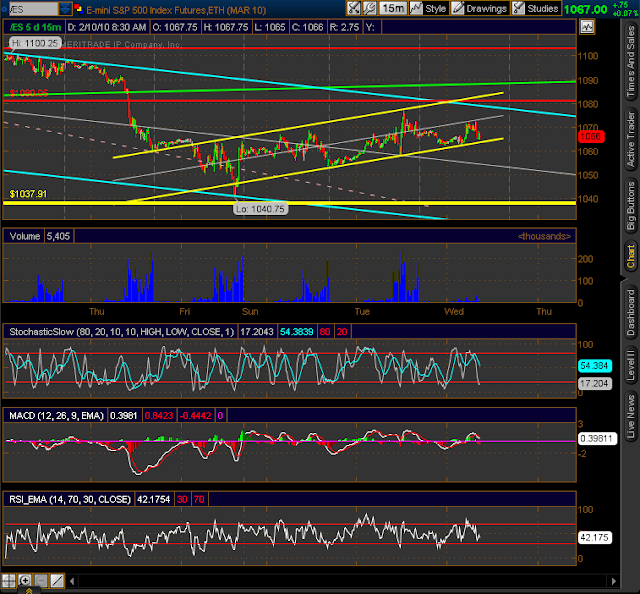 SPX Daily - If those upper TL's on the indicators start to give way, the bears are gonna be pissed. If they hold and throw the market down for one more pop, then there will have a nice set up for a larger corrective wave to come. It is oversold, the RSI5 divergence, the looks of some of the other indicators and the possible solution (if you can call it that) to the Greece issue may actually have us in 1 of 2 of 1 of P3 already. 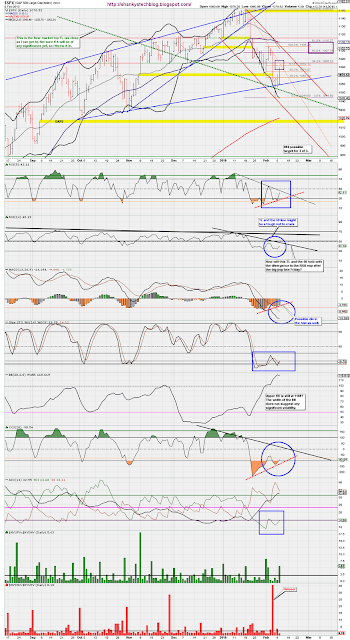 Gold - Still oversold and bouncing off of support. I think it consolidates for a short while.
Oil - Holding lower support line and coming off of oversold conditions.
Dollar - Overbought and reversing.
Natgas - Reversing off of upper TL and possibly breaking down. Low volatility expected as indicators are playing in the middle of the road.
EUR/USD - Look - if you measure it (and listen to all the bitching going on) it has completed and ABC corrective almost to the number. On the inverse the dollar has done the same. Let's see if we go into strengthen the Euro mode as the financial saga continues to churn.

This is a strange spot. I am seeing conflicting messages. The indicators want more but the numbers say the corrective is done. The dollar may have peeked and the EUR may have finished its fall. The FI markets may be the catalyst we are waiting on as everyone digests what China's move towards financial terrorism will do. The Greece saga is not over. I still have some small shorts from long ago and that tiny long that everyone thought I was crazy to play from the 1049 level. Is 1 of 3 is toast or did we just complete a corrective? The indicators to me say there is room for a 5 down left based on the position of the TL's, but if they give way we are in 2. The only hope I see of a 3rd wave scenario is that the weeklys still have room to fall. I remain cautiously positioned both long and short LOL (with more weight short).