The reaction to the jobs report may be a big deal, but fear of sovereign default is what is rocking the markets from Gold to the indexes.Employment report down again. 9.7% unemployment. Revision was massive. Fewer jobs and unemployment rate drops? That is NOT good at all. They are dropping off the rolls left and right cause no jobs are out there. Not sure if the BIG revision will get much attention (You know, since the government decided that they have miscalculated unemployment by almost 2 MILLION). ZH provides a deeper look into unemployment here. NSA U-6 is now at a record 18%.

I need to update a bunch of charts and get some good information out to you all, so look for a lot of updates thru the weekend.

E-mini 60m -Still in the blue channel down. I'll point out the lower yellow TL that was tagged this am and the market reversed off of it. the Yellow horizontal line it the 38% retracement. The futures hit a low of 1050.5 this am and have rebounded massively to 1063 at this time (it was at 1055 since I started writing here - now back to 1057). 1013 is the next major support level. The backtest of the bear market upper TL is somewhere near 1020 at this time.That may be the spot that ends 1. I would not be surprised to see a backtest of the broken green support line near 1085. That may end 2. Then 3 down with the authority to crash back thru the upper bear market TL. 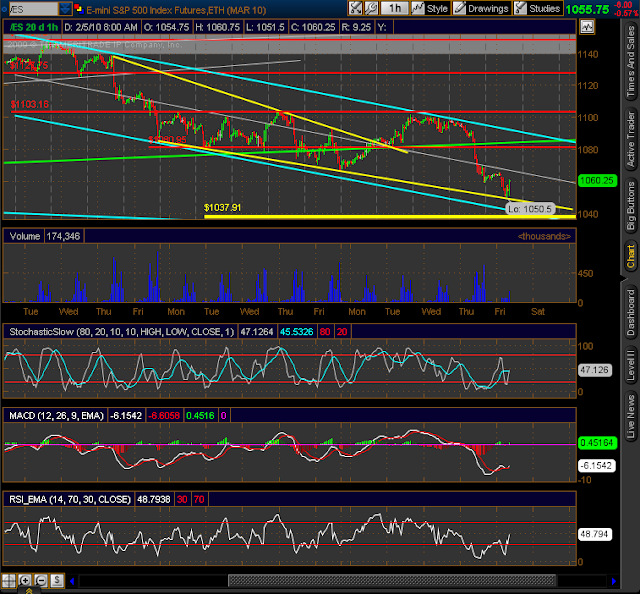 SPX 60m - Is this 2 of 1? Are we still in 3? Is this 4? Was that 5? LOL, bottom line is the indicators and market are oversold. the weekly RSI crossed my dreaded P3 tl and even got under 50 briefly yesterday. Not often I post a count, but here is a shot at it. Although the market is tearing north at this time the market is skating on thin ice. At this point any gains can and will be taken back very quickly from here on out. Sustained gains will be few and far between.  I would like to point out the possibility of a H&S (see red neckline) worth about 35 points. If it should form a right shoulder and reverse keep an eye on that to get a target.I forgot to mention the backtest of the black dashed TL that was th top TL of the original fall. Gold - I was calling 1066 as the support. It fell hard and stopped at 1059 yesterday, so I will take that. AH it tanked again with the futures to 1051, but had found new life and has rallied back 14 to 1064. Not positive if it will find resistance at this level or not. It will find resistance at 1077 for sure.
Oil - If you go back a few posts you'll find an oil chart. It fell right to the lower channel line and stopped like a bug on a windshield at 72.42. If it cracks the channel,  69 then 65 are the support levels. I do not think it sets any more higher highs, but that is up to the manipulators of black gold to determine.
Natgas - At upper channel resistance with bullish indicators on the daily chart. Looks to be in a mini channel up. Might be a corrective move.
Dollar - Took out the 38% retracement at 80.09 and is sitting on it right now. Might have also experienced a throwover of a rising wedge. Daily indicators overbought. If it was an ABC corrective that may have been it cause C is close to A and the 38% retracement has been hit. I still like 89 as the target.
EUR/USD - experiencing a throwunder of a falling wedge and has gone beyond a 50% retracement of the whole correction. EUR/JPY is way oversold.

Somehow the fear left the market this morning in a hurry. It looks like the currency corrections are overdue and I believe they will lead the markets back up for a period of time. As I mentioned, the market is on thin ice and can literally collapse at any time. All it takes is for one sovereign default and kaboom. I am still riding some shorts that I took most the profit on yesterday late. Not sure if I play long or not.

Two more registered followers and I crack triple digits. Anyone care to sign up and make that happen?

Have a good weekend.
Posted by Shanky at 9:16 AM